Withdrawal is one of the oldest methods of birth control there is. In the Book of Genesis in the Bible, withdrawal ("pulling out") is described as a method of contraception used by Onan when he ejaculates on the ground in the hopes he won't get his dead brother's wife pregnant after having sex with her. Umm...classy. Withdrawal and other similar methods like "coitus obstructus" can also be found, however, in early Sanskrit texts without such creeptastic context.

The most recent National Survey of Family Growth found around 60 percent of sexually active women have used withdrawal at some point in their lives. That bit and other discussion about current use of withdrawal can be found here. 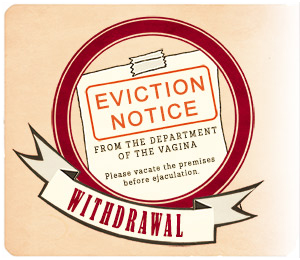 The What, the Why, the Where, the When, and the How-to: Withdrawal is sometimes called "pulling out" or coitus interruptus, latin for interrupted intercourse: it's when, during intercourse and well before ejaculation, a partner withdraws their penis from the vagina and ejaculates elsewhere -- and not anywhere near their partner's genitals. For those who like to geek, coitus reservatus is the latin term for someone trying to reserve ejaculation entirely or who withdraws from intercourse without ejaculating at all.

The pros are that it's free and it doesn't have any side effects. It can safely be combined with any other method of contraception. The cons are that many couples find it frustrating to have to cease sex to use it solely, and especially before orgasm, that it is a method which the person who may themselves become pregnant if it fails has no control over, and that it does fail often in typical use. For younger people, it can be particularly hard to use without mucking it up, since proper use requires having a good deal of knowledge and control from experience, experience younger people just don't usually have much of.

Some questions and answers about withdrawal:

When Good Birth Control Does Bad Things: When withdrawal fails, it is most often because a partner does not withdraw at all, does not withdraw in time (not seconds or moments before), well before ejaculation, or because even if they do withdraw, they still ejaculate on a partner's genitals. Much more rarely, pre-ejaculate may sometimes contain sperm cells picked up in the urethra from a previous ejaculation, and those sperm cells may be able to co-create a pregnancy.

To be clear: pre-ejaculate does not ever, all by itself, contain sperm. What can happen, though, is that on the way out of the penis, it can pick up sperm left over from a previous ejaculation. However, pre-ejaculate is understood to be highly unlikely to contain sperm if someone has urinated since their last ejaculation, and while few studies have been done on this, those which have have support that premise.

Withdrawal appears to be less effective for young adults than it is for older adults, likely due to both high fertility rates of younger people and, again, lack of experience with and control of the body. There are many studies on teen pregnancy which find withdrawal is a common method in those pregnancies, and that pregnancy among teens has been declining in large part due to increased use of far more effective methods of birth control, or in pairing withdrawal with other, more effective methods.

Younger people do tend to be more impulsive (the nice word for that is spontaneous, and it is a cool thing about y'all when it's not endangering you or others) than their older counterparts, and for plenty of young couples using withdrawal, it seems it sometimes doesn't take long to get to a time when a partner decides to go without withdrawing on purpose -- often without consulting their partner -- or wait until what seems like the very last minute -- and turns out to be too late -- "just this once." Anyone practicing withdrawal has got to have a lot of self-control, something that can tend to be difficult for people of any age at the same moment they're having a big orgasm.

Of course, no single method of contraception is 100% effective, even in perfect use. And it's sage to remember that there are situations -- be they financial or situational -- where for some couples it's only less effective (than most other) methods like withdrawal or spermicides which are available, or when the only method a partner can be talked into at a time is withdrawal. Withdrawal IS a method of contraception like all others: it's just one of the least effective compared to other methods. In general, it is usually best used as a backup method for another method, as it is one of the least effective of all available methods, even in perfect use.

Other methods which can be used with withdrawal:

Why would withdrawal be a good option for me? If any of the following are true: