One of the most recent of all available birth control options, the ring was first developed around the year 2000, and first approved for use in the Netherlands, in 2001.

The Vaginal Ring is: 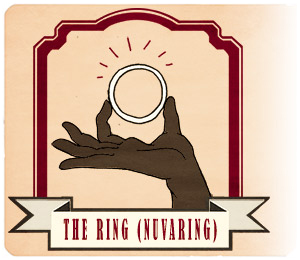 The What, the Why, the Where, the When, and the How-to: Like combined oral contraceptives or the patch, the ring (either Nuvaring or Annovera) uses two synthetic hormones -- estrogen and progestin -- to prevent pregnancy. Those hormones work in three ways: to prevent ovulation, to thicken cervical mucus to make sperm less able to get into the cervix, and by making the lining of the uterus thinner and thus, less hospitable for a fertilized egg to implant in. It works in all three of those ways to basically provide backup in case one of its mechanisms doesn't work at a given time.

The two vaginal rings work similarly in that they both release these hormones that are absorbed by the vaginal tissues. The vaginal ring is inserted into the vagina, the same way you'd insert a tampon or menstrual cup, and left inside the vagina for three weeks. At the end of that three week cycle, it's removed and left out for seven days, though you remain protected from pregnancy in that week. With the Nuvaring, you properly dispose of the used ring and insert a new one after those 7 days. With the Annovera, you take out the ring, rinse it, and keep it safe and dry in its case. After those 7 days, you then wash your hands and reinsert that same ring for the next 3 weeks (and it's good for one year, or approximately 13 cycles!).

Most users of the ring and their partners do not feel the ring during intercourse, but if you prefer, the ring can be taken out for sexual activities so long as it is out of the vagina for no longer than three hours (Nuvaring) or two hours (Annovera) during the weeks it is supposed to be in.

The vaginal ring contains a lower dose of estrogen than both the patch and than oral contraceptives: for those who want a hormonal method with estrogen, but want as low a dose as possible, the ring is a good choice. Those who have had issues with breast tenderness, nausea or headaches with other estrogen-based hormonal methods may find they experience less of those side effects with the ring. Other typical benefits of the ring include shorter, lighter periods, less menstrual cramping, a reduction of PMS symptoms, a more regular schedule of monthly bleeding, and the convenience of only needing to tend to your method once a month.

However, some people find that the ring causes vaginal irritation, vaginal odor, more frequent vaginal imbalances or infections, and other vaginal or vulval effects. And like most methods of hormonal contraception with estrogen, it is not advised for people who smoke, are over 35, are breastfeeding, diabetic, have a history of high blood pressure, cardiovascular disorders or high cholesterol. Those who suffer from headaches, especially migraines, or depression may also find that the ring makes either or both occur more frequently or intensely, and like any hormonal method, use may negatively impact vaginal lubrication, or sexual arousal or desire, and side effects may take a while to diminish after discontinuing the method. Rare but more serious side effects can include allergic reactions, blood clots, embolism or stroke, heart attack, gallbladder disease, thrombosis or eye problems. Be sure to discuss your health history and any current health issues with your healthcare provider so that they can be sure the ring is right for you.

To get the ring, you'll need to visit your sexual healthcare provider (who may also be your regular doctor) to obtain a prescription for the ring to fill at your pharmacy. Nuvarings tend to cost between $15 and $50 for each ring, while the out-of-pocket price for Annovera is much higher.

Also be aware that certain medications and substances may interfere with the effectiveness of the ring. If you are using or have, in your current ring cycle, used, any of the following it's best to use a backup method of birth control (like a condom) until your next new cycle:

The prescribing information for Annovera recommends that users only use water-based lube as other types of lube (silicone, etc) may damage the ring over time. This applies to external lube (coming from a packet or bottle) as well as any lubricant included in whatever barrier methods you use (condoms, etc).

Some questions and answers about the ring:

When Good Birth Control Does Bad Things: The ring may fail if it is not used on schedule, or left out during the off-week for longer than seven days, if used with certain medications that can reduce effectiveness, if it has slipped out without being noticed, and/or has been left out for more than three hours. The ring also should only be rinsed, if you must, with cold water, not warm or hot water, and packs of rings should be stored in cool places out of sunlight to assure they remain effective.

Personally, I think it's more cute than bad, but sometimes when the ring slips out, a partner can end up looking like an X-rated version of a game of horseshoes, with a ring around their penis. If you or your partner do not have a good sense of humor when it comes to sex, that may not be as appreciated as it might be otherwise. If you like laughter in your sex life, it may be a perk.

Other methods which can be used as a backup method with the vaginal ring:

Why would the vaginal ring be a good option for me? If any of the following are true: