The first IUD was developed and marketed in Germany in the early 1900s by Ernst Grafenberg (yep, the same dude whose name marks the Grafenberg Spot, or G- Spot: talk about a guy who couldn't seem to keep himself out of our pants!). In the United States, IUDs were approved for use in 1968; however, one IUD, the Dalkon Shield, turned out to be extraordinarily dangerous, leading to infection in many users, as well as several deaths. Because of that, all IUDs were basically off the market for a while as no one (understandably!) wanted to use them, and they clearly needed to be made differently in order to be safe for use. The very different -- and incredibly safe as well as thoroughly studied -- IUDs like we have today came onto the market first in the 1980's with the copper IUD. The Mirena IUD, an IUD which contains a small amount of localized hormone to help with common side effects of IUDs like spotting and cramping, was released into the market in the year 2000. 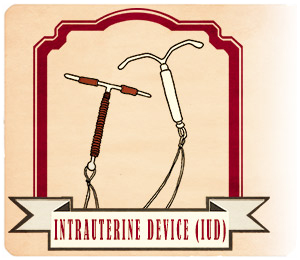 The What, the Why, the Where, the When, and the How-to: An IUD (intrauterine device) -- sometimes also called an IUS or IUC -- is a small device which is inserted into the uterus, through the vagina and cervix by a sexual healthcare provider, and which remains in the uterus until removed. Believe it or not, it's still a bit of a mystery as to how and why IUDs work, but we know for a fact and through a lot of study and use that they DO work, and are incredibly effective.

Basically, an IUD gives sperm the message that there's no vacancy in the uterus, so there's no sense in them trying to find an egg to shack up with in there: IUDs interfere with sperm mobility and egg fertilization. The copper in the Copper-T IUD is also believed to act as a sort of natural spermicide, and the hormone in the Mirena and Skyla IUDs also thins the lining of the uterus, thickens cervical mucus, and helps counteract the side effects of an IUD in general, helping to prevent heavier, more painful periods.

With either kind of IUD, it is not something partners will feel during sex, and those with an IUD in their uterus should not feel them either. Either kind does have a small string which dangles slightly out of the cervical opening so that you can check it's still in there every now and then (one risk of IUDs is that they may/can expel themselves), and cramping in the first few months of having one inserted is normal, but once your body gets used to the device, you should not feel it. IUDs are very easily reversible -- you just have them removed -- and while expensive at the outset (usually anywhere from $150 - $600 when insurance will not cover them), over years of use is the most inexpensive form of birth control there is.

For anyone using any IUD, you're going to need to be okay with a few basic things:

If you have never been pregnant before -- neither having had a child nor having terminated a pregnancy -- your healthcare provider may not advise an IUD because the size of your uterus can make insertion or wear less comfortable -- though usually only slightly -- and not having been pregnant before does put you at a slightly higher risk of your body expelling the device. Those issues don't present dangers, just possibly extra discomfort, or the inconvenience of paying a lot for a method only to have it not work for you, or to have to pay for it again and have it inserted again if it expels.

Not having been pregnant before also does not mean you can't have an IUD or it isn't safe for you to have an IUD.

Some providers also will not advise an IUD for people with high risks of STIs, such as those not in mutually monogamous relationships.

The newest research shows that in the first few weeks after insertion of an IUD, people are more susceptible to developing an STI and possible complications from an STI. High risks of sexually transmitted infections do present a real danger, since having a device in your uterus can potentially make any infection more serious and increase the risks of PID, particularly, again, around the time of insertion of an IUD.

So, it's important to be honest with yourself about your STI risks when considering an IUD, particularly in the three weeks after insertion. If you know that you can be sure to back up with condoms and be assertive with partners about doing so, you're good. Or, if you are as sure as anyone can be that you are in a mutually monogamous, long-term relationship where you both have screened clear for infections, okie-dokie. Otherwise, it might be better to consider a different method.

Too, because of concerns with uterine size and higher risks of infections, some healthcare providers will not okay any or some younger people for IUDs.  If your provider will not give you an IUD simply because of your age or because you have not been pregnant before, you can likely find another provider who will if you shop around.

You might hear your mother or grandmother voicing deep concern about IUDs, but that's because back in the day in the 70's, a different kind of IUD than we have now, the Dalkon Shield, which I mentioned up at the top of the page, resulted in over 300,000 lawsuits from those using them who were harmed due to septic spontaneous abortion (miscarriage complicated by a profound bacterial infection) -- some even died. This was largely due to highly irresponsible actions and lack of study on the part of the manufacturer. As well, the kinds of warnings we have now in terms of infection dangers, and awareness and carefulness on the part of doctors inserting the device when it comes to infection concerns, was not paramount as it is now.

The new generation IUDs we have today have been rigorously tested and have been widely proven to be safe.

The Copper-T IUD -- which is non-hormonal -- is a small, T-shaped piece of plastic which is wrapped with copper. It can remain in the uterus for as long as twelve years, but can be removed at any time, whether that's because a person wants to become pregnant, or because they want to switch to another method. People who have allergies or sensitivities to any part of the Mirena or Skyla IUD, or to levonorgestrel, people with any cardiovascular issues, people who want a method which can be left in place for as many as twelve years, or those who want to avoid any hormones, or be sure they still get periods every month may find the Copper-T to be their best choice.

The Mirena or Skyla IUD -- which contains a small amount of localized hormone  -- is also a small, T-shaped piece of plastic, but it is not wrapped with copper, and also contains small amounts of levonorgestrel, a non-estrogen hormone (so it's an okay choice for those who do not want to or cannot use estrogen). That hormone is not how the IUD itself works,  but rather primarily is there to help prevent a typical side effect of the Copper-T: longer, heavier or more painful periods. Most using Mirena or Skyla have shorter, lighter periods and some may stop having periods altogether, which some see as a bonus and others are not comfortable with. The Mirena can be left in place for half as long as the Copper-T: for up to five years, and the Skyla can be left in place for up to three. People who want lighter, shorter periods, the possible absence of periods (but accept spotting may still occur erratically), or who have allergies to copper may find the Mirena or Skyla to be their best choice.

Some more links about the IUD expressly for younger people:

When Good Birth Control Does Bad Things: The main reason IUDs fail is if and when the device falls out or expels without a person noticing, though this is rare. That's why checking that little string regularly is important. As well, if and when pregnancies do occur for IUDs users, they are more likely to be ectopic, which can be life-threatening, so it's also important to call your doctor if, when using an IUD, you ever have serious or constant abdominal or pelvic pain (and that also goes for possible PID), unusual bleeding (even more so than you might have with an IUD), or if you're just really not feeling well for a while.

You can use any other non-hormonal method as a backup with an IUD, but there really is no need to, given how highly effective it is. However, because of extra risks of complications from STIs in the first three weeks after insertion, backing up with condoms to protect your health during that time period is something we strongly advise.

Why would an IUD be a good option for me? If any of the following are true: