Condoms are at least 5000 years old. In their earliest incarnations they were made of animal hides, intestine or bladders, then later in fabric. In Japan, way back when, condoms were made of tortoise shell or animal horn. Ow. Condoms as we know them today were first developed when the vulcanization of rubber was introduced, in around 1840 by Charles Goodyear. (That technology also was responsible for the manufacturing of cervical barriers like the diaphragm.) That's right, you have the same guy to thank for great condoms as you do for great tires. 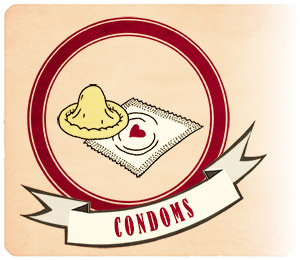 Outside Condoms (or, "male" condoms") are:

Inside Condoms (or, "female" condoms") are:

The What, the Why, the Where, the When, and the How-to: Condoms work by preventing sperm cells from having any contact with the vulva, because fluids are contained within the condom during both ejaculation and pre-ejaculation. Condoms are also the only method of birth control which reduce the risk of sexually transmitted infections and diseases. Used properly and consistently, they can be almost as effective as hormonal methods, and as a backup to any method, they just can't be beat. Viva la condom!

The outside, or male, condom is what most people think of and are familiar with when it comes to condoms: they are worn by a person with a penis (or facsimilie), rolled onto the penis before any genital contact, held in place by a ring at the base, and removed and disposed when genital intercourse is finished. The inside, or "female," condom is worn by the receptive partner, and the other partner inserts their body part into it during intercourse: the receptive partner inserts the condom into their vagina (or anus: female condoms, like male condoms, can also be used for anal intercourse), and then their partner inserts the penis into it during intercourse. After intercourse is through, a partner will remove the condom carefully.

For pregnancy prevention, condoms made of latex, polyurethane (great for those with latex allergies) or lambskin are all effective. However, lambskin condoms do not offer any protection against STIs, so they're not advised, since there's just little sense in going without the double-duty bonus condoms provide of protection against pregnancy AND infections, and let's face it, even if you're not vegetarian, there's something less than ideal about covering your genitals with lamb intestines when you don't have to. The inside condom is made of polyurethane or nitrile: it is a non-latex condom.

Because condoms are a barrier method, they are suitable for anyone who can't or doesn't want to use hormonal methods of birth control. Condoms are inexpensive, easy to use, and easy to find. They're also one of but three methods of birth control -- the other two being vasectomy and abstaining from intercourse -- which people with penises can use on their own, and a way those sexual partners can really share responsibility for birth control.

You can get condoms from a lot of different places: pharmacies, grocers, megastores, online vendors, student and community health centers and clinics (where they can often be found for free) and in other places. If you live in the U.S., you currently need a prescription in order to get the internal condom. When buying condoms be sure to avoid buying them in places where they may have sat on shelves or in hot or cold areas for a long time (such as in gas stations or vending machines) and store them properly yourself, outside of heat or cold or in places they might get torn inside the wrapper.

Condoms are best used with additional latex-safe lubricants designed for sexual use, both to provide greater comfort for both partners, as well as to help keep condoms from breaking due to friction and dryness. You can purchase lubricated condoms, though so little lubricant is on those condoms that additional lubricant from a bottle is usually needed. While spermicidally-lubricated condoms also may provide some lubrication, the World Health Organization has made clear that there is no evidence that spermicidally-lubricated condoms provide any additional protection against pregnancy or STIs compared with condoms lubricated with other products. They add that since adverse effects due to the addition of Nonoxynol-9 to condoms cannot be excluded, such condoms should no longer be promoted, and also suggest that Nonoxynol-9 not ever be used rectally/anally.

For detailed instructions on how to use an outside condom, see: Condom Basics: A User's Manual For help in shopping for condoms, check out: Your Map to the Condom Aisle For information on how to use an inside condom and other barriers, click here.

Some questions and answers about condoms:

When Good Birth Control Does Bad Things: Condoms fail when they are not used for all genital contact from start to finish, used improperly or if they break, tear or slip off: they most often fail because of not being used for all genital contact. If a condom fails, it will be fairly obvious, and emergency contraception can be used. Condoms can also fail if a partner withdraws without holding the base of the condom while they do, as the condom may slip off.

With either kind of condom, it's important that whoever is putting it on does not feel rushed or pressured to get it on in a hurry: it's much easier to mess up that way. So, if you're the partner of a condom user, be patient with your partner or give them a hand putting it in or on. That's far more helpful and supportive than pestering them about if they've got the damn condom on yet, already.

As well, do NOT use more than one condom at a time. Some people think that condoms will be safer if they double up and use two instead of one, when, in fact, adding a second condom adds extra friction and makes condoms far more likely to break.

Other methods which can be used as a backup method with condoms:

Why would condoms be a good option for me? If any of the following are true: