Spermicides are another of the oldest forms of contraception. The first written record of spermicide use was found to be in Egypt, in 1850 BCE, and included crocodile dung, yet again, a common ingredient in early pessaries, too. How happy are you not to have to put crocodile dung in your vagina? I know I'm stoked. 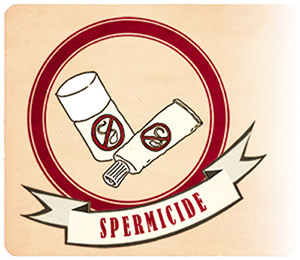 The What, the Why, the Where, the When, and the How-to: The way spermicides work is by using a chemical agent -- though through history, we have also had more natural spermicides: some people still experiment with natural spermicides now -- to make sperm less able to move and to reach the cervix, and to make the cervical opening less accessible to sperm. Think of spermicides as the bug-zappers of birth control. Spermicides are inserted into the vagina before intercourse, and do their thing if and when a person with a penis ejaculates or pre-ejaculates by rendering sperm cells impotent.

Spermicide alone is one of the least effective methods of birth control there is, even with perfect use. The perfect use rate for spermicides is lower than the typical use rates for most methods. It is far better to use in combination with another contraceptive, as a backup method, like with condoms.

But unlike some other methods, spermicides are very inexpensive, available over-the-counter, they can be used by those who can't or do not want to use hormonal methods or behavioral methods, and they are a decent backup method for almost any other method. They can be messy, and some people don't like them for that reason. Spermicides can also provide extra lubrication during genital intercourse, though it can also be irritating to many people's genitals. When it is an irritant, that lubrication may both dry up quickly and also leave either partner feeling even drier or more raw than they might otherwise because of irritated genital tissue.

In a similar vein, studies have found that spermicides increase the risks of acquiring sexually transmitted infections, including HIV, for some people, primarily those very frequently using spermicides, or who are having a lot of intercourse or many partners. Nonoxynol-9 can cause small, micro-abrasions of the genitals, which create greater opportunities for infections from viruses and bacteria. To play it safe, both in terms of STIs and for general vaginal health and comfort, if spermicides feel at all irritating to you or your partner -- if they leave either of you feeling rubbed a bit raw, sore, swollen or itchy -- it's probably best not to use them. As well, some HIV and STI prevention organizations suggest that non-monogamous couples not use spermicides because of the possibly increased risks of acquiring infections.

The World Health Organization has made clear that there is no evidence that spermicidally-lubricated condoms provide any additional protection against pregnancy or STIs compared with condoms lubricated with other products. In other words, condoms with spermicide have the exact same efficacy -- they are no more effective -- as condoms without a spermicidal lubricant added. They add that since adverse effects due to the addition of Nonoxynol-9 to condoms cannot be excluded, such condoms should no longer be promoted, and also suggest that Nonoxynol-9 never be used rectally/anally.

You can get spermicides from the same places -- and usually in the same aisle -- where you can get condoms: pharmacies, grocers, megastores, online vendors, student and community health centers and clinics (where they can often be found for free) and in other places.

When Good Birth Control Does Bad Things: Even when used perfectly, spermicides will often fail. But they are even more likely to fail if they are not inserted before intercourse, or early enough for some methods -- namely, film -- also sometimes called VCF -- or suppositories, which are not effective instantly like foam or jellies are. As spermicides are one of the least effective forms of contraception even in perfect use, if used, they are likely best used as a backup with another method.

Other methods which can be used as a backup method with spermicides:

Why would spermicides be a good option for me? If any of the following are true: