Hippocrates documented the use of Wild Carrot seeds as an oral contraceptive, and Native Americans used the herb Blue Cohosh similarly. In 7th Century China, oil and mercury were heated together to be used as an oral contraceptive, and in south and southeast Asia, unripe papaya was used. Throughout history, people have ingested a whole lotta different things with the aim of preventing pregnancy, some a whole lot harder to swallow, in every way, than a pill.

In America in the 1950s, birth control pills as we know them today were first co-developed by biologist Gregory Pincus, with funding and support from Katharine McCormick. Enovid was the first pill approved by the U.S. Food and Drug Administration as contraception in 1960, but even married couples didn't have the legal right in the States to use it, or other contraceptives, until 1965. Only in 1972 was birth control, including the pill, legalized for all citizens, including unmarried people.

According to the CDC, in the last ten years or so, around four out of every five Americans who can use the pill have used it. The combination pill is one of the most popular methods of birth control. 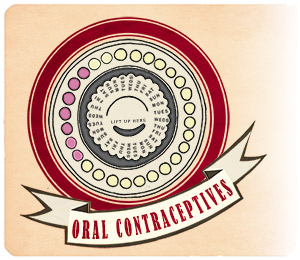 Some adolescent-specific studies on the pill have shown that it is less effective for adolescents in typical use than it is for adults. One study found that teens' ability to use the pill properly was as low as only 45% with the first three months of use, and only 33% with one year of use. So, if you're going to use the pill, as with other methods, be sure you study up on what proper use means and make it a goal to stick to it as best you can. If you're not sure you can take it correctly every single day, you can always back up with condoms: that gives you nearly 100% effectiveness and STI protection the pill does not provide.

The What, the Why, the Where, the When, and the How-to: The combination pill is called that because it uses two synthetic hormones -- an estrogen and a progestin -- to prevent pregnancy through an oral medication. Those hormones work in three ways: to prevent ovulation, to thicken cervical mucus so sperm cells are less able to get to or into the cervix, and by making the lining of the uterus less hospitable for a fertilized egg to implant in. It works in all three of those ways to basically provide backup in case one of its mechanisms doesn't work at a given time.

The combination pill is one of the most thoroughly researched and studied medications in history, so when your doctor makes sure you don't have any health conditions which would make the pill not-great for you, you can rest assured you are taking a method well-proven to be safe. However, certain people should not usually take the pill, such as smokers, those over 35, and those who are breastfeeding, diabetic or have a history of high blood pressure, cardiovascular disorders or high cholesterol. Be sure to discuss your health history and any current health issues with your healthcare provider so that they can be sure the pill is safe for you.

Some typical effects -- pro and con -- of the pill include lighter periods (though technically, people on hormonal methods have withdrawal bleeds, not periods), less cramping, decreased PMS symptoms, skin changes, an increase in the amount of time it takes to become pregnant after discontinuing, a more regular schedule of monthly bleeding, spotting between cycles, nausea, more frequent or more severe headaches, breast tenderness, mood changes or increased depression or anxiety, a decrease in sexual desire, vaginal dryness, water weight gain, and/or more frequent yeast infections. Some side effects had by a user of one pill may not be experienced with another. Rare but more serious side effects can include allergic reactions, blood clots, embolism or stroke, heart attack, gallbladder disease, thrombosis or eye problems.

In most countries, to get the pill, you'll need to visit your sexual healthcare provider (who may also be your regular doctor) to find out what brand is likely to be best for you and then obtain a prescription for the pill to fill at your pharmacy.

Some healthcare plans, national healthcare services and clinics will provide the pill for free to some or all people. For those who have to purchase pills themselves, they tend to cost between $15 and $50 each month.

To use the combination pill properly, you need to take one pill every day, ideally around the same time of day every day. It's also important to take your pills in order with most brands (monophasic types are an exception). If you don't take it at exactly the same time -- but still take it on the day you're supposed to -- that won't make your pills ineffective: it's just a safer bet to take it around the same time to keep you in the habit to reduce the risk of you spacing out a pill on any given day. As well, with a medication like the pill that's all about rewiring a very specific process in your body that changes daily, taking it as close to the same time each day as you can helps to be sure your hormonal levels are as regulated as possible. If you want to be as close as you can to a perfect-use effectiveness rate, you'll want to try and take your pills within the same three-hour window each day.

With combined pills, you have a 12-hour grace period before a pill is late, and a 24-hour period before you are considered to have missed a pill. So, if you normally take your pill at 3:00 PM, and one day took it at 6:30, no need for worries.

When you first start the pill, when it will be fully effective depends both on when you start it, as well as your own body chemistry. For most people who start the pill either on the first day of their period or the first Sunday after a period, any brand of combination pill will likely be effective after seven days of use, but here at Scarleteen, as many other credible sources suggest, we advise users to give their pills one full cycle before going without a backup to play it safe.

If you ever do miss a pill, be sure to follow the instructions in your patient information and make it up as soon as you know you have missed it.  If three or more pills in a pack have been missed or taken late, emergency contraception is advised.

For detailed instructions on how to use your particular combination pill, read and refer to the patient information insert that comes with your pill packs.

Certain medications and substances may interfere with the effectiveness of the birth control pill or the pill may interact with the effectiveness of that medication. Always tell any healthcare provider suggesting or prescribing you medications that you use oral contraceptives. If you are using or have, in your current pill cycle, used, any of the following it's best to use a backup method of birth control (like a condom) until your next new cycle:

Know also that if you are currently bulimic, and cannot control your urge to vomit at any given time that the pill will not be a good choice, as it may be less effective if a person is currently vomiting for any other reason or has diarrhea.

Some questions and answers about the pill:

Taking the first pill in any given pill cycle late, or missing it, creates bigger risks than missing a pill at other times: in fact, a few cycles of the pill, then stopping it and starting intercourse the first day without is even used sometimes as infertility treatment! So if you start any given pill cycle late, be sure and use a backup method for at least the first week of that pill pack. If you're using the pill, make sure you are getting refills well in advance so that you don't ever risk starting a new pack late.

When Good Birth Control Does Bad Things: The combination birth control pill may fail if it is not taken on time each day (if pills are taken late or missed, especially if more than two pills in a pack are missed or late), if pills are not taken in sequence, if a person extends the placebo week of the pill too long (past seven days) at any given time, if a person stops taking their pills during the active pill phases, if it is used without a backup method when a user starts the pill for the first time, or if taken in conjunction with other drugs or substances which may interfere with it. While nearly all BCP failures are simply due to not taking the pill every day without fail, there are -- though they are rare -- some people for whom, even when taken perfectly, the pill does not work for.

Other methods which can be used as a backup method with the combination pill:

Why would the combination pill be a good option for me? If any of the following are true: