The birth control patch was first approved for use in the United States in 2002. It's an adhesive square that, when placed on the body, transdermally (through the skin) administers a combination of hormones, including estrogen, to prevent pregnancy. Those hormones suppress ovulation (keep your body from releasing an egg each month), thicken cervical mucus to interfere with sperm mobility, and also thin the lining of the uterus, making it less hospitable for a fertilized egg to implant in. It works in all three of those ways to basically provide backup in case one of its mechanisms doesn't work at a given time.

The first commercially available transdermal patch was approved by the U.S. Food and Drug Administration in December 1979: it administered scopolamine, for motion sickness. 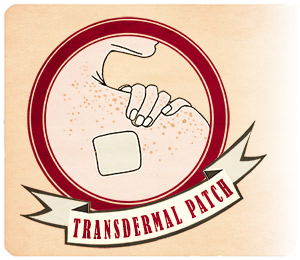 The Contraceptive Patch is:

The What, the Why, the Where, the When, and the How-to: You use a patch by opening a new patch and putting it, like a band-aid, on a clean part of your body where it's most likely to stay (you want to choose places that don't rub up against the edges of clothing a lot, for instance), and where you feel most comfortable having it. One place it should NOT be put is on your breasts: that could create breast health problems. And if you use body lotions, be sure to put the patch on before you put on any lotion: lotions or oils can keep it from sticking and staying on properly.

Every week -- every seven days -- around the same time, you're going to take off your old patch, and put on a new one in at least a slightly different spot. You'll do that for three weeks in a row, then have one week where you don't have a patch on, but you will still be protected against pregnancy for that week. After that off-week, you go back to putting a patch on once a week for three weeks.

Certain people should not use the patch, such as smokers, those over 35, and people who are breastfeeding, diabetic or have a history of high blood pressure, any cardiovascular disorders or high cholesterol. This is true for all methods with estrogen, but is even more so for the patch as it contains substantially more estrogen than other methods: around 60% more than low-estrogen combination pills. People who are over 198 pounds should also be aware that the patch may not be as effective for them. Be sure to discuss your health history and any current health issues with your healthcare provider so that they can be sure the pill is safe and likely to be effective for you.

Too, people who are looking for a hormonal method to suppress periods should probably not use the patch to do that: it has not been studied yet for continuous use, and with the higher dose of estrogens, could pose serious health problems used continuously. If you are looking to suppress periods, first talk to your doctor (particularly if you are in your teens, as doing so may pose extra health risks for you; teens have not been studied for suppression), then if your doc gives you the green light to suppress, consider other hormonal methods such as the pill, the implant or the Mirena IUD to safely do so with.

To get the patch, you'll need to visit your sexual healthcare provider (who may also be your regular doctor) to obtain a prescription to fill at your pharmacy. Patches tend to cost a bit more than birth control pills, usually around $35 - $50 a month.

For detailed instructions on how to use the patch, you can refer to the insert that comes with it, or see the information from the manufacturer here.

Also be aware that certain medications and substances may interfere with the effectiveness of the patch, or the patch may interfere with the effectiveness of other medications. If you are using or have, in your current patch cycle (that being the four-week period of three patch weeks and the off-week), used, any of the following it's best to use a backup method of birth control (like a condom) until your next new cycle:

Some questions and answers about the patch:

When Good Birth Control Does Bad Things: The birth control patch may fail if it is not replaced every week as required or if the seven-day off period is extended longer than seven days, if it is not used with a backup method within the first seven days to one month, if taken in conjunction with other drugs or substances which may interfere with it, or if the patch slips off and is not replaced within 24 hours. If and when a patch slips off, you can try and put it back on, but if it isn't sticking, you'll need a new patch. Don't try and MacGyver it by using tape or glue to stick an old patch on.

Other methods which can be used as a backup method with the Contraceptive Patch:

Why would the patch be a good option for me? If any of the following are true: