Okay, look: the history of Depo-Provera is seriously hideous, and there is just no getting around that. Its first clinical trials, done between the 1960s and 1970s, were done mostly on black, rural and/or low-income women, and women in developing nations, and in many cases without their consent, or even their knowledge. For these and other concerns, when the FDA approved it in 1992, it was with strong objections from the National Women’s Health Network, the National Black Women’s Health Project, and the Women’s Health Education Project. That history aside (though it certainly is not the kind of history to just blow off), Depo-Provera (also called "the jab" or 'the shot") is a highly effective form of contraception used by more than a million people in the United States alone. 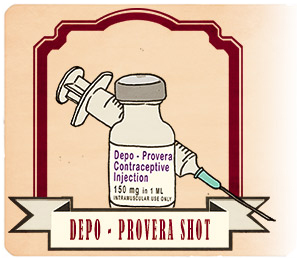 The What, the Why, the Where, the When, and the How-to: Depo-Provera, DMPA, or the Shot, is a progestin-only hormonal method of birth control which is injected into the arm or bottom every three months, but which provides highly effective protection against pregnancy every day. The hormone in Depo-Provera prevents pregnancy by thickening cervical mucus, impairing sperm mobility so it's tougher for them to reach an egg in the uterus, as well as by suppressing ovulation, the release of an egg.

So long as those using it are sure to get their injections on time, Depo is very goofproof: other than getting those shots, there is no possibility of user error. A backup method of birth control is only needed within the first 24 hours of the first injection so long as the injection time is scheduled properly by your healthcare provider.

Because once you get that injection, you not only can't discontinue use for three months, and because side effects of Depo-Provera can continue for many months to even years after use, we also usually advise that people try a more easily reversible method of progestin-only contraception first, like the minipill, before trying Depo. That way, if you find out you and progestin don't do so well together, you won't have to live with side effects you don't like for so long.

Depo use is associated with bone loss, which is a big concern for everyone, but particularly for adolescents and young adults, whose bones have not stopped growing. Ideally, it is likely best for teens to look to other methods first, and if Depo still turns out to be a sole option or looks like the best one, it's vital that younger users be sure and take a calcium supplement and eat calcium-rich foods daily to help protect bones. Depo is also not usually suggested for very long-term use because of these bone concerns.

Many people using Depo will gain some weight, and for some, substantial amounts of weight. As well, if you're not okay with unexpected bleeding or spotting, or unpredictable or absent periods, the shot probably isn't a good choice for you. Lastly, people who suffer from depression often report that Depo made their depression worse, even though it isn't specifically contraindicated for those with depression.

While many who cannot use other hormonal methods of contraception, such as smokers, people over 35, or people who are breastfeeding, can choose Depo, Depo is not right for everyone. Those with Cushing's Syndrome, who have had unexplained vaginal bleeding, breast cancer or other issues may not be a good fit for the shot. Be sure to discuss your health history and any current health issues with your healthcare provider so that they can be sure the shot is safe for you to use.

Why would someone use Depo-Provera? The benefits of Depo-Provera are that it is a highly effective method with little room for user error, it is a method a person does not have to think about at the time of sex, but only every three months, it decreases menstrual cramping, may cause periods to be scanty or absent, it is not affected by most medications, it can be used by those who cannot or do not want to use hormonal methods with estrogen, because it works within 24 hours after the injection, or because someone wants a hormonal method, but cannot use methods with estrogen.

To get Depo, you'll need to visit a sexual healthcare clinic or provider (who may also be your regular doctor) to have your injections administered. Injections usually cost around $35 - $100 for each; $140 to $400 for one year of injections.

Some questions and answers about the Depo-Provera shot:

When Good Birth Control Does Bad Things: Depo is a highly effective method of birth control, which will usually only fail if people do not get their injections administered on time. For those concerned with weight gain, a large study was recently released which verified that weight gain can be a particular issue with Depo: in that study, those using Depo gained around 11 pounds on average during use, unlike with oral contraceptives, where there is typically no weight gain, or just a couple pounds of water weight, which is often temporary.

Other methods which can be used as a backup method with Depo-Provera (even though, so long as it is used properly, a backup is not usually needed):

Why would Depo be a good option for me? If any of the following are true: