While withdrawal and abstinence have likely been practiced for thousands of years worldwide, current methods of natural family planning -- such as those accounting for cervical mucus and basal temperatures -- are likely only 20th century inventions, following the advent of scientific developments and a greater understanding of fertility and how it all works. The "rhythm method" was in some use in the 19th century, but was most frequently ineffective, probably since we still did not have enough information about fertility then to have a good sense of how the timing of fertility typically worked. 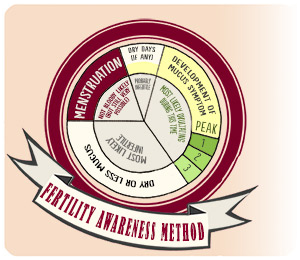 The What, the Why, the Where, the When, and the How-to: Fertility awareness methods work by either only having genital intercourse during times when a person capable of becoming pregnant (the person with the uterus) knows or strongly suspects, through different ways of daily observation, record-keeping and specific analysis, that they are not likely to be fertile, or by being sure to use a backup method of birth control for any intercourse during most fertile times.

We discourage our younger users from trying to use fertility awareness as a sole method of birth control. In order for these methods to even have a chance of working a person must have regular cycles which have been regular for some time  - ideally, at least a few years -- as well as the ability to chart and record fertility signals every single day, and a partner who is deeply committed to doing their part to practice the method properly. It's normal for it to take up to five years for fertility and menstrual cycles to regulate, so even for Scarleteen users who began menstruating on the early side, it's not likely to be anything anyone can reliably use as a sole method until they're at least in their later teens, if not their twenties. Too, to use FAM effectively as a method of birth control, a person usually needs to chart daily for at least six months before using it, a waiting period which young adults who want to become sexually active may not find practical or realistic.

As well, many Fertility Awareness advocates teaching older adults will usually make clear that it is not a good method for any couple or person who is not prepared for a pregnancy, even though, when practiced to the letter, it can be a highly reliable method. So, overall, we're more inclined to suggest using fertility awareness either just to know more about your body, as part of a combined method for users who do have regular periods and can handle the rigors of FAM (where it's used as or with a backup method), or for people trying to become pregnant, rather than trying to prevent pregnancy.

When we talk about Fertility Awareness here we are not usually talking about the rhythm method, or basing ideas on when a person is most fertile only by averages for fertile times. While that method can be effective for some people, because people's cycles vary so widely, it is just not as reliable as other methods of FAM: the standard days method is cited by Contraceptive Technology as 95% effective with perfect use, while other kinds of FAM are as much as 99% effective with perfect use. For those for whom the rhythm method -- sometimes called the standard days method -- is their only option, using a tool like Cycle Beads may help make that practice more reliable.

So, what ARE we talking about? People using FAM effectively do so by using a number of different or combined methods each day, at the same time every day, to record and determine when it is most likely they will be fertile through sings her body gives about fertility. Those methods are any or all of the following: charting patterns of cervical mucus, taking daily basal body temperatures (BBT) and/or direct cervical observation daily with the use of a mirror and speculum. Bodies do change daily in subtly observable ways in response to the fertility cycle: when those differences are observed and recorded accurately over time, eventually -- so long as cycles do not change or shift much -- a person can then draw conclusions from those observations to find out when they are or are most likely to be most and least fertile. Those using FAM will then abstain from any genital intercourse during and around those times, or when they do not abstain, will use a reliable method of contraception. Because the times to abstain are during the times when a person is most fertile, it's vital that any intercourse during those times only happens when using a highly reliable method properly. Since you can't have a natural fertility cycle while using a hormonal method (in other words, you can't use FAM methods when using hormonal methods, as they suppress the fertility cycle), those are out, so we'd suggest something like combining condoms and a diaphragm, for example.

Couples may also choose to use FAM as a backup method, such as by using condoms as a method of birth control for all times a person capable of becoming pregnant is NOT likely to be fertile, then abstaining completely during most fertile times. This is one way FAM can be an excellent combined method for young people whose cycles are regular, and who don't want to or can't use hormonal methods.

Benefits of FAM can include that, save pregnancy if and when it occurs, there are no side effects, it allows a person to have an incredible depth of knowledge about their reproductive cycle and body (which can be great even if you're already using another reliable, non-hormonal method simply because it can help you know when you just don't need to be freaked out about a risk -- cervical self-exams can also help you keep a lookout for vaginal infections), it can be a good way for couples to mutually commit to preventing pregnancy, and besides the cost of a basal thermometer, a speculum and mirror, paper and pen, it's free. For those whose religions or belief systems prohibit any hormonal or barrier methods, it is a method usually more effective than withdrawal, and one which also allows the person who can themselves become pregnant more control. During infertile or less fertile times, for couples using it as a sole method, besides double-checking that it is a likely safe time, FAM does not interrupt sexual activity.

Not-so-greats include that it does require the cooperation of a partner, and often, the abstinence of a partner and oneself, a daily commitment to charting over time at the same time each day, and that there is a high risk of user error, especially for those without supervision.

Lately we have been seeing some partners trying to do fertility charting for someone else: where they don't have a uterus or a cycle, and are trying to passively or actively chart for the person who does.  Suffice it to say, doing this without the permission and cooperation of the person whose body it is about is anywhere from kind of creepy to okay, but not very effective.  Charting is something a person with the cycles of their own to chart can include a partner in, but it's really not something to try and do when it's about someone else's body, especially without their input and permission. And, like any method that is about someone else's body, it's never okay to try and coerce someone into using this, or any other, method because you want to, but they don't.

For detailed information about how to do FAM right or get more information, see:

It is also not advised to use FAM as a birth control method without the supervision and help of a teacher or coach, or, at the very least, a great book on the method. Two books we'd suggest for those interested are: Taking Charge of Your Fertility, by Toni Weschler, and The Garden of Fertility, by Katie Singer.

When Good Birth Control Does Bad Things: Because it is an entirely human-controlled method, with no added chemicals or devices, when FAM fails, it's 100% because of user error, either because a person didn't keep up with charting, charted incorrectly, didn't make the correct conclusions based on their observations, or because they or their partner did not abstain or back up with a highly reliable method of birth control during fertile times.

Because many couples who use FAM will often have intercourse during infertile times unprotected, and because FAM requires the deep commitment of a partner to the method, as well as a readiness to become pregnant, it is generally best for those who are in long-term, monogamous and committed relationships where both partners are also known -- through testing and time -- to be STI-free.

Other methods which can be used as a backup method with FAM:

Why would FAM be a good option for me? If any of the following are true: