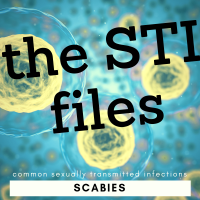 Stat: This disease has bothered people for thousands of years, but it wasn't until 1687 that someone figured out what was causing that infernal itching. This makes scabies one of the first health problems to be shown to have an actual, diagnosable cause. Science is awesome!

What is it exactly? Scabies ("skay-bees") is a skin disease caused by a mite called Sarcoptes scabiei. The female mite burrows into human skin and lays about 3 eggs a day. Some of those eggs hatch and grow into adult mites, and so the cycle is repeated over and over unless it's treated.

About how many people have it? It's hard to say. The numbers change all the time because scabies, when treated properly, goes away quickly. We do know the numbers are in the millions, worldwide ,and that infection rates in the United States increase every year.

How is it spread? Scabies is spread through prolonged, direct physical contact. Basically, your skin has to spend a good deal of time pressed up against the skin of someone who has scabies. Just being in the same room doesn't spread scabies unless you're pressed right up against someone (or several someones) for a long time. This is why there's often a higher scabies incidence in overcrowded cities.

This is also why quick physical contact like just shaking hands isn't very risky, but holding hands for a while can be.

Other transmission risks include sharing towels or blankets or wearing clothes that weren't washed after someone who has scabies used them.

Note: Scabies can't live outside the body for longer than 72 hours at the most, and they can't reproduce when they're not being hosted by the human body. So, it's beyond unlikely that you'll get scabies from a toilet seat or doorknob.

What are its symptoms? The first sign of scabies is usually intense itching that won't go away no matter what you do. You'll usually also see areas of small red bumps like pimples or lines like small scratches on your skin. This is where the mite has burrowed in.

Scabies prefer warmer areas such as skin folds or under tight clothing, especially the area between the fingers, the bend of the elbow, under the arms, the wrists, the buttocks or waistline, around the nipples, and on the penis, so you're more likely to find signs of scabies in those kinds of places. Mites also like to be under rings, bracelets, watchbands, and fingernails. They are rarely found above the neck.

Most people who get scabies will get only about 10 to 15 mites, though it will probably feel like more because of how itchy it is.

There's a more severe form of scabies, called crusted or Norwegian scabies. It's called Norwegian scabies because the person who identified it was from Norway, not because you can only get it in Norway.

Most people who get crusted scabies are immuno-compromised -- have a weakened immune system -- because of age or illness. The main symptom of crusted scabies is patches of thick, crusty (hence the name!) skin. Crusted scabies is less itchy, but way more contageous, than plain old scabies.

How is it diagnosed? A healthcare provider may be able to diagnose scabies by looking at your skin. However, this can sometimes lead to incorrect diagnosis, mistaking other skin conditions or allergies for scabies; whenever possible, a microscopic analysis should be done. When they do that, the provider will take a small scraping of your skin and look at it under a microscope.

Is it treatable? Yes. Scabies is usually treated with a prescription cream that you spread all over your body and leave to do its work for 12 hours. During this time, all bedding and dirty clothing should be washed in hot water and then put in a hot drier. Everyone who might also be infected should also be treated during those same 12 hours. This includes people who live with you, people you have close physical contact with, and all sexual partners.

Be sure to follow your healthcare provider's treatment recommendations, and talk to your pharmacist if you have any additional questions or concerns.

It can take a while after treatment for the symptoms to go away, so it's a good idea to be rechecked by your healthcare provider to make sure there are no more mites. If the itching is still a problem, you can take an anti-histamine or use a hydrocortisone cream.

Is it curable? Yes, but you can get it again. Scabies also usually doesn't cause anything more than discomfort and inconvenience, though people who scratch the bites may get a bacterial infection that will need treatment with antibiotics.

How can we protect against it? It's hard to protect against scabies. You can start by not using anyone's unwashed towels, or wearing their unwashed clothes. Avoiding prolonged skin-to-skin contact -- like lying around naked or intercourse -- can also help prevent transmission. Talking openly with your sexual partners about STIs, agreeing to be honest with each other about any itching or other symptoms, and agreeing to get checked out and treated right away will also keep your risk level on the lower side or make it easier to get rid of fast if scabies shows up.