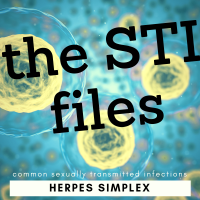 What is it exactly? Herpes is an infection with one or both of the herpes simplex viruses: Herpes Simplex I (HSV I) or Herpes Simplex II (HSV II). HSV I commonly infects the mouth and is the cause of cold sores while HSV II commonly infects the genitals. However, both HSV I and HSV II can affect both the genitals and the mouth and it is possible to be infected with both types of herpes at the same time.

How is it spread? Herpes viruses are primarily spread by skin-to-skin contact. Herpes is most easily spread when sores are present, but even if someone does not have symptoms, they can still spread herpes to other people, and transmission can also happen via oral secretions (like during oral sex) including when someone is asymptomatic.

To get herpes, an area of your body that is susceptible (able to be infected) must touch part of someone’s body that is already infected (whether or not sores are present). The parts of the body that are susceptible to herpes include mucus membranes (like in the mouth, genitals, anus, and rectum) and areas of skin with open cuts or abrasions.

Herpes is transmitted most often by skin contact, usually by kissing, and by oral, anal, vaginal, and manual sex. Since herpes is most commonly spread by skin contact, body fluids like blood or semen do not need to be present for herpes to spread. Herpes can be spread from one part of the body to another – for example, if you have herpes sores on your mouth and you touch your mouth and then touch your genitals, you can spread the herpes infection to your genitals (you can spread herpes to other people this way, too). But it also can be spread via body fluids, including when someone doesn't have any sores.

What are its symptoms? Most people with herpes simplex do not have symptoms, regardless of whether they have HSV-I, HSV-II, or both. When symptoms are present, they include clusters of crusty sores on the infected area (usually the lips, genitals, and/or anus). These sores tend to be itchy or painful. The first time someone has a herpes outbreak, they might have flulike symptoms like swollen glands, fever, and fatigue.

Not everyone has recurring outbreaks, and if they do, the first outbreak tends to be the most severe. Over time, outbreaks usually become milder, shorter, and less frequent.

How is it diagnosed? A medical provider might diagnose you with herpes based on your symptoms. Sometimes, providers will want to confirm the diagnosis with a lab test. If sores are present, they can be swabbed and sent to a lab to test for herpes. There are also blood tests for herpes that look for antibodies your body makes in response to infection – these tests are not used for routine STI testing, but are sometimes used to confirm a suspected infection.

Should I get tested for herpes? The short answer is probably not, unless you’ve had an outbreak. The Centers for Disease Control and Prevention do not recommend routine testing for herpes. According to the CDC’s latest STI screening recommendations, getting tested for herpes is only necessary in these specific cases:

Why isn’t routine testing for herpes recommended? Routine STI testing is only recommended for infections that can cause serious health problems if left untreated. For the vast majority of people, herpes is not a threat to their health and does not require treatment. If we all got routinely screened for herpes, most of us would be positive but these results would not require any specific action – in other words, testing for herpes wouldn’t have a major impact on most people’s health, whereas testing for things like HIV has a very real impact on people’s health.

If you are concerned about a herpes exposure, talk to your medical provider about whether you need to get tested. Not all STI clinics provide herpes testing, so you might need to go to a primary care physician to get tested.

How is herpes treated? Not everyone with herpes has symptoms that are severe enough to need treatment. For folks who have severe symptoms (like frequent, painful outbreaks of sores), treatment involves taking antiviral drugs. These drugs cannot cure herpes, but they can reduce the frequency and severity of outbreaks and reduce the risk of spreading the infection to others.

People who have oral herpes (also called cold sores) will sometimes use lip balm or other ointments to help reduce the pain and irritation of an outbreak. These ointments are not antiviral treatments and do not reduce the severity of an outbreak or prevent herpes transmission. However, if these products help make you more comfortable during an outbreak, there is no harm in using them.

Is herpes curable? There is no cure for infection with herpes simplex virus – once you are infected, the virus will remain in your body for your entire life, even if it is not causing symptoms. A person can still have a herpes outbreak even after many years of not having symptoms. Treatment with antiviral drugs reduces the severity of symptoms but does not cure herpes.

Can it affect fertility? Herpes does not cause infertility. However, herpes can cause birth complications. If a pregnant person has genital herpes, the infection can spread to the infant during a vaginal birth. Herpes can be very serious in infants. However, having genital herpes does not mean someone cannot give birth – antiviral medications and C-sections can be used to reduce the risk of spreading herpes to the infant.

Can it cause death? With the exception of infants and people with severely compromised immune systems, herpes is not life-threatening.

Can herpes cause any other health problems? The main health risk of herpes is that having active sores on your mouth, genitals, and/or anus makes it easier to transmit or be infected with HIV. This is true whether the sores are caused by herpes, syphilis, physical injuries like friction, or any other cause. However, the biggest risk associated with herpes is shame, stigma, and misinformation.

There are some viruses that, for better or worse, most human beings on the planet are just going to get. Just about everyone has to deal with common colds and stomach bugs at some point in their life, and there isn’t any shame or stigma associated with these. Similarly, there are plenty of common infections that have no cure and stay in our bodies forever – like chickenpox (a close relative of herpes simplex) that can reoccur as shingles later in life. The reality of herpes is that it’s just a really common, usually harmless skin condition that most people have – so why do so many of us freak out about it?

There’s not an easy answer to this question, but you can read more about the history and culture of herpes stigma.

How can we prevent herpes? Because herpes can be spread by skin-to-skin contact, there is no way to prevent herpes that is 100 percent effective – even if you’ve never kissed or had any kind of sex with anyone, there’s still a good chance you were exposed to HSV-I as a child (lots of us get HSV-I when we’re very young from being kissed by adults).

That being said, there are a few things you can do to reduce your risk.

When a person has herpes, they are most likely to spread it to other people during or just before an outbreak. If someone is having a herpes outbreak (or feels like an outbreak is coming on), they can reduce the risk of spreading herpes by using barriers (gloves, condoms, or dental dams) for sexual contact. If someone has herpes sores around their mouth, they can prevent transmitting herpes by not kissing during the outbreak and by using barriers for giving oral sex. If we or a partner has herpes, using barriers for genital intercourse or oral sex regardless of whether there is an outbreak is what's most safe besides abstaining from those kinds of contact.

Although there isn’t a ton we can do to prevent herpes infections, educating ourselves, not freaking out or shunning someone when they disclose that they have herpes, and confronting misinformation are all things we can do to stop the spread of herpes stigma, which causes a lot more harm to folks than the infection itself.