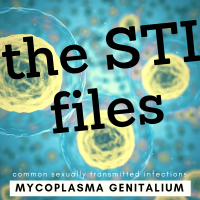 Stat: Mycoplasma genitalium (sometimes called Mgen) was discovered in 1981. It's estimated that 1-2 percent of the adult population has the infection (that's roughly 2.5 million people in the United States alone). The CDC put Mgen on its list of "Emerging Issues" in 2015 due to its rising rate in the population, and its relative difficulty in diagnosis and treatment.

What is it exactly? M. genitalium is a type of bacteria that lives and grows on the surface cells the urinary tract (the tube inside the body that pee comes through). It's a part of the Mollicute family of bacteria, which are characterized by not having a cell wall (not by being adorable). For the epidemiology geeks out there, its cousin, Mycoplasma pneumoniae, is responsible for "walking pneumonia", a milder version of the respiratory infection that used to be really common in the population before the discovery and wide use of antibiotics.

What are its symptoms? Like most other sexually transmitted infections, most of the time an infection of Mgen doesn't show any symptoms. When it does, it causes the standard array of "something's just not right" symptoms: for people with penises, that means burning or itching while urinating and/or watery discharge from the tip of the penis. For people with vaginas, an Mgen infection may present with burning or itching while urinating, unusual discharge, pain or bleeding during sex, and general pain in the pelvic area.

About how many people have it? Recent studies suggest about 1 in 100 people have the infection, and women have a slightly higher risk of infection than men. According to the British Association for Sexual Health and HIV (BASHH), individuals that are at higher risk for infection are young adults, people who smoke, people of color, and people with many sex partners. Mgen often presents with a co-infection of another STI, such as chlamydia or HIV.

How is it diagnosed? In the United States, there is no FDA-approved test for Mgen that is widely used in doctor's offices. Diagnosis requires a specific test called a nucleic acid amplification test (NAAT), which looks specifically for the genes found in these bacteria. Doctors who suspect this infection and want to test for it might take a urine sample or a urethral/vaginal/rectal swab to be sent out for testing.

Is it treatable? Yes. Treatment is a little bit more complicated than your average bacterial STI, though, as a lot of the antibiotics that are normally used (penicillin, etc) don't work because of the lack of a bacterial cell wall. However, there are other antibiotics that can be prescribed that are a very effective treatment.

Is it curable? Yes, as long as healthcare instructions are followed correctly, including taking antibiotics exactly as directed (and don't forget to always, always finish all your antibiotics!), and taking a follow-up test after treatment to make sure that the infection has been completely eradicated. Providers also typically suggest waiting to be sexually active a full 7-14 days after starting treatment to ensure that the infection is not transmitted to others.

Can it affect fertility? Possibly. Studies are still being done about the cause-and-effect relationship between Mgen and fertility issues, but we know for sure there is a direct link between an Mgen infection and conditions such as uretitis (swelling and irritation of the urethra), cervicitis (swelling and inflammation of the cervix), and pelvic inflammatory disease. If these conditions are left untreated for long periods of time, they can increase the risk of developing reproductive complications such as cervical cancer or infertility.

How can we protect against it? The use of condoms and other barrier methods during genital-genital or genital-anal contact can greatly reduce the risk of Mgen transmission, but it won't fully prevent it. Just like with other infections, the only way to be 100 percent sure that you're not exposing yourself is avoid or choose not to engage in activities that present a risk.