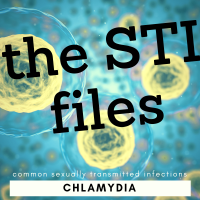 Stat: Chlamydia is the most common sexually transmitted bacterial infection in the United States, with about 3 million new cases reported annually. Chlamydia ("cla-mid-ee-ah") is so common in young women that, by age 30, 50% of sexually active women have evidence that they have had chlamydia at some time during their lives.

What is it exactly? A bacterial infection which infects the cervix initially and can spread to the urethra, fallopian tubes, and ovaries in people who have a vulva. It can cause chronic bladder infections and pelvic inflammatory disease, ectopic pregnancy, and permanent infertility. Chlamydia can also infect the throat when acquired through oral sex.

For people who have a penis, chlamydia infects the urethra and can spread to the testicles, which can cause male infertility. According to Planned Parenthood, chlamydia can also lead to Reiter's syndrome, especially in young men, which involves eye infections, urethritis, and arthritis. One in three men who develop Reiter's syndrome become permanently disabled.

About how many people have it? About 3 million cases are reported each year in the United States alone. From 1989 through 2008, reported chlamydia rates rose from 102.5 to 401.3 cases per 100,000 population in the United States (CDC, 2009). That increase is partly attributed, to improved screening and reporting. However, in young people ages 15-24, the reported rate of Chlamydia is four times that of the general population, so it is known to be a particularly widespread infection for those in their teens and twenties.

What are its symptoms? In most cases, chlamydia shows no symptoms. When symptoms are present, they may include: pain or burning while urinating, vaginal bleeding, painful vaginal intercourse for people who have a vulva, spotting between periods or after or during intercourse, stomach or abdominal pain or nausea, fevers, swelling or pain of the rectum or cervix, or in people who have a penis, of the testicles or fertility problems. People who have a penis may also experience discharge from the penis.

How is it diagnosed? By a urine or tissue sample from the genitals or throat.

Is it treatable? Yes, with antibiotics. It is also usually very easy to treat. However, ALL partners MUST be treated when one partner tests positive. If you get Chlamydia and get treated, but your partner does not, and you keep having sex (particularly unprotected), you can wind up passing the infection back and forth again and again, something which happens frequently in partnerships where everyone isn't getting tested or partners are still going without condoms even after a recent Chlamydia infection. It's really important to abstain from any unprotected sex until all partners are completely finished with treatment, and found, via a new test afterward, to be clear of the infection.

Is it curable? Yes, but you can get it again.

Can it cause death? Not in and of itself.