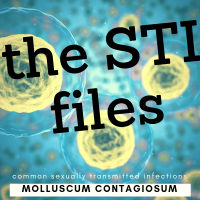 Stat: Molluscum contagiosum isn't technically an STI, but it can be transmitted through sexual contact. The CDC states that molluscum cases in the United States have been on the rise since 1996.

What is it exactly? It's a contagious skin infection caused by a poxvirus called the molluscum contagiosum virus (MCV). There are four types of MCV: MCV-1 to -4. MCV-2 is the type most commonly occurring in adults that is most often sexually transmitted.

While it can be sexually transmitted, and often is, molluscum is most typical in children under the age of 10. The virus affects the outer layer of skin and does not circulate throughout the body in healthy people.

What are its symptoms? Small, round, raised flesh-colored bumps on the skin that usually have a little dimple in the middle. When molluscum is sexually transmitted, those bumps usually appear on the vulva or penis, the area around the anus, the lower abdomen, inner thighs and/or buttocks. For someone who contracts it from giving oral sex, they may appear on the face. The bumps might not feel like anything, but might also feel itchy or sore, especially if you rub them, scratch them or pick at them.

The incubation time from getting the infection to seeing bumps can be as long as six months, but is usually between two to seven weeks.

About how many people have it? Molluscum contagiosum, when sexually transmitted, is fairly uncommon. It accounts for less than 3% of STIs in the United States. It usually occurs in people 20 to 40 years old.

The papules themselves tend to spread more on one person's body if they're picked at, squeezed or scratched, and shaving the area can also cause them to spread.

How is it diagnosed? Through a visual exam from a healthcare professional, which can then be confirmed by a biopsy (skin sample) of one of the bumps.

Is it treatable? There's an array of opinion about if molluscum needs to be treated. Molluscum usually disappears within 6 to 12 months without treatment and without leaving scars, though some growths may remain for up to 4 years (and can therefore still be spread to others). Often, healthcare providers will not suggest treatment, but suggest just letting the virus run its course, much like is usually done with a cold virus or chickenpox.

Some healthcare providers will advise treatment, either for cosmetic reasons, or to help keep the papules from spreading to more areas. Those treatments may be topical treatments (like peroxide, astringents, tea tree oil or other topical agents), cryotherapy ("freezing" cells/bumps with a pressurized liquid spray, like liquid nitrogen), laser or other treatments. What treatment is used will tend to depend on the preference of a given provider and/or where the bumps are and how many of them there are.

If you do shave areas where molluscum appears, it's best to stop while you have molluscum, since shaving tends to spread the papules further. You also will want to avoid picking at or itching the bumps.

Is it curable? Usually someone with it is "cured" over time just by letting the virus run its course. Treatment does not actually "cure" the illness, though unlike Herpes or HPV, once the bumps/papules are gone, the virus is, too. However, someone who has had it can get it again.

How can we protect against it? Like with other STIs, use of barriers (like condoms) for genital sex can help. But as with STIs like Herpes and HPV that are transmitted from skin-to-skin, rather than through fluids, condoms don't protect as well against molluscum as they do against infections like HIV or Chlamydia. Still, we can expect a similar level of protection (usually estimated at around 70%) from barriers that can be provided with HPV and herpes for molluscum.

Additionally, being good about frequent handwashing, avoiding direct contact with skin lesions when they are present, limiting the number of sexual partners, avoiding sex with a partner who has very recently shaved their pubic area, and using anti-fungal soap after sexual contact with a new partner can also help. When sleeping at someone's house overnight, ask for or bring your own towels, washcloths and/or bedding.