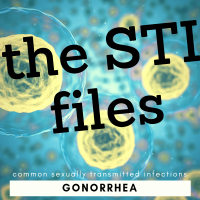 Stat: In the United States, approximately 75% of all reported gonorrhea is found in people age 15 to 29. It affects people with vulvas more often than people with penises.

What is it exactly? Gonorrhea ("gone-or-ee-ah"), also known as "the clap," is a bacterial infection caused by Neisseria gonorrhoeae.

What are its symptoms? If a person has symptoms, they usually appear in the first week after exposure to gonorrhea, but it may take as long as a month to get symptoms, and many people do not develop any symptoms at all. Someone with a vagina may have a painful or burning feeling when they urinate, a yellow vaginal discharge, or a bloody vaginal discharge. Over time, they may get abdominal pain and pelvic inflammatory disease (PID). PID can lead to fever, infertility, miscarriage, and bladder inflammation.

Most people with penises who are infected with gonorrhea will have signs like a burning sensation when they urinate, a yellow, greenish or white discharge from the penis, or painful and swollen testicles. Over time, untreated gonorrhea can lead to infertility, inflammation of the epididymis, inflammation of the prostate, and narrowing of the urethra which makes it difficult to urinate.

If a person gets a gonorrheal infection in their throat, they usually don't have any symptoms.

How is it diagnosed? By the microscopic examination of urethral or vaginal discharges and possibly cultures taken from the throat or rectum as well. Sometimes a urine sample is used to diagnose the infection.

Is it treatable? Yes. Your doctor can give you one of many antibiotics to treat gonorrhea, although there are drug-resistant strains of the bacteria which are becoming more common and may require treatment with more than one course of antibiotics.

Is it curable? Yes, but you can get it again. If you are treated, all your sex partners should also be treated to make sure you are not re-infected from them.

Can it affect fertility? Yes. It can make people sterile.

Can it cause death? Yes, gonorrhea can spread to the blood and cause problems all over a person's body. This can happen in 1% of people who get infected. Also, it is easier for HIV, the virus that causes AIDS, to infect people with gonorrhea.

People who have gonorrhea might also get Pelvic Inflammatory Disease (PID), which increases their chances of having a life-threatening ectopic pregnancy.

How can we protect against it? If you do not have sexual contact with other people, your risk of getting gonorrhea is almost zero. If you are having sexual contact, it is best to practice safer sex and limit your number of partners. Having safer sex can means using latex barriers like condoms, dental dams, and gloves correctly and consistently. It is also important to get regularly tested for STIs with your partners because early treatment of gonorrhea is a good way to avoid serious complications. Two people who know that they are not infected and who have sex only with each other cannot contract gonorrhea.