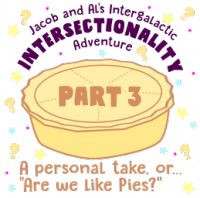 In Part 1 and Part 2 of our intersectionality series we spoke about how identity and the way it intersects is personal.

Jacob: So lets get started! How do you introduce yourself, Al? Do you think you could describe yourself like a pie, with a slice for each of your different identities?

Jacob: I say “I'm Jacob! I’m a half-Armenian, queer-ish person who looks like a boy who is 27 and lives in the UK, and is a youth worker.”

Al: But, these don't neatly encompass our own unique identities and life experiences!

Jacob:...or how we change over time! There seem to be moments in time when those things intersect in unexpected ways and give us a glimpse of how it all works. Are there moments that stand out for you?

Al: I live in California - a state where a lot of Chicanx and Latinx people live. Since I have brown skin and grew up in a mostly white area, a lot of people assume that I speak Spanish because I grew up speaking it with my family. But my mother is from Guyana, a country in South America that doesn’t speak Spanish at all- I just happened to be in a bilingual program at school. So while being bilingual and speaking Spanish is part of my life experience, I don’t share the cultural heritage that a lot of people have who were brought up speaking Spanish as a native tongue.

Jacob: I have been misidentified too! I think we’ve both had people ask “But where are you really from?” ...My parents called me Jacob because they thought Hakop sounded too foreign. But then kids at school made anti-Semitic jokes because the name sounded Jewish! Anti-semitism for being a Jacob! Al: We haven’t even begun to talk about the ways in which our identities and the ways we’re perceived by others intersect. And how that makes us feel about ourselves, which in turn affects how we identify ourselves. Whoo boy.

Jacob: Very true! A few years ago, it was difficult for me to identify as a survivor of sexual assault, because many people perceive me as masculine and unable to be assaulted. My thoughts about it were a hindrance to my recovery, because I couldn’t see that I was hurt or could be hurt in this way. Masculinity itself is a real block for many survivors too. Even though in many other contexts it isn’t.

But again this is another moment where the different things affecting me intersected in an unexpected way. There is something more to it, and your relationship pain, survivor status, your experiences and identities are always valid.

Jacob: This makes me realize that if we had to draw a pie-chart of our identities mine would need at least three charts layered on top of eachother. How I feel, How I’m seen and How I think I’m seen. We’ve just tripled it! Al: Phew, that’s a lot! That is also a good example of how our identities are fluid and change based on our experiences; they can even change from day to day (and hour to hour! and minute to minute!). I wake up some days feeling more dykey or more genderqueer than others. And that’s okay.

Jacob: So our ‘pies’ are now multi-layered, they are constantly transforming, and we have stuffed them with extra slices! At this point I think that metaphor fails, our pie charts have pretty much exploded and crumbled! Al: By golly I think you're right. Shall we try some other metaphors? Al: I like to think of my collective identity like a big sloppy me-sandwich that I make every morning when I get up.

There’s always bread and avocado and tomatoes and potato chips - those are the core ingredients - but sometimes it’s made with gluten free bread, and there are also toasted sesame seeds depending on who I’m talking to, and the mustard drips out of the sides sometimes onto the other people (or sandwiches) that spend time with me. And sometimes the bread gets a little soggy, and sometimes there’s a pickle on the side,

but it’s unique and it’s me and it represents who I am at any given moment.

Jacob: I love this Al! Especially as it's something you make for yourself! It's also really about what feels good or tastes good. You bring emotion into it. Mine is a little different…

The combination of words I use to describe myself are a bit like a ramshackle lodge on a deserted island. Every component, including windows, doors, and roof, is salvaged from my surroundings. They represent the words I use or could choose to describe myself.

‘Half-Armenian’ isn’t really a definition of my ethnic and cultural influences, it’s a stand-in. It’s a piece of driftwood hammered against a wall to make a coat-hook.

My little shack doesn’t have walls which stick together properly, it has gaps and leaks and it has piece of an abandoned airplane wing for a roof which has it’s own history, like words do, and may have some unexpected consequences, but for me it does the job. It’s my house, even if it’s temporary.

Our metaphors are so different Al! I guess, even they are unique, just like us!

That also concludes all three parts of our Intersectionality series. Thank you for reading. Remember: mistakes are awesome, today’s sandwich is different from tomorrow’s, leave space for growth, stand up for justice and listen, listen, listen. Further Reading from Scarleteen: On activism, identity, community, relationships and other intersections