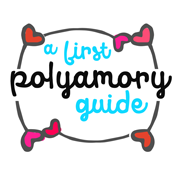 Polyamory, sometimes called non-monogamy or open relationships, is a big subject with a lot to talk about, so we'll start at the beginning: with a definition.

This is part of our series on polyamory! For more, check out:

I Think I'm Poly: How Do I Initiate Open Relationships?

You’ll see it defined a lot of ways, but here’s one we like:

Being interested in or pursuing intimate relationships (emotional and/or sexual) with more than one person at the same time, in a consensual, open, informed setting.

Have you ever been super into two people at once, and told you need to pick one? Well, if and when you don't want to, maybe you don't.

For the purpose of this article, we're using the term "polyamory" (often shortened to "poly") broadly, but many people feel more comfortable with different terms for this umbrella concept, which is a-okay — use what feels right to you.

What’s the difference between polyamory and cheating? Well, a lot of things, starting with the fact that everyone involved is exercising informed consent. No one is breaking agreeents, lying or sneaking around.

Some helpful definitions:
Compersion: A feeling of excitement and happiness you can get when seeing a partner is happy with one of their other partners.
Metamour: Someone who is in a romantic/sexual relationship with your partner, but not with you.
Polycule: A delightful term for the extended web or network of people connected through various polyamorous relationships, when they aren't a closed, easy-to-visualize system. Plotting them out on paper can look a bit like the structure of a molecule, hence the name. Often when people talk about "their" polycule they're including not just their partners, but metamours as well.
New Relationship Energy: Often abbreviated NRE, this is the giddy, floaty, can't-stop-thinking-about-them period many people experience in a brand new relationship.

There are several different ways people structure non-monogamous relationships; we've shown a few in the sidebar right here. Not everyone's relationships will always fit easily into one of these structures, and it's often the case that what someone thinks they want looks a bit different from what turns out to work best for them and for their other partners. Some start romantic or sexual relationships with an automatic assumption of exclusivity and some don't; if it isn't something you discuss with a partner or potential partner up front, you may be surprised down the road to find that the expectations you and your partner had were quite different.

And it is important to have that conversation! Unless you and a partner have discussed and agreed on an exclusive/monogamous relationship, it's not safe to assume that you have one by default.

Some common structures of poly relationships:
V: One person in a relationship with two other people, neither of whom are directly dating each other. This can take other forms like an N, for example; the letter maps out the relationship shape
Polyfidelitous triad: Three people who date each other exclusively
Quad: Four people who date each other (often originating as two separate couples, but not always!)
Group polyamory: Any number of people larger than four who date each other exclusively within the group
Open marriage or relationship: A couple that (usually) independently dates other people
Solo polyamory: Someone who dates multiple people but specifically chooses not to seek a main/primary relationship or a level of big commitment (such as living together or sharing finances) with any partners
Hierarchical polyamory: Characterized by a “primary” or “anchor” relationship with a close level of personal and possibly financial entanglement (living together, for example), and “secondary” partners beyond that relationship. A "secondary" partner isn't necessarily less important, but may be a smaller part of someone's daily life.

What we cover in this series of articles is the type of non-monogamous relationships you and your partner(s) craft once you've thought about and discussed your options enough to have a sense of what feels best for you. The difference between the default state of a new relationship where no one's established the relationship structure and an explicitly polyamorous one is the thought and intention that's been put into it.

If you’re here, you’re probably wondering if polyamory is for you, or perhaps someone has asked you to either enter a polyamorous relationship or open up a previously-monogamous one. Maybe you're just curious about how this all works.

You might be wondering: what is it about polyamory or open relationships that attracts people?

If you're considering polyamory for yourself, it’s okay to be hesitant, scared, or unsure — it can be a big change in the way you live your life and relate to people. If part of you is going, “Yesyesyesyes this is meeeeeeee!” then yay for you! But if you’re more in the “Hmm, this is new and I don’t know how I feel about it” camp, that’s okay as well. You should always feel safe and comfortable in your relationships, and jumping into polyamory while still not being 100% on board can be bad for everyone. It’s okay to take your time, think about whether you’re ready to explore, and set some clear boundaries and expectations from the start. There are plenty of stops along the way from "no other partners" to "anything goes."

But also? If you know that open relationships just aren't for you at all, it's okay, and it's certainly okay to make that clear to a partner. Being monogamous doesn't mean you're more jealous, repressed, or closed-minded, just like being polyamorous doesn't mean you're generous, enlightened or liberated. As with so many other aspects of sex and dating, there's no one-size-fits-all when it comes to agreements about monogamy and relationship structures; it's not better or worse to prefer one over the other.

And hey, if you are poly and you know it? First, clap your hands: But then, if you’re currently in a monogamous relationship, it’s important to sit down and talk with your partner so they understand that you might not be healthy and happy in a closed relationship. Make sure they know it’s you, not them — but don’t try to force yourself to be someone you’re not.

But what about jealousy?

When talking about poly relationships, the conversation always seems to make its way to -- or start and ever stay on! -- the subject of jealousy. Many people view jealousy as a natural consequence of non-monogamy, and therefore as a natural barrier to exploring open relationships, while others will say they can easily have multiple partners with no hint of jealousy at all. While everyone experiences jealousy differently, it's something that most people will face at some point, so it makes sense to look at it head-on and assemble some tools and strategies for tackling it, instead of ignoring or denying it.

If anyone ever tells you, "Real poly people don't feel jealousy!" then congratulations, you've now learned they're someone whose opinions you can safely ignore.

Yes indeed, people who practice polyamory can and do get jealous sometimes; we're only human, after all. Jealousy itself isn't a sign that there's something wrong with whoever's feeling it, or that they aren't cut out for polyamory. Jealousy is just an emotion, and like all emotions there are more productive and less productive ways to handle it.

When you notice you're feeling jealous, don't panic! It's probably a good idea to talk to your partner(s) at some point, but before you do that, take some time to reflect on your feelings and see if you can figure out where they're coming from; that might help you address them more easily.

For example: feeling left out because a partner is doing something fun with a new datefriend? See if you can plan to do your own special activity with them sometime soon so you can feel cared for and know they're excited about you too. Do you worry that a new metamour is going to outshine you, or does the spark of a partner's new relationship excitement feel a lot stronger than your connection with them is now? Take some time to reconnect with your partner and talk about what you each find special and compelling about each other. Are you jealous of a partner having an easier time finding other people to date than you're having? You might need to refocus your personal life to make sure you're not solely focusing on dating relationships: reconnect with friends, find some new activities, or dig into some personal projects.

A common mistake made by people who are feeling a lot of jealousy in a poly context is to try and combat that jealousy by establishing more rules for the relationship. It can feel like saying "only spend the night with me" or "don't have X kind of sex with anyone else" is a way of protecting part of your relationship or keeping it special, but it's likely to make a partner feel stifled and isn't doing anything to address the underlying feelings of jealousy or insecurity. Instead, take some time to explore your feelings of jealousy. Of course it's ok to have limits and boundaries in an open relationship, but if jealousy or discomfort are driving those boundaries, it can be more productive to address the feelings in question than to pile on more restrictions.

That having been said, if you find that you're feeling upset and jealous any time someone you're dating is spending time with or paying attention to another partner, and communicating with them about it isn't helping any, that may be a sign that open relationships aren't the best fit for you right now, or that there are other issues to be resolved in your relationships before polyamory feels like a good fit.

Keep in mind, too, that just like you don't have to have any sexual experience with people of a certain gender to know you're attracted to them, you don't have to have multiple relationships right this second to identify as a polyamorous person and have a sense of how you might like to explore that in the future. Acknowledging your desire to explore polyamory can be positive and self-affirming, even if you aren't in a position to act on it at a particular time. As for investigating just how you might want to structure or explore polyamorous relationships, that's something we'll cover in the next part of this series.