It’s All Right: There Is No One Right Time to Start Dating 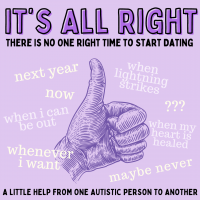 Life seems like it’s divided up into supposedly easy chunks with specific and inflexible timelines. You go to elementary school, middle school, high school, and college, and then, at least in my neck of the woods in Texas, it’s apparently time for marriage and kids. These feel culturally expected to occur by the time you’re 25 (or even younger!) and deviating from those norms may not instantly make you a social pariah, but it can make one wonder if they’re doing something wrong.

You may know, like I know, that there isn’t a single mold that all human beings should adhere to in terms of being “proper adults.” (And that measuring adulthood by sex, romance or making babies isn’t a great idea in the first place.) You may also know, like I know, that even with this knowledge, it doesn’t always feel that way when you’re scrolling through your social media feed and seeing what seems like everyone your age settling down and having kids except you.

Many social norms, macro or micro, can make it seem like the ideal — or even only! — time to start having dating experiences is in high school. You may get the message that doing it any other time, even just waiting until you’re in college, puts you at  some kind of disadvantage. To go against that grain may inspire some social judgement of you and, at least in my case, leave you wondering if you’re just fulfilling a harmful stereotype about what autistic people are capable and incapable of doing. Ugh, the weight of those potential consequences just from not dating people when you’re in 10th grade!

Of course, negative perceptions of people who wait to date by that basis alone are simply untrue. Even if it’s impossible to remember amidst the din of outside messaging world, there is no one right time for dating. That’s as true for neurodivergent folks, including those of us on the autism spectrum, as it is for neurotypical members of the world.

Why is it so difficult to remember that?

I can write this piece, nod my head at what I’ve typed out, and then open up my phone only to still wallow in a sense of anxiety over what I haven’t accomplished on the dating scene compared to my friends. Why is this norm so hard to combat? I think part of the problem is how deeply entrenched traditions related to dating can be. No matter where you are in the world, human beings love traditions. The world and our lives in it can be and feel so uncertain: it can be extremely cozy to have some reliable fixtures of reality. This is utterly harmless when it comes to, say, pumpkin spice season. It’s way less harmless when it strongly broadcasts a universal uniformity when it comes to dating and other aspects of human relationships and sexuality.

This concept of kicking off your dating life in high school can be an especially overwhelming one if you’re autistic, occupying any other space in the neurodivergent population, or otherwise socially anxious. Most societies around the world aren’t made with autistic people in mind and that means a lot of conceptions of a “proper” schedule for dating also isn’t made for proper flexibility to account for autistic people and experiences. There isn’t one template for what things autistic people struggle with, but many members of this community (including the writer of this piece) have often struggled with socializing. The daunting nature of these hurdles means, if you’re like me, you may be more hesitant to start dating people in High School or even college, even when dating is something you’re very interested in.

While the expectations of other people, and those based on other people, may elicit FOMO for you (or me), making your decisions based on those expectations, rather than what feels right for you, isn’t wise or somehow more adult. Taking care of yourself and being conscious of what you can and cannot do or handle is a much better indicator of maturity than trying to rush into something just because everyone else is already doing it. Rushing into dating when you know you’re not ready is much like skydiving without proper training or instructions, it’s just not going to work out well for any of the parties involved. Having the knowledge and capacity to act properly or thoughtfully during a date Exhibiting patience is much more important than adhering to a supposed timetable. If you’re an autistic teenager who’s at a point where you’re comfortable enough socially to start dating, okay!  If you’re in that age range or any other part of your life and you don’t feel like that’s something that you’re capable of yet, that’s equally valid.

It's also worth remembering that it's not even unusual to be uncomfortable dating or even being single. If you're feeling lonely or like nobody else in your age range is in the same spot, check out some fascinating data compiled by the Pew Research Center in August 2020. Of those polled, a whopping 41% of those within the ages of 18-29 are single, and 23% of those in the 30-49 range are. For queer readers out there who feel insecure about their romantic life? 47% of those polled here who identified as queer are single.

These numbers aren’t just here to randomly inject mathematics. They’re here to help reassure and remind you that it’s not strange or exceptional to not be dating or to be single: it’s common. There are plenty of other aspects of existence that can and might occupy your time and attention. For instance, this data notes that many of those polled who were single said they were either focusing on other matters in life (like a job) or were comfortable being single as reasons for not having a partner. Social media algorithms and societal pressures can make you feel like you have to start dating at one specific time in life but looking at even a little scientific data makes it apparent that’s a load of poppycock.

Plus, if and when you want to and you feel comfortable leaping into the exciting pool of dating, there are plenty of tools at your disposal now that can potentially make it less daunting. The 2020s are a golden age for dating apps, including some even specifically geared toward queer people. The isolated nature of the COVID-19 pandemic means more and more people have turned to using these tools than ever, which has helped to further normalize this already common way of dating digitally. Plus, ever-increasing visibility for neurodivergent people means there are outlets online for dating for neurodivergent people if you only feel comfortable dating other people with your own neurodivergent needs. Events hosted by and for people who are neurodivergent, or even spaces online designed to help neurodivergent people meet, can be helpful reminders that you’re far from alone on the dating scene.

Perhaps most useful of all to remember is something I wish I had been told when I was younger: friends can be and often are just as important as any romantic partner. Friendships are also intimate relationships, and are no less important or impactful as romantic or sexual relationships.

Throughout my high school experience, I was desperate for romantic affection, to the point of feeling utterly embarrassed about my transparency. I left some of that behind in the process of growing up and going to college, but the insecurities of not being in a romantic relationship with someone can still plague me.

However, in the last few years, I’ve realized that my friends fulfill so many of the functions that I’d wanted from a romantic partner then, like somebody to talk to at random hours of the day or to bond over shared interests. Best of all, I can be there for other people in an emotionally fulfilling way whether I’m in something romantic or not.

Just as our cultures often creates unspoken norms for when we’re supposed to date, so too do they often have a frivolous attitude toward friends and friendships. They’re often presented as disposable social connections compared to a one monogamous partner you’re supposed to share a lifetime of affection with. In reality, friends are such an important part of life. They demonstrate that emotional fulfillment with another human being doesn’t only happen in romantic or sexual relationships or interactions. There are other ways to connect with others and get the kind of emotional attachments we all need. In other words, there’s even less incentive to rush into dating if you recognize that’s not the only way you can experience important connections with other people in your life. Certain friendships may even eventually blossom into romantic dynamics, which can be beautiful, though friendships remaining strictly platonic are their own kind of wonderful. Plus, friendships aren’t just limited to friends you see movies with. They’re also a core part of any more intimate relationship, whether it’s long-term romantic or just a dynamic between casual sexual partners. There’s a sense of trust and understanding in healthy friendships that’s essential for these specific circumstances. Friendship is everywhere in the world of social interactions and that makes it critical to understand how emotionally fulfilling they can be.

Of course, saying all this isn’t enough to ward away all the insecurities of being single if so many people around you are, or appear to be, in happy romantic or sexual relationships. That’s okay. It’s just as normal to express those insecurities as it is to be on your own timetable when it comes to dating. You should prioritize when you feel comfortable and ready, not what everybody else is doing or what’s considered “normal.” Even though it’s something that can be easy to forget about for a multitude of reasons, there is no timetable for dating.