A few weeks ago, I had the chance to attend an inaugural sex education policy convening in Washington, D.C. , sponsored by the Sexuality Information and Education Counsel of the United States (SIECUS), with a host of other amazing sex educators and advocates. 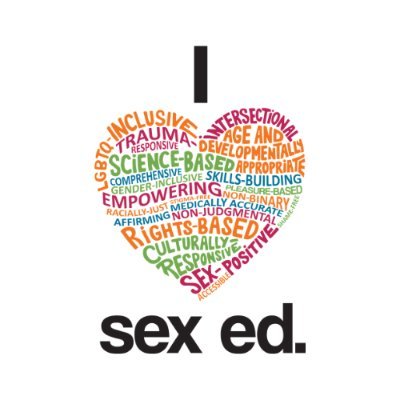 One of the reasons we all came to D.C. was to do a day of advocacy for sex education on capitol hill. Specifically, we were talking to representatives and asking them to co-sponsor two bills: The Real Education for Healthy Youth Act (REHYA) and The Youth Access to Sexual Health Services Act (YASHS).

What do those bills do, and why were we advocating for them?

Bills like REHYA have been introduced before, but never passed. Instead administrations, including the current one, continue pouring a bunch of money into abstinence programming (or “sexual risk avoidance” programs, which are just abstinence-only programs with a longer, sneakier name). You know, those programs that have been shown time and again to be ineffective and often actively harmful? REHYA would not only direct money towards medically accurate, comprehensive sex education, it would also put measures in place to prevent any more funds from being wasted on abstinence-only programs.

YASHA’s goal is to break down barriers that prevent already marginalized young people — like young people of color, immigrant youth, LGBTQ youth, youth in foster care, homeless youth, and young people in juvenile detention — from accessing sexual and reproductive health care they need. It’s a logical companion to REHYA, because even for people who get comprehensive sex education, if their access to sexual health services is limited — or doesn’t exist, period — that information can only do so much for them. Knowing you need to get an STI screening can’t do you much good if you lack the resources, be they transportation, money, safe and supportive adults, or basic control over your daily life, to access that screening.

We see the difference inclusive, accurate sex education makes every day with our users first-hand, and the hurdles many of them still face when it comes to accessing basic sexual healthcare. We’ve watched with frustration as funding pools for comprehensive sex education have remained small, while abstinence-only programming stays flooded with cash. These policies would be an immense breath of fresh air, and would also signal a long-overdue change in how sex education has usually been approached in the U.S.

On a more personal level, I live in a rural area in a state whose sex education policies are inconsistent at best and barely-there at worst. Even Reno, the nearest big city, faced several months of delays when developing their new sex education curriculum for high schoolers, as there was resistance to the inclusion of a lesson about gender identity and sexual orientation. In order for the lesson to be included it was given a preamble that, while it states that the lesson is taught from an inclusive perspective, makes it seem as though the existence of queer and trans people is a matter of opinion and not, you know, the lived experience of people who may very well be existing right there in the classroom where the preamble is being read.

RHEYA would prevent situations like what happened in Reno. If funds are put towards inclusive, accurate programming, youth in locations that would otherwise have crummy, harmful, and exclusive sex education will actually stand a chance of getting the inclusive information they need without things like caveats to appease the close-minded.

Does that all sound like something you’d like to see? We sure would. If you live in the U.S, you can fill out this form, courtesy of SIECUS, and let your representatives know that you support comprehensive sex education, access to sexual and reproductive healthcare and these proposed policies.