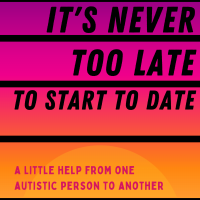 Often in my life, I’ve felt like I was being left behind.

Being autistic, some things just haven’t come as naturally for me as they seem to for other people. Unfortunately, these have included hallmarks of American life often used to symbolize being “an adult” like driving on my own or getting my first paid job. Stuff that many people here do in their teens took me until my early-20s to finally accomplish. Looking at social media posts from other people my age, I’ve frequently experienced bursts of insecurity over what I have and haven’t done.

Am I a “proper” adult if I haven’t done certain things by a certain age? Can I consider myself “successful” if I haven’t accomplished specific tasks? Often, I’ve found myself  full of anxiety over this thought process, and that’s absolutely included dating. Though you may think me a Casanova because I write a dating column on this site, I haven’t had a lifetime’s worth of experience on the dating scene. This was especially true in high school, where my experiences with dating were minimal.

As I became an upperclassman and saw people my age getting more and more serious with their romantic relationships, I found myself struggling to even talk to other people, let alone go out on dates with them. Here again, was that “left behind” sensation as I became paranoid about being seen as “wasting” my high school years if I wasn’t as active on the dating scene as my peers. This came about as a combination of multiple factors, including the workload of college, pursuits in my writing career, and plain old nervousness over going on or even just asking people out on dates.

Even with a whole bunch of responsibilities to juggle, newer manifestations of that thought process from High School have emerged in the last few years of my life. No longer do these thoughts come about just as a response to seeing people date. Now social media posts reveal that people my age getting married, or even having kids. How is that possible? The dating scene still scares the heck out of me, and now some of my contemporaries are starting families? Heck, my parents got married and had me when they weren’t but a few years older than me.

Am I as “mature” as typical mid-twenty-somethings? Am I as “mature” as my parents? Will I always feel like I’m lagging behind everyone else in terms of “maturity?” These questions can become so overwhelming to process in the most severely debilitating moments of my life. Falling into that mental rabbit hole can make me feel hopeless but, on my best days, I’m conscious that the world is a lot more complicated. Human beings are not on a strict timetable to do all the same things at the same time. This is just as true of dating like anything else. Just because you (or I) haven’t been actively dating when a lot of other people in your life have doesn’t make you (or me) a failure. You’re just on your own timetable. So am I.

It’s never too late to start dating, you just have to do it when you’re comfortable. Once you do feel ready, or ready enough, it can be overwhelming to figure out where to start with dating. However, fret not, there are resources available for where to meet people! For one thing, online dating apps, though not perfect, can be a great way to dip your toe into this territory for the first time. Maybe directly plunging into face-to-face interactions can be too much to do initially but interacting with others through an app, could be more manageable.

If you’re looking to engage in more traditional forms of face-to-face dating, there’s also plenty of options in that field. While many areas (such as any place where a person is working) are terrible choices for engaging in these kinds of social interactions, there are more organic places for these types of exchanges. Many local communities have organizations dedicated to specific interests, like sports, films, art, or even groups for single people. You can find these on sites like MeetUp.com.

Seeking out one of these groups can be a great way to discover other people with similar interests as yourself who you might be able to go on a date with. For college-aged autistic people, on-campus clubs can serve a similar purpose. Even if you don’t manage to ask somebody out in these environments, they can still provide a good place to sharpen one’s social skills, a crucial element when going on a date with anyone.

If you’re able to manage to go into them, bars or coffeehouses can also be good places to connect with other people and get to know them. If your autistic traits are like mine and a bar is too noisy, that’s not the only place to go for dating activities. A more subdued coffee shop can be a great backdrop for taking someone on a first date.  There’s a whole variety of places that can fit your specific needs as somebody whose autistic while making sure you can play an active role on the dating scene.

When going to these places, it’s important to remember that you don’t have to be perfect to go on a date. Now, that’s not an excuse to ignore basic rules of etiquette, but if you’re like me, it can be easy to get wrapped up in your head over doing every single little thing perfectly. Try to get your brain to focus on the here and now. Dating isn’t something reserved people atop a pedestal, it’s a common activity that everybody does. Keep that in mind to curb any disruptive anxiety.

If you’re finding it difficult to even muster up the energy to engage in introducing yourself, that’s okay! That’s a totally normal part of this process. Just remember that the basics of conversation are called the basics for a reason: they’re simple to execute despite seeming so overwhelming. When you’re trying to introduce yourself to someone, remember not to barge into the other person’s conversations. Absorb what they’re saying to get to know them better, and wait for an opening in their conversation to say hello, introduce yourself, contribute something to the discussion, or any assortment of ways of gently establishing your presence.

It's also worth saying that you shouldn’t get discouraged if things don’t go right or if your interactions with people on dates are messy. Social interactions are complicated. That’s true under the most throwaway circumstances, it’s doubly true when trying to talk to people under the pretense of a date. If it goes badly, just remember that that’s an organic part of the social experience. It shouldn’t be seen as a sign that you should return to not being active on the dating scene. On the contrary, having difficulties this environment should be worn as a badge of honor, the ultimate sign that you’ve truly entered the dating scene!

Plus, you’d be surprised, when getting to know others, how you’re not alone in feeling like life is passing you by. Speaking from experience, it’s disturbingly easy to get trapped in your own mind over perceived shortcomings. When you’re in this mindset, you simply think you’re the only one who has ever felt like this, another sign you’re doomed to be alone. But you’re not. Everyone’s got something that they feel like they’re not as advanced on as they should be. Maybe it isn’t dating, but these insecurities persist in everyone.

Keeping that in mind doesn’t just make the dating scene feel more manageable, it’s also a good reminder that you’re never “too late” to engage in parts of life. Though grappling with those feelings can make you feel alone, you’re not the only one going through these experiences. Others are also on their own unique timetable, including timetables similar, and maybe even identical, to your own. Rather than the world being full of people far advanced than you, the world has its fair share of people who are also working at their own pace. Keeping that in mind, there’s no reason to rush. Be patient, work on your own timetable. The resources for getting into the dating scene are out there and they’ll still be out there when you decide to take that exciting plunge.