Can You Be Yourself On Dates? 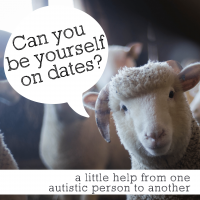 If you’re like me, there are lots of questions that race through your mind when you prepare to go out on a date. Do I look polished enough? Am I going to click with this person? Did we pick the right venue to go out to? And then there’s the one question always gnawing at the back of my skull about my autism: can I be myself? If I’m my full unfiltered self, bursting with joy over special interests and not being self-conscious over every move or word I utter, will I alienate this person instead of giving them a fun date?

The lack of mainstream representation of autistic people in happy and fulfilling romantic relationships only exacerbates this concern. Is this lack of representation a result of autistic people being unable to maintain steady relationships? Is being ourselves just an easy route to maintaining loneliness? Even though you know it’s really ableism and other centering of neurotypical people, such questions can feel so pressing, and play so heavily on my lifelong insecurities tied to my autism, that they just make me want to scoot back home and crawl under my cozy covers rather than deal with the uncertainty of going on a date.

Of course, it’s totally possible to be yourself out on a date, though it’s easy to see why autistic people, like myself, would feel insecure about this prospect given how often society asks us to mask our true selves.

The concept of masking is about autistic people “concealing” — and being pressured to conceal — behavioral traits that are associated with autism. Fidgeting, for example, would be one trait that’s stifled, ditto talking about subjects that would fall under our special interests. The goal of masking is to make yourself less conspicuously autistic to neurotypical people. If you go about this process correctly, you’re sadly bound to be rewarded by people eventually saying, in hushed tones, “Wow! You don’t even look autistic!”

Autistic people struggle with masking — particularly the expectation of masking — every day in social situations. In addition to juggling paying attention and properly responding to the person you’re engaged with, you also have to wonder how much your behavior signals to the world that you are, in fact, an autistic individual. Are you making a “scene?” Are you too obvious? To be overtly autistic, even in non-harmful ways, upsets conventional society’s image of what it means to be “proper,” because that’s based on NOT being autistic.  Concerns about that and other issues related to masking can prove so all-consuming that it’s understandable to then graduate to contemplating whether or not you also need to “mask” your core identity when out on a date.

Now, of course, it’s not just possible but also feasible to be yourself while out on a date, including if you’re autistic.

Relationships for anyone, not just ones that involve an autistic individual, should be built on and with openness and authenticity. To conceal your true self is only creating a layer of duplicity that will endanger your connection in the long run. Society may tell us that “masking” is the best route to meeting people, but the basic structure of any solid intimate relationship says otherwise. It’s integral to just be yourself as an autistic individual in these settings.

That’s not to say there aren’t things to adjust or accommodate for when going out on a date. But these are basic good behavioral traits-the concepts of adhering to them, and also being yourself are not mutually exclusive. As an example, do you have to hide your special interests or other fascinations? As long as they aren’t uncomfortable to bring up in a first date context (like sexual proclivities), it’s totally fine to bring up your interests. Anything from geology to science to certain kinds of music and everything in between-don’t worry whether it’s “cool” or going to make you more appealing to reveal your passions. Revel in your excitement! Your date might, too!

Contrary to what general society believes, embracing your own interests won’t immediately create a barrier between yourself and another person. In these social situations, a good idea, when talking about your own interests, is to use this opportunity to eventually ask the other person what their fascinations are. Use expressing your passions as an opportunity to click with another human being over their unique interests. Excitement can be infectious — use that to create a bond with the person you’re with rather than just getting anxious over how much or how little you’re “masking”.

Be Your (Autistic) Self

There are endless possibilities regarding how you can use the discernibly “autistic” traits in your personality, the ones you’re supposed to “mask”, and utilize them to create a connection with another person. If you’re an autistic person who struggles with eye contact, for instance, that’s okay. Use that as an opportunity to strike up a conversation over décor elements of your date’s backdrop or other things that do fall into your line of vision.

Similarly, if you have trouble keeping still and are constantly fidgeting, be open about that, maybe even use it as a conversation starter. Asking the other person if they have any tics or other behaviors they do whenever they’re sitting down could be a way to get to know them while establishing cognizance of your own behavior. Even being open on your uncertainty over certain manners or standards in certain social situations can be an opportunity to ease the tension in your exchanges. Chances are the person you’re seeing is also nervous for their own reasons, vulnerability can be a great way to remind both parties that this is a date, not something that the fate of the world hinges on!

Through these and other tactics, you can be yourself and challenge the narrow definition of what society believes “proper” dating etiquette can be.

Though general social conventions tend to say that adhering to a rigid sense of social norms is the only way to accomplish that goal, simply engaging with the person (even in your own distinct way) is enough to let them know you’re listening and value their time. You don’t need to say every word right or make every gesture graceful, neurotypical people don’t even do that! Being there for another person is what matters, not exactly what form of behavior it manifests in.

The dating scene is overwhelming for anyone. But it’s especially daunting to autistic people who have to deal with the overt but unsaid demands of “masking” and concealing our personalities on a routine basis. When you have to grapple with those qualities as a part of your everyday routine, it becomes easy to believe that there isn’t a place for you on the dating scene. But that’s simply not true. There are ways to be yourself without alienating another human being. Keeping in mind the needs of the other person you’re on a date with is a primary objective of any date, but that doesn’t have to come at the expense of showcasing he wonderful unique personality that makes you you.

No healthy relationship is built on deceit. They’re built on people knowing each other down to their deepest roots. The same is true for relationships with autistic people, who deserve, just like anyone else, connections with others that encourage rather than stifle the concept of self-acceptance.