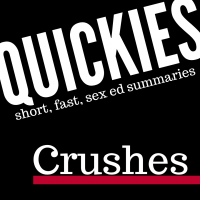 A crush is a word for a very strong attraction to or feeling about someone we're not already dating or in another kind of intimate relationship with. Crushes are often one-sided: we can be really interested in our crush, but they may not be interested in us in the same way. We can have crushes on all kinds of people in our lives: friends, people we see at school, celebrities, teachers, and even fictional characters.

Crushes often feel very intense, but the intensity of those feelings usually doesn't last for long. They can just stop after a while, or slowly fade away. Those feelings can also turn into something else, like deeper feelings of love if we actually get involved with the person we’re crushing on.

When someone has a crush, they can just have those feelings. They don't have to do anything about or with them, like ask someone out or get into a relationship with the person they have a crush on. Sometimes our crushes aren’t appropriate or safe to pursue. Sometimes we just don’t want to do anything about them. Usually, you can just wait a crush out and it goes away on its own. But if it feels right and you want to, it’s also okay to pursue a relationship, or a different kind of relationship than you already have, with your crush.

Crushes can feel really overwhelming. It can be easy to lose yourself in them. It also can be hard to know the right way to act around or with your crush. Here’s a list of some basic things to do — and not to do —when experiencing a crush.

Do: Chill out. When you get a crush, it's often a burst of very excited, intense feelings. It's easy to get carried away. But you don't want a crush to eat up the rest of your life, turn you into a person who only thinks or talks about their crush. Make sure you're still spending time on things like hobbies and friends. That kind of intensity can also feel like too much if you direct it at the person you have a crush on.  It can be hard, but try and relax some around them and keep the bigness of your feelings at a level they're comfortable with.

Don't: Give unwanted touches. When you have a crush on someone, you might want to be close to them. But we all have a right to our personal, physical space. For most people, that space starts at least an arms-length from our bodies. If someone gets too far into ourt space, it can make us feel nervous, scared or violated. If you're not sure your crush is comfortable being and wants to be touched in a certain way, or with you being in their space, ask them first.

Don't: Give inappropriate gifts. Giving your crush a big gift might seem like a way to get them to like you. But if your crush doesn't know about or share your feelings, this kind of gift can feel confusing and awkward. It can also make your crush wonder if you gave them the gift just to be nice, or if you are trying to get something, like a date, from them.

Don't: Do favors for your crush without them asking you to. A favor someone doesn't ask for can make them feel uncomfortable. Only do favors for your crush if they ask you for that favor. Just like with giving gifts, you shouldn't do anything to try and make someone feel like they owe you a date, a relationship, or anything else. We don't ever owe someone a kiss, a date, time, attention, or anything else just because they did something nice for us.

Don't: Demand all of their time and attention. It might seem like if you spend a lot of time around your crush, they will be more likely to like you back. Demanding all of their attention or always being around someone can make them feel smothered or unsafe. If someone feels like they can't get away from you, they're probably not going to want to see you at all. Being around your crush a lot doesn't mean they'll get a crush on you back. It's better to give people some space. If they want to be around you, they'll come to you and meet you in the middle.

Don't: Try to stop them from having other relationships. You might feel possessive of your crush, and worry there are people who will "steal" your crush from you. But people aren't objects: we can't steal each other. Your crush gets a choice about who they are in relationships with. It also isn't ever okay to try and control anyone else, including  through their relationships. The better way to treat someone we like is to respect their other relationships, not try to undermine them.

Do: Back off when asked. Respect a crush who asks or otherwise shows you they want you to back off or chill out. If you ignore a crush when they ask you not to do something, they're going to think you're creepy or unsafe because you're ignoring their bloundaries. Pay attention to their body language as much as you can. If they look upset, scared, angry or tense, if they move away from you, or stop talking to you, those are some signs they're uncomfortable and you need to give them more space. Respecting a crush's boundaries shows them that you see them as a person who deserves to feel safe and be listened to.

If you are reading this and are feeling bad because you think you've messed up with how you behaved around a crush in the past, it’s okay. Nobody is born knowing how to behave around a crush. Lots of people make mistakes when they are new to crushes. You know now how to do better your next time around.

For more information about crushes and related topics:

A few good outside resources on crushes are:

Teachers, caregivers, therapists, peer educators and other sex and relationships education providers: you're welcome to use the PDF handout version of this article for free, in any of the work you do, so long as it is provided to learners at no cost, you print it exactly as it is provided, and give attribution!