Autism, Romance And How We See Other People 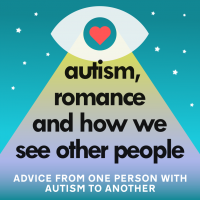 The notion of women being prizes for heterosexual men is still a widespread concept today, building upon conventional societal ideas about women being objects that have existed for centuries. (Remember when you could trade livestock for a potential bride?) This philosophy serves as a bedrock for groups like incels and other communities all across the internet. It’s such a widely circulated concept that Scarleteen has even published two pieces in the past debunking it.

Today I’m going to talk about a specific group of people that often succumbs to to this philosophy, whether consciously or unconsciously. Specifically, I’m talking about human beings with physical and/or mental disabilities who use their own personal challenges to justify feeling like the greater universe owes them the romantic attraction of a woman as a sort of consolation prize. As a person on the Autism spectrum, I know all too well that living with any sort of disability brings about a barrage of challenges. Your own difficult experiences living with those challenges are important and you have a right to feel all kinds of emotions about them, including frustration at the larger world.

However, just as your own humanity and emotions should not be discounted, the same goes for other human beings. Just because you face your own set of specific challenges doesn’t mean you get a free pass to discount the humanity of someone else. Everybody’s got their own challenges to face on a day-to-day basis. That’s a notion I myself had to learn the hard way.

Back when I was in High School, like most teenagers, I was struggling in a number of respects. One of these respects was connected to how I had a warped mindset related to romance, fueled by a self-pitying attitude tied into my Autism. I saw pictures of happy couples on social media and it made me want to scream out in jealous frustration. How did they do it? How did they manage to create, let alone sustain, a relationship? I was like a kid watching David Copperfield pulling off an elaborate magic trick, while struggling myself to pull a rabbit out of a hat. My own personal feelings of self-worth were negatively impacted by my inability to get a date for the Homecoming dance or any other big social function.

Instead of combating those feelings by learning to determine my self-worth through other means, I decided to fix my own emotional turmoil by approaching women in a manner that saw them as props to be won rather than as people. I’d get infatuated with the idea of dating a certain woman without ever considering what was going on in her life or, most importantly, what she might want. My primary motivation for this approach was the idea that the universe somehow “owed me” a date because I had Autism. This belief justified my entire mindset and led to a number of awkward encounters where I’d just randomly spring elaborate Valentine’s Day gifts or proposals for dates on lady classmates who were blindsided by this sudden turn of events.

Why wouldn’t they be blindsided? Such feelings or attractions came out of nowhere like the twist ending of an M. Night Shyamalan movie. Plus, these grand romantic gestures were usually done in awkward public settings that put so much stressful pressure on the woman I was doing these gestures for. My choice to do these gestures in grand public spaces conducive to a photo op, but not to making room to understand the woman’s personal feelings, is another example of how I saw women I had taken a mild interest in as just objects to be won. I was too busy planning extravagant gifts to bother with little things like “How might the woman I’m giving this to feel about this?”

Thankfully, that’s a part of my life I managed to outgrow once I left high school. Entering college, my worldview expanded immensely, partially due to forces in my control and others out of my hands. In terms of things I could control, I began to attend classes on feminist literature, philosophy and other courses that made me re-evaluate how I treated others and what was really important in the world. In terms of things beyond my control, well, my first year of college intersected with the start of Gamergate, a movement consisting of dudes viciously harassing women working in the video game industry as well as opposing the idea of diversity in video games in general. Sometimes it takes seeing the actions of others to realize what’s wrong inside yourself. Seeing the ugly entitlement that defined so much of the misogyny found in the participants of Gamergate echoed too much of my own high school mindset towards women.

It’s through these events that I was able to grow as a person and truly recognize the fact that women are not objects to be coveted but just people on this planet. The universe doesn’t owe me anything, particularly when it comes to the wretched idea of delivering female romantic companions like a UPS driver delivers packages. Part of growing up is realizing how misguided parts of our youth were. For me, the process of growing up has made me come to terms with the fact that women don’t owe you anything, no matter what physical or mental disability you have.

Plus, it’s worth noting how this mindset feeds into hurtful stereotypes of people on the Autism spectrum. The idea that people on the Autism spectrum can’t be accountable for their own behavior in regards to crossing boundaries with women or other people is an excuse often used by neurotypical people to excuse men’s bad behavior, while further stigmatizing Autistic people. I’m not saying that every single person on the Autism spectrum is in total control or knows exactly how to avoid every social faux pas in history. But most of us are capable of recognizing the humanity in other people and not treating them as objects. Using Autism as a source of martyrdom to justify how we treat women and other members of marginalized communities feeds into negative conceptions neurotypical people have for individuals on the Autism spectrum, and that’s just not good at all.

People on the Autism spectrum deserve better than being seen as inherently clueless and dangerous. We deserve to be seen as people in the eyes of general society. Everybody does. Autistic men should fight back against these stereotypes by doing something we should be doing anyway: taking the time to recognize women as people too. It can be painful to take the time to dig deep inside ourselves to recognize our own issues lie within. I can say that from experience. But it’s all worth it for learning how to recognize humanity both in yourself and in the human beings around you.

How Do I Tell a Date I'm Autistic?