My Corona: The Hymen & the Myths That Surround It 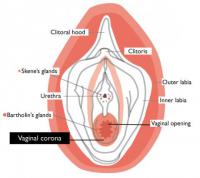 Often known by the established term “hymen,” the vaginal corona is the subject of many myths and misunderstandings. The most important of these is the notion that a person’s vaginal opening is covered by a membrane that ruptures with, or is "broken" by, vaginal sex. This is incorrect. There is no such membrane.

RFSU (the Swedish Association for Sexuality Education) wishes to dispel the myths and promote knowledge of the true facts. Our aim is to give you a more accurate idea of what you will find just inside the vaginal opening.

Where is the vaginal corona located and what does it look like?

The vaginal corona is located 1–2 centimeters just inside the vaginal opening, not deep inside the vagina. Every corona looks different – just like ear lobes, noses and labia – and differs in size, color and shape. It consists of thin folds of mucous tissue, which may be tightly or more loosely folded. It is slightly pink, almost transparent, but if it’s thicker it may look a little paler or whitish. It may resemble the petals of a rose or other flower, it may be carnation-shaped, or it may look like a jigsaw piece or a half-moon. In the vast majority of cases, it is elastic and stretchy.

Sometimes, albeit very rarely, the mucous tissue folds may cover the entire vaginal opening. In this case, you may need to see a gynecologist and have the vaginal corona opened to release menstrual blood and enable you to insert a tampon or have intercourse or other insertive sex. Giving birth through the vagina changes the vaginal corona appearance, smoothing or stretching it out and making it less visible. Nobody knows the vaginal corona’s real function, but it is probably a remnant of fetal development.

Does it hurt “the first time”?

For a person with a vagina to enjoy vaginal intercourse – regardless of how many times they have done it and what is being inserted in the vagina – they need to be aroused and lubricated (wet). If they're tense and have difficulties relaxing, it may hurt more. It doesn’t matter whether it’s the first, second or tenth time. It’s important to recognize the key role played by a person’s mind, whole body and clitoris in sexual arousal and enjoyment. The clitoral glans, for instance, contains thousands of sensory nerve endings – more than any other part of the human body. This sensitivity is the reason why so many people enjoy clitoral stimulation.

Do you bleed “the first time”?

The vast majority of people with vaginas don’t bleed. No matter what their vaginal corona looks like, fewer than half of all people with one bleed when they have intercourse for the first time. Of those who do bleed, few do because the corona was tight; instead, there are usually other reasons. If you were not sexually aroused, but rather tense, nervous and too dry, minor ruptures may develop in vaginal corona and may bleed. But this has nothing to do with how many times you’ve had sex.

Can the vaginal corona "break" when you ride a bike or a horse?

What is meant by "breaking the hymen?" Does penis length make a difference?

The various myths and the incorrect assumption that there is a covering membrane have given rise to expressions such as "breaking the hymen" and "deflowering." These usually refer to a person having their vagina entered for the first time, either by themselves or by having sex with a partner. What’s actually there is the vaginal corona, consisting of elastic folds of mucous tissue, which can’t be ruptured or broken in one fell swoop by a penis or any other object inserted into the vagina. When the mucous tissue is stretched, minor ruptures sometimes develop and may smart a little. These soon heal, usually within 24 hours. The folds of the vaginal corona are located 1–2 cm inside the vaginal opening, so penis length is irrelevant.

If you or a partner have tried to enter your vagina without success, a simple gynecological examination can tell you whether the vaginal corona is an obstacle.

Virginity – what does it mean?

Discussion of virginity revolves around whether a person  has ever had sex. In most people’s minds, the main question is whether or not someone has had vaginal intercourse.

Virginity is a vague concept based on perceptions and myths, chiefly concerning female sexuality, that RFSU (or Scarleteen!) would not wish to endorse. For one thing, virginity is often associated with a heteronormative view of sex restricted to vaginal intercourse between man and woman (in other words, insertion of the penis into the vagina). For another, in many languages and cultures, virginity is synonymous with innocence, the opposite of which is guilt. There is no guilt involved in having sex, and no need to feel guilty about it. What’s more, such myths are used against women in particular; for instance as an excuse for spreading rumors and committing sexual assaults.

We sometimes receive questions about how to know whether or not you are a “virgin.” You are the only person who can decide that. Different people have different ideas about which sexual acts constitute a “loss of virginity.” Some people restrict it to vaginal intercourse, while others count other activities as well.

Is it possible to see or feel whether a woman has ever had sex?

Can the corona be stitched up?

Surgery on the vaginal corona rarely solves any problems, first because outcomes vary, and second because it helps to maintain patriarchal structures and a prejudiced view of women and their sexuality. Some women face the demand that they should have an intact “hymen” when they get married, as a guarantee that they haven’t had premarital sex with anyone else. Surgery on the vaginal corona is unusual (some private clinics will perform procedures, but they are expensive and offer no guarantees regarding bleeding upon penetration), mainly because the outcome is uncertain. Usually the patient can instead be helped through non-surgical therapy. This involves sessions with a gynecologist, counselor and physiotherapist intended to validate the patient’s concerns, strengthen her self-confidence and reduce her self-inflicted guilt.

What happens if the procedure is still performed?

If one still decides to perform the procedure, which is highly unusual, a couple of stitches are inserted on each side of the vaginal corona. The stitches should have dissolved by the time of the patient’s wedding and shouldn’t be detectable by anyone else. However, it is not possible to sew a membrane in place, to recreate something that never existed. Doctors say it’s like “stitching butter” because the tissue is soft and elastic. The stitches themselves rarely cause bleeding and may be discovered if the woman is forced to undergo a gynecological examination prior to her wedding. The stitches may also fall out as soon as the patient leaves hospital.

So, a procedure helps the patient more on a psychological level than on a physical one. Bleeding upon insertion cannot be guaranteed.

Can you tell from a person's corona if they have suffered a sexual assault?

Although you can’t tell from looking at a vaginal corona whether it has been entered, if you’ve been the victim of a sexual assault it’s possible to find traces of your attacker or evidence of an assault. It’s therefore critical to seek medical care as soon as possible after any rape, and not to wash yourself. The injuries that doctors record and the samples they take can be used as evidence in court. Equally important is the need to talk to someone and get counseling and support to help you deal with what has happened.

Reprinted and adapted with permission from the RSFU, Anna Knöfel Magnusson, Lena Marions, Jonas Hartelius with illustrations by Eva Fallström. RFSU is a member of IPPF.

RFSU’s mission since the organisation was founded in 1933 has been a desire to change people’s lives for the better. RFSU is a non-profit organisation independent of any political party or religion. We are dedicated to promoting a well-informed, open-minded attitude to sexuality and relationship issues. RFSU is founded on a firm belief that sexuality and relationships are central to the individual and to society. By informing and educating people and shaping opinion, RFSU aims to break down prejudices, overcome ignorance and improve sexual health in Sweden and abroad. RFSU views sexuality as a matter of individual liberty and human rights, in which all of us have the freedom to be ourselves, the freedom to choose and the freedom to enjoy.

RFSU’s vaginal corona booklet is available free of charge. It can be ordered by email from bestall@rfsu.se or downloaded (PDF).