An Interview With Jiz Lee 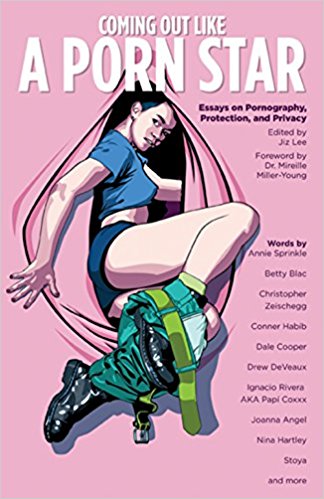 Even more than helping me come out, the stories people shared revealed a lot of similarities, differences, and truths in how we who work in the industry experience sexual shame. I found these stories really helpful as I continue to learn and grow, and knew they'd help others too. It wasn't long before I identified a publisher and gathered about 50 stories from the industry into one bound collection.

I'm very proud of it, and grateful for its contributors, and hope it will help to heal those of us harmed by shame and stigma around sexuality. My biggest hope for the book is that it will become obsolete. Ideally in my lifetime.

Several years ago, you gave a talk at my college, and it was the first time I’d ever heard the term genderqueer. Do you feel like that identity is becoming better known and more embraced? Or does it still feel very fringe or stigmatized?

I'm so glad you brought this up. At the time, I was one of the few people I knew who identified as genderqueer—though now, I use the larger umbrella term "nonbinary," as I feel it's more descriptive and more easily understood. Part of the reason for this is because some people still consider the word "queer" as derogatory, despite its having been reclaimed, and the cisgender people I talk to can identify with the notion of existing within a binary concept of gender. After all, we all experience social aspects of gender in some way or another. Since they understand that binary, the idea of being nonbinary is something they can understand more than say, queering gender. When talking about binaries and what a nonbinary gender identity or expression might be, the people I'm talking with—however they identify—have experiences to share. Despite so many labels, we all feel the presence gender plays in our lives. It brings these relatable experiences together, rather than set us apart.

The world has changed so much since I first came out! Around the early 2000s, I used to feel so alone. My world opened when I came across zines that mentioned genderfuck or genderqueer, though I didn't know anyone personally who identified this way. Around the end of that decade, I started meeting others who felt similar, like Papí Coxxx, one of the first people I met who used the gender neutral pronouns "they/them" and who identified as genderfluid. I cannot tell you what it means to be able to talk to someone for the first time, who can relate to these feelings. I'm sure many people may feel the same thing when they discover my work. And now! Now there are many people who have come out as nonbinary, who use neutral pronouns, and/or who advocate for others.

I was delighted to see the use of singular "they" discussed in publications such as the Washington Post, New York Times, NPR, and of course Merriam Webster's Dictionary. When Facebook (which boasts nearly two million global users) added multiple genders and pronoun options, it had gone far beyond the "I'm not alone" feeling.

That said, it's still difficult, especially working within adult entertainment. I am limited to smaller (and less paying), independent productions, and feel ostracized when trying to fit within mainstream roles—in the rare times that option is presented. The privilege I have passing as cis is a double-edged sword that also invisibilizes. It makes me so proud of others who are just entering the industry or now coming out as they work in adult, and inspires me to do everything I can to continue to help us shine.

Of course, there are even worse myths out there, but thankfully they are finally starting to fade away thanks to the information age of the Internet. Still, some people actually believe: 1) the (incredibly misogynist) assumption that everyone in porn—especially women—is being exploited or trafficked, and that it is all equal to rape; 2) that no one practices safer sex (or has any self-respect to be risk-aware); and, 3) the general opinion that performers lack agency and self-worth. None of these are based in any fact, of course. For example, adult film workers are statistically the safest population on the planet—professional performers are tested approximately every 14 days, and because of our self-created testing system, there has only been one single case of HIV transmission in over the last 12 years.

It's no surprise to anyone visiting this site that many of us do not receive comprehensive sexual education. What's interesting is that many performers learn about sexual health and how to establish their boundaries when they first enter the industry. Because it's our bodies and our work and livelihood, we know a lot more than the average person when it comes to sex and sexual health.

Rather than be an activist, I prefer to be active, period. I value positive momentum and try to create change by using any leverage I have to introduce opportunities that empower myself and others with the tools to produce meaningful works. There's incredible power in this art form, and so much yet to be expressed. Porn doesn't have to be limited—it can be as expansive as human desire itself! With affordable cameras and technology, we can democratize what's possible in alternative and honest visions of sexuality. As you can see, I love my job, and I have a lot of optimism and enthusiasm for what's still to come.