The Art of Getting Bi 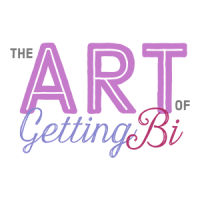 This is already a huge problem for people that identify as gay or lesbian, but this becomes a far larger problem when you identify as anything that isn’t binary, especially as trans or bisexual. God forbid you not identify as the gender you were assigned at birth or you (gasp!) are attracted to more than one gender.

Sometimes the hardest person to believe is yourself. I know.

This story begins with a girl, which is a cliché, sure, but that’s how it begins.

It took me a year to untangle that logical puzzle rivaled only by the Friday crossword in the Times in terms of difficulty.

Through that next year, I did research (as I was and still am wont to do), learned more about bisexuality, prescribed it for myself (didn’t even have to ask my doctor!), and figured that was that. The girl’s out of the picture by now, but that’s another story.

It was then that I became attracted to a boy. I was relatively calm about it. Glee was in its heyday! Boys can like boys, I told myself: everything was fine.

A friend of mine deduced I had a crush, and when I revealed I was crushing on a boy I got hit with the first “Wait, you’re gay?” of many. I explained to her that no, I was bisexual and she understood. But I sensed doubt in her eyes. I’d know that look well.

That doubt sometimes turns into a line of questioning that feels like an interrogation.

“So have you hooked up with boys, too?”

“I ain’t saying nothing!” I say, spitting in their face. (Not really. I didn't actually spit.)

People rarely take my word for it. Otherwise innocuous people I meet seem to become armchair lawyers, psychiatrists and scientists right before my very eyes, trying to prove their hypotheses or forming a case to prove to the jury that I am, indeed, bisexual.

“Would you say you like boys or girls more?”

“If you’ve never hooked up with a boy, how do you know?”

People so often only seem to be able to view bisexuality through their own limited lens: they can’t seem to imagine (talk about a lack of imagination!) being attracted to more than one gender so they apparently need proof, more proof than my experiences seem to provide, anyway. More proof than probably anyone's could, for that matter.

Let’s talk about Game of Thrones. In the fourth season premiere of the show, a character named Oberyn Martell was introduced. Oberyn’s a prince from Dorne. He has a female paramour, Ellaria. He is introduced, along with Ellaria, procuring prostitutes. They choose a woman, whom Ellaria immediately begins to kiss, but Oberyn also chooses the pimp -- a man -- and blatantly comes onto him. Blatant bisexuality of men and women? On my dungeons and dragons fantasy show? The fact that they’re both coded as Latin (the actor who plays Oberyn, Pedro Pascal, is Latin as well), was the cherry on top for me, in terms of seeing people like me on television.

Discussing the episode later with someone, however, was considerably less wonderful.

My lesbian friend was convinced that Oberyn is gay and that Ellaria is just his beard. I was incredulous. A very popular show just introduced two very clearly bisexual characters and even members of the queer community didn’t realize it. These writers were deliberately throwing me and other bisexual people a bone and even then some people just refused to see it and believe it.

It hurts when people don’t believe you, especially people you’re close to, and even have been sexual with. A woman friend of mine, after we’d slept together a few weeks earlier, drunkenly joked that I was "good for a gay guy.”  She clarified that she was joking, and it did have the cadence of the joke, so maybe I’m just too uptight.

These constant microaggressions take a very real, and not at all funny, toll on how I view myself and my sexuality. They make me doubt myself, and think maybe if everyone is questioning and invalidating it, maybe they’re right and I’m wrong. They isolate me. These thoughts and self-doubts linger in the back of my head almost constantly.

But in the end, I do know what I am, even if other people don’t.

I always come out of doubt knowing that I’m the one right about my own sexuality, something no one can know better than I do. Sometimes I’ll explain myself to people. Sometimes I don’t want to, and that’s fine: I don’t owe people that.

I’ve been lucky to have straight and queer friends with awareness and acceptance of  bisexuality. I’ve also been extremely lucky to have met an inordinate amount of bisexual people in college, and without having to look too hard for them. They’re the ones who have helped me reinforce the thought, the knowledge, that my sexuality is real and it is valid. College is good for that, usually, in my experience.

I’ve always been a person that, while usually quiet and reserved, still wants to be believed and seen when the time is right, and the time is always right when you’re talking about something so inherent to your identity.

It’s always discouraging to not be believed, even if you're lucky and it only happens rarely to you. But that’s one reason why bisexuality needs to be more visible: to prove that we deserve respect as valid members of the queer community. To support that we, like anyone else, exist.

Visibility is vital. Without it, I wouldn’t feel half as confident in my sexuality as I am today. With more of it, we’ll all feel more confident. You exist: know that. Your bisexuality is as real as every other orientation and it exists as any other orientation does. Take pride in what and who you are. The people who care about you will take you seriously, even if it takes some education.

And if you tell someone you’re bisexual and someone says “Well, people only like boys or girls” you can always quote Oberyn Martell: “When it comes to war I fight for Dorne, when it comes to love, I don’t choose sides.”