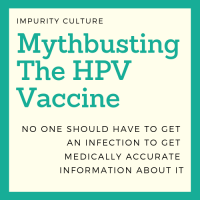 If you need help finding or accessing a healthcare provider so you can get the HPV vaccine, we’re happy to help you through one of our direct services.

I’m an HPV vaccine evangelist. Every opportunity I get, I stand up on my metaphorical soap box and preach to everyone who will listen about why it’s so important to get vaccinated against HPV. But it wasn’t always like this.

The summer before I went to college, I had to get a mole removed from around my knee. For the first time in my life, at the age of 18, I was alone with a doctor for a few moments without my mother in the room.

The doctor wisely took the opportunity to ask me if I was sexually active, and I told her the truth: No. I wasn’t. She looked back at me skeptically, but I repeated myself. No. I wasn’t. At that point, I hadn’t even so much as had my first kiss. I think we talked about the HPV vaccine Gardasil, which had just come out several years before, but my primitive understanding of it was that it was only for girls who were having sex—and since I obviously was saving sex for marriage and obviously would only marry a man who had done the same, I obviously didn’t need it.

At the time, I wasn’t even exactly sure what HPV was, or how it was different than HIV or any other sexually transmitted infection. The discussion of any STI, in detail, had not been part of my hardcore abstinence-only, save-your-first-kiss-for-marriage “sex education.” I knew they existed, and I (thought I) knew you only got them if you were bad. Since I was on my way to Bible college, I wasn’t exactly anticipating what Michael Scott in The Office refers to fondly as a “booze-fueled sex romp.” In fact, I remained sexually inactive throughout my undergrad degree, only getting brave enough to test the waters of the sexual ocean once I had moved across the country and started over in a city far away from everyone and everything I had grown up with. But I still didn’t get the HPV vaccine.

A couple of years later I was engaged to my then-fiancé, only the second man I had ever had any kind of sexual interaction with, and made an appointment to see a gynecologist. At that point I'd learned enough to know that the HPV vaccine was an important thing to have regardless of who you’ve slept with. I started the first round of three shots.

Imagine my surprise when, a couple of months before my wedding date, I was told by the doctor that a small growth that had popped up suddenly on my bottom lip was caused by a strain of HPV. I was devastated, primarily because I had no real education about HPV, including how easy it is to get and how many people get it. I thought I had done something wrong, and all those years of internalized slut-shaming came crashing down on me in one giant wave. All the things I had heard my parents and youth leaders and professors and friends say about “those kinds of girls” must be true about me now.

I didn’t know there were more than 100 different kinds of HPV, many of which don’t cause serious problems and will even usually clear on their own in a matter of months—and mine eventually did. I didn’t know that most people who have ever been part of some kind of sex or sexual assault—80% or more—are infected with some strain of HPV at some point in their life, and a lot of the time they have no idea.

I also didn’t know that it’s perfectly normal. All I knew was a bunch of myths and half-truths that had been perpetrated by leaders of my communities who were more concerned with getting young people to fall in line with their rigid sexual strictures than actually educating or protecting anyone.

I finished the course of the vaccine that year, so now I’m protected for life from the most dangerous strains of HPV—the ones linked to cervical cancer and genital warts.

My own experience with a benign strain of HPV gave me the opportunity to learn about the virus and educate myself about the facts so that I can protect myself and my partner(s) going forward. But no one should have to get an infection to get medically accurate information about it! So if you, like me, grew up in purity culture, where you were taught that the only acceptable expression of sexuality was between a cishet man and a cishet woman in marriage and anything else outside of that is a sin—and critical medical information was withheld from you as a result—I’ve collected a few common myths (and the truth they seek to cover up) about HPV and the HPV vaccine that get circulated in religious environments.

FACT: The HPV vaccine is often given as young as 11 or 12, long before most young people usually become sexually active in the ways HPV is most often transmitted. The HPV vaccine is intended to protect you throughout your lifetime from the most dangerous strains of the virus, regardless of your current state of sexual activity (or lack thereof). It’s a vaccine for everyone of every gender, and you can get it until you're 45 now, whether you've had sex or not.

MYTH: If you’re planning on saving sex for marriage, you don’t need to get the HPV vaccine.

FACT: Planning on saving sex for marriage or for a committed relationship is a perfectly valid choice, but we all know that things don’t always go as planned. In addition, there’s no guarantee that the person you marry will have never been exposed to HPV in the past. Even if you do actually save sex for marriage and marry someone who has also saved sex for marriage, statistics say that one out of every six women and one out of every thirty-three men will be the victim of an attempted or completed rape during their lifetime, which is another way people can contract HPV. No one ever expects to be a victim, but being protected from the most dangerous strains of HPV is never a bad thing.

MYTH: People who have sex outside of marriage deserve to get HPV because they are violating God’s law.

FACT: Nobody “deserves” to get any kind of sexually transmitted infection or other illness, ever. STIs and pregnancy were often touted as divine consequences for stepping out from “God’s plan for sex,” but it’s just not true. I don’t think any god that would punish people by giving them an STI that could cause cancer and death is worth knowing or maintaining a relationship with.

MYTH: The HPV vaccine will increase your risk of cervical cancer/cause you to lose your vision/make you infertile/change the appearance of your vulva/give you PCOS/other side effects.

FACT: The HPV vaccine will not increase your risk of cervical cancer or any other kind of cancer for that matter. It will not cause you to lose your vision. It will not make you infertile. It will not change the appearance of your vulva. It will not give you PCOS. All of these myths and more were made up, often by anti-vaccination fear-mongerers who are typically invested in controlling  people and sexuality, and especially young women’s sexuality. There is zero medical or scientific evidence supporting any of those claims.

MYTH: The HPV vaccine makes young girls/people more sexually active because the fear of getting HPV is gone.

FACT: Getting the HPV vaccine has been shown to have nothing to do with how sexually active young people are. In fact, a study recently published in Pediatrics found that “implementation of HPV legislation was not associated with changes in adolescent sexual behaviors.” The HPV vaccine only protects against certain strains of HPV—the ones that are associated with cervical cancer and with genital warts. It does not protect against all strains of HPV, and it does not protect against other STIs or against unplanned pregnancy. There is no reason getting the HPV vaccine would cause a generation of young people to make different sexual choices than they otherwise would. There are lots of ways to have safer sex, and the HPV vaccine is only one of them (and again, is important even for people who are not having sex). And beyond that, it’s important to remember that using fear as a motivator is not a very good way to make ethical decisions! All of our decisions, sexual or otherwise, should be born out of careful thinking, wisdom, and reflection on our values, rather than fear and panic.

Did you hear any of these myths growing up? Maybe you have friends who still believe them. Share this post and we can help bust the myths about the HPV vaccine so more and more people can get protected!

For more information about HPV, be sure to check out The STI Files: Human Papillomavirus (HPV).