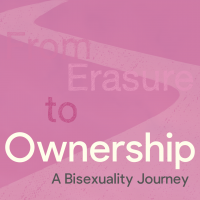 Repeat after me: my sexuality belongs to me, it is what I feel or say it is. How I identify can change as I grow older, but whatever it is now is what it is. These are important affirmations to keep in mind to matter who you are, but particularly if you’re a bisexual person.

Like all kinds of sexual and other identities, bisexuality exists on a spectrum. There is no one-size-fits all way to identify as bisexual and there are many ways for a person to experience bisexuality. The way most people currently define it, to be bisexual just means to be attracted to more than one gender group of people.

There's a lot of misinformation about what it means to be and identify as bi. Over the years popular television shows and other mass media have often portrayed bisexuality as something made up, and have often reduced bisexual people to being confused gay or straight people who can’t or won’t “pick a side,” even though gender also exists on a spectrum, so there aren’t “sides” in the first place.  Another common misconception in both media and our daily lives is that in order for your bisexuality to be “valid”, a person must have an “equal” sexual attraction to men and women, whatever that means. None of this is true, and not just because the sex and gender binaries are both pervasive myths and misunderstandings of both biology and identity. Bisexuality is real, it is beautiful, and rhetoric like this only harms folks and contributes to bisexuality erasure, which can inflict lasting harm of bi folks.

Another form of bisexuality erasure states that there is no such thing as a bisexual cisgender guy. I have a close friend who is bi and he told me that he never came out of the closet until he was in his late twenties because he absorbed the messaging around the false notion that bisexuality does not exist for men, boys, or anyone with a penis. Many people falsely believe that bi men are lying to themselves about their attraction to women or folks with vulvas and are just confused gay men who refuse to accept their gayness. Beliefs like these only harm people and help keep them in the closet.

I experienced bisexual erasure when I was a teenager. The first crushes I remember having were on boys, but I’ll never forget the first time I met a girl and felt weak in the knees. I was thirteen years old. A year later I heard the term bisexual for the first time and felt like it described me.

When I was fifteen, I began referring to myself as bi to people. Thankfully, most of my friends were supportive, but I had one friend who said “Oh, EVERY fifteen-year-old girl thinks she’s bi.” This had a very lasting, very negative impact on me, so much so that years later I can still remember the exact tone of her voice when she said those harmful words. In just a few seconds my identity had been reduced to a silly little phase that I would apparently one day grow out of. This led to me thinking I had to choose between being queer or straight. Like most people, I was never taught about queer sexuality in school and had to forge my own path in learning about queerness. If I had truly comprehensive sex education in school, one that included the nuances of queer sexuality, I might have had the resources I needed to understand that there was no truth to my former friend’s statement, only ignorance and bias.

This erasure had lasting consequences on the way I lived my life. I heard this messaging at a very vulnerable time in my life. It led me to believe I had to choose only one gender to have romantic and sexual relationships with. I chose boys. I spent years believing I was straight, even though I had very intense attraction to girls. It wasn’t until I was in my mid-twenties that I pursued a connection with a girl for the first time. Of course I made my own decisions, and no one forced me to only date boys, but I can’t help but wonder if I would have made different decisions if I didn’t have those dismissive words in my head. While I don’t have any regrets, there is a part of me that wishes I had explored that side of my sexuality sooner and wonders what my life might have looked like if I had.

When describing her sexuality, bisexual activist Robyn Ochs said, “I call myself bisexual because I acknowledge that I have in myself the potential to be attracted- romantically and/or sexually- to people of more than one gender, not necessarily at the same time, and not necessarily to the same degree.” This is a great example of what it means to celebrate and embrace your bisexuality with joy and acceptance, in whatever way that looks and feels like for you. It also brilliantly highlights how bisexuality in and of itself can be fluid. I wish I had heard this as a young person, when I was just discovering my identity. It would have spared me a lot of confusion and inner turmoil, and I know many bi folks who feel the same way.

More talk on bisexuality that I love comes from feminist writer, activist and filmmaker Jennifer Baumgardner in her book Look Both Ways. She said, “What I’m asserting is that we are looking at bisexuality the wrong way, making the identity entirely depending on someone other than the bisexual person him-or herself. If I’m dating a man, I’m straight. If I’m dating a woman, I’m a lesbian. But sexuality is not who you sleep with, it’s who you are. It doesn’t change according to who is next to you.” I love this quote, because it highlights that bisexuality is about so much more than who a person chooses to have sex with or date, it is a core part of their being. A bisexual person could go their entire life without having sex: that does not mean their bisexual identity does not belong to them or isn’t real. A bisexual person can marry someone of the same or a similar gender (who’s straight, even), and that does not somehow cancel out their bisexuality.

At the end of the day, your sexuality is whatever you say it is and no one gets to have a say in how to identity. There is no right or wrong way to exist as a bi person. The spectrum of bisexuality is a joy worth celebrating.