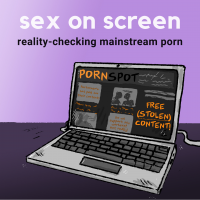 Have you noticed how in plays or other kinds of theater, actors’ backs are almost never to the audience? Say a group of people are on stage standing in a “circle” discussing an important matter. Rather than actually stand in a circle, and block the audiences view of the action, the actors will “cheat out” and form a semi-circle so that each performer can be seen and heard.

The Big-O on Camera

Consent and communication are not only necessities for having sex that isn't abusive, but are also a key part of having pleasurable and fun experiences.

There are also many, many scenes portraying plots of sexual abuse or profound power imbalance—like initiating sex while a person is sleeping, having sex with one’s student, employee, child, or step-child, or coercing, bribing, or physically forcing someone to have sex.

But even though it isn’t shown to us, off-camera there usually is a lot of consent and communication happening.

Best practice is that once a scene is cast, before arriving on set, the performers will review and agree upon everything that will be a part of the shoot—partners, acts, tone of the scene, etc. On-set, they'll often discuss with their scene partner what they like and don’t like. Before filming begins, there will sometimes be a pre-scene interview where the performers articulate on-camera their understanding of that day’s shoot, and afterwards an exit interview where they are asked on-camera if they were harmed in any way or did anything they didn't want to do. So while we as the audience rarely see active consenting and other sexual communication and negotiation, many of these conversations take place off-set.

Just like in many other industries, and in our culture at large, there is a long way to go when it comes to properly protecting people from sexual misconduct and believing and supporting them when it does happen.

What we don’t see is that, off-camera, performers in professional straight porn (not amateur, for example) are required to get full STI testing at least every two weeks through the Performing Availability Screening Services (PASS). PASS provides this part of the industry with rapid response STI results. As Lorelei Lee points out, this means that performers “(unlike most sexually active adults) learn very quickly that they had contracted an STD, would not continue to work, and would be treated long before that STD could cause long-term effects.” For performers to work, they must have valid test results available on the PASS database that indicate they do not have any STIs at the moment.

When it comes to birth control, performers minimize pregnancy risk in the same way that other people do. For cisgender women performing in straight porn, while condoms are often not a birth control choice, they may utilize options such as the IUD, the shot, the patch, the pill, or others. Also, only about 1/4 of performers have had someone ejaculate inside their vagina during a shoot, meaning the majority are utilizing withdrawal as an additional birth control method. While withdrawal on its own is not highly effective, using two forms of birth control is a great way to get pretty close to 99.9% protection.