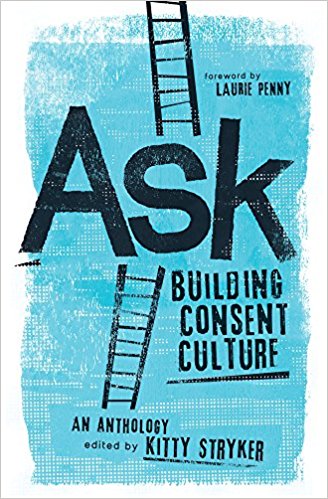 We're some of consent's biggest fans around here, so we're thrilled to have gotten a chance to interview Kitty Stryker about the new anthology she spearheaded, Ask: Building Consent Culture. Kitty is a freelance writer, antifascist activist, and queer sex educator who has been working specifically in the realm of consent for 6+ years, starting her activism early in life. She's also the founder of ConsentCulture.com and an excellent human all around.

Where did the idea for this collection come from? What are you hoping readers will get out of it?

I’ve wanted to do an anthology about consent culture ever since I started speaking out about abuse within alternative sexuality. Having it span consent dynamics outside of the exclusively sexual ones was a concept I settled on after speaking in the UK at a consent panel - talking with people in law, politics, academia and activism made me realize the number of areas consent culture needed to be discussed. While talking about consent and sex is very important, I hope that expanding the ways people think about consent to other interactions like hugging or gaming will help us realize that boundaries and negotiation matter all the time.

For me, consent culture is striving to center consent in your interactions over getting your way. It means listening for both clear boundaries and boundaries that are perhaps a little more convoluted - it means asking questions to confirm, being willing to renegotiate, and responding positively to the word “no”. It means offering outs, and respecting people’s autonomy.

How did you come to be involved in the consent culture movement?

I’ve always been aware of consent as an activist platform from my work with feminist protest, but it really became something I personally focused on after sitting in a dark room, watching “Born in Flames” and drinking perhaps a little too much red wine. I was talking with a friend of mine about sexual assault in the BDSM community… and how often we had both been sexually assaulted as young submissive women. We realized how prevalent the issue was, and decided we wanted to do something about it specifically for those who were considered sexually “deviant” - people into kink, polyamorous people, swingers, etc. who were typically ignored in these discussions.

What do you see as the major challenges to creating consent culture in the U.S.?

The prevalence and acceptance of -isms, certainly. If you believe that some people deserve more bodily autonomy than others, you’re already encouraging a problematic dynamic. I think it’s also a big issue that so many famous people get away with violating consent, that it’s not considered a big deal when it really should be. If we want consent to be treated like something important, we need to respect it as such.

On the flipside, are there things you’re seeing that make you optimistic about the potential to shift towards a consent culture?

I’m noticing a lot more people talking about consent in their daily interactions with each other, which is really heartening. I’m seeing more respect for emotional labour, which is a positive. And I feel like various communities are discussing the best ways to hold each other accountable, which will help create a sustainable consent culture.

What are some ways people can practice consent culture in their daily lives?

When someone says “no” to you, thank them for focusing on their self care. When a person says “no” to you, that’s an indication of trust- they trust you’ll hear it and respect it without a fuss. Show them they’re right! Also, I like to give people a lot of outs, reassure them that it’s okay for them to turn down an idea, and I try to word invites so people feel inaction is a “no” response and that’s okay. And of course ask before you take someone’s photo, or before you hug someone.

You’ve mentioned you felt there are issues with much of the writing about rape culture. Can you talk a little more about that?

How were contributors for the collection selected?

I required that my anthology signal boost the voices of marginalized people who are too often ignored in these conversations. To that end, I made calls for submissions available to non-white and non-cisgender people first, ensuring that I made room for them before anyone else. This also meant they had extra time to work on their pieces, a way of acknowledging that the hustle of freelance writing is often a more difficult balance for those who are not white and cis. I asked the writers to feel free to offer feedback about their contracts to ensure they felt the agreement was fair. My publishers at Thorntree, who feel as strongly as I do about this, worked with me to triple the amount we could pay our contributors. I made a point to reach out to my more marginalized writers to reassure them that they would not be tokenized. I made sure the participants knew that while the foreword, afterword, and editor were all white cis women, this was a conscious attempt to get the work of POC, trans and nonbinary folks into the hands of white feminism… a group who needed to hear it the most.

At the end of the process, even with life complications meaning some dropped out and others took their places, I am pleased to say that 11 of my authors identify as Black, brown, and/or people of color - at least 8 identify as nonbinary and/or transgender. I wondered to myself after my experience... why do so many folks putting together panels, lecture series, books or film festivals, make achieving diversity seem so impossible?

If you could go back in time, what advice would you give to your younger self about sex, relationships, or anything else?

“Nice guys” aren’t always nice, they’ve just learned the language to manipulate you. Look to their actions instead of their words.

If you could snap your fingers and change one thing about the way sex education is done in the U.S., what would it be?

Honestly, we’d talk about consent a lot more, and explain to kids how consent matters in and out of the bedroom. I think by ignoring the emotional aspect of sex, we gloss over the ways kids and adolescents deal with coercion… not just from their peers, but from society at large. I’d hope that encouraging them to figure out what they want, how to ask for it, and how to hear “no”, they’d be much more prepared for healthy relationships.

Ask: Building Consent Culture  comes out October 27th, 2017 and is available for pre-order. You can also check out the Indiegogo campaign for the Consent Culture Book Tour.