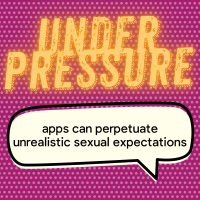 “I’m really jealous, you must be having loads of sex.”

A friend said this to me after my boyfriend moved into my shared house during lockdown last year. Thank god it was a conversation over WhatsApp so she couldn’t see me awkwardly squirming as I replied with an awkward, “Oh yeah, defo.”

Whether it’s a one-night stand after a night out, through dating apps or about those of us in ongoing relationships, there is an expectation that gay men are always having sex.

Dating apps are part and parcel of modern life. Those marketed to the LGBTQ+ community are particularly handy if you don’t have a conventional way to meet others with whom you identify. Perhaps you have low self-esteem or anxiety. Maybe you don’t want to go to the LGBTQ+ scene where you live –there might not even be one there! Whichever it is, for many people it’s so much easier to strike up a conversation through your phone than with a stranger at a bar or at a party.

I used to use Grindr a lot. I didn’t always meet people, but the possibility that you can hook up with someone new each night is exciting, even if you don’t act on it. As a naïve 18-year-old, I also thought Grindr was full of guys looking for ‘the one’, just as I was at the time. Ten years later, I very much realise that is not the case.

The more I’ve engaged with social media targeted at gay men, the more I’ve felt it revolves around sex, sex and not a whole lot else. There is a swathe of gay dating apps where you can find hookups. Grindr, Scruff, and Growlr to name a few. And while the argument is there that the user defines what they want from the app, where are the ones geared towards finding love, like hetero dating app counterparts such as Bumble, Hinge, and Match.com?

Both on and offline, gay culture is hypersexualised. Although sex positivity is a huge part of queer liberation and has led to gay people being largely accepted in progressive society, sexualization is something else entirely. Yet both can be tricky to navigate when it comes to figuring out your own identity. It’s easy for you to persuade yourself that there’s something wrong if you’re not living up to both external and internalized sexual expectations.

Now that I’m in a relationship, the hangover of using apps is still there. When using Grindr in particular, I found it forced me to fixate on people’s bodies above all else. That’s fine for a hookup, but there’s so much more to a relationship than that.

I feel like spending so much time using apps twisted my perception of what a whole relationship should look like.

I fully expected that having a boyfriend would be sex every night with the same person. After a year and a half together, I’ve come to terms with the fact that it’s not. I’m okay with that, but if I’m feeling low, I question what’s wrong — and assume something must be — when we don’t have sex for a few nights… or even a week. Lockdown has only exacerbated these worries and I sometimes find myself asking if we’re still attracted to each other. I conveniently forget that we’re both working and studying in the midst of a global pandemic and are sometimes too tired to do anything other than fall asleep in front of the TV… but that’s another story.

There are a lot of things we’ve done through lockdown that we enjoy aside from sex. We’ve discovered a lot more of our home county together, Northumberland. As a travel writer, it brings me a huge amount of pleasure that my partner is getting on board with my biggest passion. We cook together most days, we’ve decorated our flat in home-made origami cranes, we’ve even built a Lego version of Japan, where we’re hoping to visit in the future.

Spending so much time together over lockdown has also given us time to build up a unique connection and develop such an intimate relationship, the likes of which I’d rarely had before. Intimacy can come in so many different forms. It can be really big stuff like sharing our fears, joys, and hopes (there have been a lot of fears lately). Or it could be something as small as falling asleep on someone while you’re watching a movie together – even physical intimacy is not something you can only get from sex. Intimacy can even come from something so small as reassuring them through gritted teeth that the chestnut sourdough bread they made is delicious.

With this intimacy comes a deep understanding of each other’s boundaries, too. A lack of respect for those and a sense of rushed or false intimacy was probably the biggest reason that I stepped back from other friendships and relationships made on apps.

Relationships are far richer when there are multi-layered. Sex can be a big or small part of your relationship, depending on who you are. But I’ve learnt that emotional intimacy is just as important in sustaining a relationship. There’s so much more to being in a relationship than just loving someone’s body.

Learning My Way Through My Poly Fears