Ethical Horniness, Or How To Find A Partner In An Enthusiastic Consent World 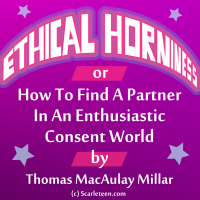 The news is full of the wrong ways to try to have sex. Forever we’ve seen high profile men – almost always men – chasing people for sex, abusively. For the last few years, some high-profile men have been held at least a little accountable for it, which means it is not always swept under the rug anymore. But now that the abuse is more visible, if you stare into that abyss long enough, it might start to stare back at you. You could end up lying on your bed wondering if being a guy while being horny is somehow inherently tainted and gross. Most of us want to find someone or a few someones, for relationships or hookups, but right now, looking at some of that foulness, it might feel like trying to find a partner is a minefield of red flags because men’s sexuality is inextricably abusive.

Sex Is Not Win-Lose

One big problem in the culture is that we have a bunch of beliefs floating around that sex is some kind of zero-sum game where one person is “giving it up” and the other “gets some.”

I called this the “commodity model” in the 2008 book Yes Means Yes: Visions of Female Sexual Power and A World Without Rape.
If one person is getting something and one person is losing something, then it’s hard not view it as somebody taking advantage of someone else.

The most common argument I hear for the idea that sex is a thing where someone “gets some” and someone “gives it up,” is that women are much less interested in casual sex than men, and on really casual observation, that can look true. But when we look at it from the standpoint of risk and reward, it’s pretty clear that it’s more about mismatches in upsides and downsides than about differences in baseline desire. There’s an old, classic study that folks use to argue that women don’t like casual sex, where researchers just propositioned random strangers for sex, on the street, out of the blue. As you might guess, not a lot of women were up for that. But in recent years, psychologist Terri Conley  at the University of Michigan has revisited that, and found that if the researchers control for a couple of basic factors, the differences disappear. Those differences are that (1) many men get off better and more reliably in casual sex with a new partner, whereas, for women, to get off well they may need to break a partner in a bit; and (2) there are safety and social risks for women that most men don’t face. Or, as Conley puts it, “The reason women are turning you down for casual sex seems to be that, for one thing, a lot of you are calling them sluts afterward. A lot of you aren’t bothering to try to be good in bed.”

(Almost) Everybody Wants Some

Most folks have a sex drive: most men, most women, and most nonbinary people. Most of us want to get naked and touch sensitive bits with someone. Wanting to do that is not gross and it isn’t taking advantage of anyone. And actually doing it doesn’t have to be gross or abusive either. It starts with really basic ideas:

Consent isn’t a checkbox. Every app or site we use asks us to check a thing that says we agree to a bunch of stuff we’ve never read, and we only do that because we know that we can’t change any of it and we basically don’t have a choice. Consent – enthusiastic consent, affirmative consent, meaningful consent; that is, real consent – is basically the opposite of that. Consent is the state of being into what is happening, being good with what is happening, and wanting it to continue to happen. It’s not something you flip on or off, at the start or at the end. It’s a state you need to make sure your partner is experiencing the whole time.

Much of our pop culture deals with sex like it’s all between men and women, and like men and women are different species. So this might read like a stereotypical list of things men owe women. But it isn’t. If you change the gender pairing, it's all still true. These are rules that go for all of us. A guy in a sexual situation (with anyone of any gender) has a complete right to be respected, and a right to consent – or not to! Guys can have boundaries, can say wait, or stop, or I’m not ready, or I don’t like that. And guys deserve partners who pay attention to whether or not they’re consenting the whole time, too. The “give it up/get some” way of thinking doesn’t really create space for that, which is another reason it’s busted.

These ideas – co-equal people, everything mutual, continuous consent -- are basic components of human dignity. Sex can be an important part of the human experience. When we’re doing it, we’re all entitled to expect human dignity.

So if wanting sex if okay, and having sex is okay, how do you go from the wanting it to the having it? The key word is “partner.” If you think about the people you have sex with as your partners, you’ll do right by them and yourself.

This is also basically about human dignity. Connect what Dr. Conley said (the problem of guys not being very good at pleasing women and calling women sluts) with the bit about everybody being entitled to human dignity, and you get the old-fashioned “golden rule”: do unto others as you would have them do unto you. (Or any of the several other versions that are around, because this piece of basic insight has popped up independently in more cultures than I can count.)

Your partner, or your potential partner, is a complete human being. They’ve got their own preferences and their own worries and their own stuff going on. So treat them as a potential partner in a mutual activity. There’s stuff you want to do. Preferably with them. So propose that (whether “that” is dating or a relationship, or just hooking up), in a way that makes it an attractive prospect.

How To Be Good

Dr. Conley outlined two problems. One is the slut-shaming. The other is the not being very good. It might seem like the way to fix this is to learn “all the stuff,” the tips-and-tricks kind of stuff about what to do with which finger or erogenous zone, the nibble-the-ear, lick-the-alphabet kind of stuff. But in fact, what most folks need to do is unlearn. Bruce Lee used to say, “the usefulness of a cup is its emptiness.”

That’s it. Really. Some folks might tell you, for example, that “everyone” loves oral sex. But not really. If you and your partner are not so into it, then it doesn’t do you any good. People might tell you that sex only “counts” or goes “all the way” if a penis goes in a vagina, or in some other entrance or whatever arbitrary definition “they” agree on. What good does that kind of keeping score do anybody? That stuff is for gossip, it doesn’t help anyone have better sex.

Your partner may have a head start on how their body works from masturbation. They might, say, already know the kind of touches that get them to orgasm and the ones that feel good but won’t get them over the edge. If so, you can learn a lot if you are safe and not-judgy so they can tell you. Or, your partner may not have that experience, and you’ll both be figuring it out together, which can be it’s own kind of great. But the only way to know if it’s great, is to talk about it. The things you like, say you like, and do more. The things you don’t like, don’t do more of.

To do this, you need to communicate. That’s true for finding a partner, and for having good sex with one. Being a good partner isn’t standing against the wall hoping somebody will notice you, and it isn’t lying still for whatever your partner does, hoping they figure out what you like. Nothing is sexier that the person you want, telling you they want you. And nothing will get you to better sex faster than saying, “here, can I show you what I like?”

Be The Partner You Wish To See In The World

What if you work really hard to be your best self, your genuine self, your confident self, your interesting self, and your crush still isn’t into you? What if you learn to be the kind of sex partner who listens and learns and works with your partner, and you still can't be with the person you want to be with? Your crush might be with someone else, or crushing on someone else, or oriented towards genders that are not yours, or asexual, or taking a vow of chastity … literally any reason at all.

This is where pop culture really steers us wrong. Movies and television are full of stories where refusing to take “no” for an answer works out great, and that’s not real life. The darker corners of the culture are now full of dudes sitting around furious that the woman they like doesn’t like them. They think the girlfriend of their dreams should just show up and fall into their lap. And with that attitude, with the resentment and desperation, who exactly are they appealing partners for, except other people who are already mad at the world?

Fighters say, “either you win, or you learn.” When we don’t get what we want, it hurts. The partner we want will not always want us back, and not everything we want to do will work with the partners we have. We can’t make somebody else want anything. There are no cheat codes for people. We can make space to be sad when things don’t go our way. Being sad about that isn’t the same thing as being mad. But if you handle that with grace and dignity and respect, you can be proud of how you dealt with it, and keep moving forward.

So nobody owes it to you to love you or to have sex with you. And nobody can honestly tell you that you’ll get to be with a particular person – or any person – no matter what you do. But think about the things you do to find a partner and to be a good partner: treat people with dignity and respect, listen to their needs and boundaries, be flexible and prepared to meet people where they are. Those are life skills that nobody has ever been sorry to develop. You can’t go wrong by being a better person.

The Benefits of Being Vulnerable With Other Queer Guys