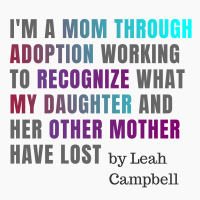 By the time I adopted my little girl, I had spent several years dealing with infertility. I had only been 26 years old when I was told how difficult it would be for me to ever get pregnant. It was news that turned my world upside down. All I’d ever wanted was to be a mother, and having that dream potentially ripped away from me—it was devastating.

And then, just before my 30th birthday, I was given a miracle I hadn’t even known to hope for.

I hadn’t been looking to adopt an infant. I wasn’t paying tens of thousands of dollars to be presented to potential birth parents like I'd have needed to be. I was actually in the process of getting my foster license, with the intention of working with teenage girls.

But then a co-worker introduced me to a friend of hers, a woman who was pregnant and due to give birth in a week. There had already been an adoption plan in the works, but she had pulled out that day after learning the adoptive parents weren’t everything they’d been presented to her as being. My initial instinct was that she probably didn’t want to place this baby for adoption at all. So after hearing her story, I offered to help her find resources that might allow her to keep the little one she was carrying.

She had other plans, asking me once, and then twice, (after I initially said no) to adopt her little girl. When the reality of that situation finally hit me, it felt like an answer to my prayers. And the day my daughter was born was the happiest of my life.

It also just so happened to be one of the hardest for her other mama.

I don’t like to use the term “birth mother.” I think it diminishes the role she played far too much. She carried our little girl from conception, when she easily could have made another choice. And then she made the impossible decision to place her in another woman’s arms. Not because she didn’t love her, but because she loved her too much—because, as she later told me, she wanted her to have something different than what she felt she could provide.

Women who choose adoption for the children they are carrying often have reasons all their own. There may be a history of abuse, or addiction issues. There may be goals and dreams they want to chase that they don’t feel they can take a child along for. Often, there is the obstacle of poverty, which our society doesn’t do nearly enough to help families out of. But I don’t believe it’s ever an easy choice. Carrying a pregnancy for forty weeks, and then handing that baby to someone else? It must require a level of bravery and selflessness that most people simply do not possess.

My daughter’s other mother is a hero in my eyes. She made choices that had to have been incredibly painful to make. She sacrificed in ways most women will never have to even contemplate. And she did it with poise, strength and love for our little girl every single step of the way.

Maybe that’s why her pain juxtaposed against my joy on the day our daughter was born stood out so starkly to me. It’s a hard pill to swallow, realizing that the thing that’s making you so happy is also tearing someone else apart.

It was on that day that I became passionate about learning more about the adoption triad, and particularly the experiences of birth parents and adoptees. I knew my side of the equation—I was getting the thing I’d hoped for most. But I had to dig deep to better understand the other two pieces of that story.

My daughter’s other mother never wavered in her decision. Even when I offered to help her find resources to keep this little girl, if that was what she wanted, she remained firm (telling me to stop questioning her choice). But that doesn’t mean it was easy. This was a child she had carried and nurtured for 9 months. A baby she had whispered to, and even held and breastfed immediately after birth.

She loved our little girl. She still does. Deeply.

We have an open adoption. In the beginning, that involved a lot of emails, phone calls and visits. I must have sent pictures every single day for our daughter’s first few months of life. And I welcomed her other mama with open arms any time she wanted to see us.

But over time, we started hearing from her less and less. She told me once that it was hard, watching this little girl she loved be raised by someone else. She said she didn’t regret her choice, that she was thankful to me for loving our girl so much, but that the pain was still very real. And as my bond with our daughter grew, she felt the need to create some distance for herself.

Relinquishing control of your own child to that extent? It has to be one of the most painful things any person has ever had to do. If you’re ever curious to hear that side of the story, these are some blogs I’ve found helpful in giving me a better understanding of the hardships endured by birth parents. They aren’t always easy to read. Some of the emotions expressed are raw and angry and real. But those women are better equipped to tell their own stories than I ever could be.

Then there are the questions and struggles my daughter has. At six years old, she doesn’t understand why she isn’t able to see her five siblings (living in three different homes in remote villages hundreds of miles away) more often. Or why she never got the opportunity to meet her birth father (who died last fall.) She sometimes worries about what she should call her other mama, and has just recently started to wonder why she was placed for adoption at all.

She loves her life, and she loves me—but adoption always involves loss. And for my little girl, that is a piece of the equation she is just starting to process. When I want to better understand her experience, or to prepare myself for the questions that may still be yet to come, these are some of the blogs I read. Not all of them are happy, and few view their own adoptions in the same light I do. But that’s important too. As an adoptive mother, it’s my job to remain open to, and understanding of, the pain adoption may bring for my little girl.

I will always be thankful for adoption, and my daughter’s other mother. But one thing I’ve noticed is that adoption is often presented to the world purely from the perspective of the adoptive parents. People are given this highlight reel of a miracle coming true.

And you know what? That’s part of it. For me, that’s a big part.

But it’s only part. The flip side of that coin is love and loss and sacrifice; is a series of hardships I could never adequately describe just from my end of the story. And that’s something we all need to remain aware of when talking about adoption.