Gender Confusion: Being Unsure Doesn't Have to Be a Bummer 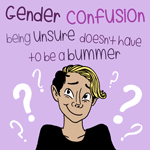 I believe, with complete conviction, that it's totally fine to be unsure of your gender identity.

That holds true whether you're feeling unsure for a few months before coming to understand a concrete identity, or uncertainty and change are components of your identity for your entire life.

I understand, though, that this doesn't necessarily make it feel fine or uncomfortable in the moment: uncertainty can be distressing, for a lot of reasons. It might make you feel less deserving of respect to not have a clear description of who you are, gender-wise. It might make it harder for you to find or create a community of people with similar gender identities. It might make some people less likely to understand or support you. It might just feel like a scary and lonely place to be. Any of these can be true for some folks, and I don't want to diminish that fact. But the pain or confusion doesn't have to be the whole story.

It's pretty common for folks to come to us with gender identity questions, asking what it means to feel a certain way or wanting help sorting through a tangle of gender-feelings that they can't quite make sense of yet. "That's not surprising: gender permeates our lives so completely, and can be so complex, that it's hard not to think about it when questions of identity present themselves. And when the answers aren't clear, those questions can start to feel overwhelming and inescapable. Given how confusing gender can be, I'd honestly be surprised if some people didn't take a while to sort things out.

We're absolutely happy to talk through these questions; as a certified gender-feelings-haver myself, I really enjoy conversations about gender and gender identity! We want to do what we can to help by being a sounding board for thoughts and ideas, offering opinions, and connecting people to resources that they might find helpful. But what we can't do is listen to someone's story and tell them what their gender is, based on what they've told us; identity isn't something that any person can decide for someone else. Hopefully, though, we can help the process of sorting through those feelings, and the state of uncertainty itself, feel less overwhelming and scary.

When you're feeling uncertain about facets of your identity, it may help to spend some time trying out different identities, names, or pronouns for yourself to see how they feel. This might be something you do with certain friends or social groups, or just by yourself; maybe you want to do your exploration in online spaces only, or it might feel more real and practical to do your exploration in physical space. If you're noticing a pull to a certain identity or identities but aren't quite sure how you feel, the best way to know how it fits is to give yourself the space to explore it and/or try it out for a bit. After all, you can admire an outfit in a store display all day, but it's not until you put it on that you can understand if it translates to looking and feeling good on you specifically. There's no shame in experimentation, exploration, gender research, or whatever you want to call it. Keep in mind, too, that just like clothes, no identity is going to be one-size-fits all; descriptive identity words can be helpful and affirming but every person who identifies with a given word will interpret it a little differently, like having their clothes custom-tailored or swapping out a hat for a bowtie. What's important is that you find something that you like and feel good in, and if that means you have to try on everything in a store and cobble your own outfit together from a handful of different pieces, then that's what works for you.

If you try something out that fits for a while but you later realize isn't quite right for you, that's ok too. As every scientist knows, not all experiments are going to be successful, but most will at least provide you with helpful data. You don't need a receipt to make a return to the Gender Emporium, and having a change of heart down the line doesn't invalidate how an identity feels when it is working for you. Even if an identity feels like home and claiming it makes you feel wonderful for a while, if you find yourself less happy with it as time goes on, you don't have to hold onto it forever. It might be surprising or confusing, but it is a normal experience for some folks. Just as with sexuality, many people have a gender identity that's fluid to some degree. As an example: one person might grow up assuming they were cisgender, start questioning their gender in their teens, identify as a binary-gendered trans person for several years, and feel a shift to a nonbinary identity later in life. What it means to identify a certain way can change as well. Fluidity across facets of one's identity isn't unusual,

Gender can be shifty.

Not everyone has these shifts in identity, but they're hardly uncommon. For many people these shifts are a lifelong occurrence. Most importantly, they don't invalidate whatever identities came before. One person might come to understand their gender identity after some false starts and soul-searching, and another might have a succession of identities that all feel right...until the moment when they don't. Still another might have a rock-solid, unshakable understanding of their gender their entire life. None of these situations are better or worse than the others; they're just different ways of experiencing gender and understanding one's identity. Gender is often complicated, after all, partly because people are complicated! It's not unusual to not have an easy answer, and for different people's answers to look vastly different from one another. There's also genderfluid as an identity all its own, which encompasses more than one distinct gender that someone identifies with at various times. These different genders might correspond to different contexts or times, or come and go at random. Someone identifying as genderfluid would not just be aware of the shifting nature of their identity but would find that changing nature to be a key component of who they are.

Occasionally, some folks become invested in making sure only the "right" people claim a particular identity; if someone starts telling you that you can't identify a certain way, it may help to remind yourself that no one, no matter who they are, has the right to play identity police and tell you that you don't belong in the space you feel most comfortable in. Something we see fairly often, in gender identity discussions with users, is an issue where people worry that they "don't count" as trans because they have a specific, rigid understanding of what makes someone trans or what the "requirements" are. Sometimes this sense that one might be trans, but can't be due to not aligning with those perceived requirements, can cause extra confusion. It turns out that some of these assumed Official Signs are based on deeply transphobic cultural messages we've picked up from various places.

One of the most common and persistent myths is the one that says that "real" trans people must have a sense from an early age that their gender isn't the one they were assigned at birth, and therefore anyone who didn't have the experience of that early certainty can't be trans. Setting aside the fact that there's no need for anyone to police anyone else's identity in the first place, there are a few reasons why this persists. It used to be that the only way to access medical transition was to tell this narrative to doctors, because early medical standards demanded it among other restrictions on identity and behavior, and so that narrative became the dominant one for many years out of necessity. Depending on the access individuals have to compassionate medical care, many people still feel forced to uphold this narrative when seeking access to medical transition. When one type of story is being told the loudest, it can be hard to know that any other stories exist.

In addition, it can be easier for some cis people to be accepting of trans people if they are told "I've known this FOREVER" or "I was born this way" vs. "I've been thinking about this since last fall" or "I'm doing some gender experimentation lately." Because of this, it can be tempting to tweak one's personal narrative a bit when talking with loved ones who may be less accepting otherwise. This pressure may also play a part in the anxiety many people have about being uncertain; I suspect that if it were more acceptable, in mainstream spaces, to be openly fluid or questioning about one's gender (or sexuality, or many other things), we'd be seeing a lot more people openly claiming, accepting, and even celebrating those traits.

There are indeed people who, from a fairly young age, have a very clear sense of their gender, but that's not the case for everyone, and coming to that understanding earlier in life doesn't grant someone an extra level of legitimacy. Some folks don't have that clear of an understanding of themselves when they're younger, or have a fluid sense of their gender and don't start to question their assigned-at-birth gender at all until later. Still others aren't exposed to the existence of transgender or nonbinary people at all until a certain age, and don't start questioning their own gender until they have context for their own feelings.

It's possible to feel a bit lost or overwhelmed when faced with a lot of uncertainties about your identity. When you're in that place, what can you do to move things along in your brain, or to feel better about where you are?

Whatever the reason - and I don't think any reasons here are better or more valid than others - if you find yourself uncertain of your gender, or any other aspect of your identity, I hope you'll be patient and compassionate with yourself. Many feel most comfortable having a name for various facets of their identity, and if that's a comfort you're seeking, I hope you can find it. But being unsure of your gender doesn't make you less worthy of respect. You are a whole and valuable person whether you have your identity well in hand or feel like there's a giant question mark floating over your head.