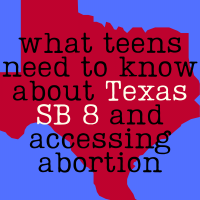 Cross-posted with Rewire News Group. WRITETK is TITLETK of Rewire News Group (RNG), the only media organization dedicated to coverage of reproductive and sexual health, rights, and justice issues. For more stories like this, and to stay informed on the latest in abortion legislation in Texas and other states, subscribe to the RNG newsletter at https://rewirenewsgroup.com/subscriber.

It’s been about a month since the Supreme Court more or less put its stamp of approval on Texas SB 8, which bans all abortions after six weeks with no exception for rape or incest, and only allows abortions to be performed after the six-week mark in the case of medical emergency.

To make matters worse, anyone who helps someone get an abortion—from the abortion provider, to the person who drives them to their appointment—can be sued for a minimum of $10,000 by absolutely anyone in the country.

By allowing SB 8 to go into effect, the Supreme Court has set a precedent that any state in the country can pass a similar ban, and while their decision didn’t technically overturn Roe v. Wade, a six-week ban is about as close to an outright abortion ban as you can get.

What does this all mean? Especially for young people? We’re here to break that down.

The bad news is abortion is now incredibly difficult to access in Texas, and that’s especially true for young people, who already faced significant hurdles even before SB 8 went into effect. Statistics show that in Texas, there are 24 births for every 1,000 women between age 15 and 19, and the state has the highest average of repeat teen births. Teen pregnancy and birth present many challenges and are often associated with poor educational and health outcomes.

To be clear, teen pregnancy is not the problem; the problem is barriers to education and care. Language around teen pregnancy and parenting too often is stigmatizing and centered on prevention, but young people, like pregnant people of any age, can be great parents if that’s what they choose and if given the support they need. They should be given resources to make the parenting decisions that are best for them. Texas is doing the opposite.

For starters, in order to have an abortion right now in Texas you have to catch your pregnancy really early; six weeks pregnant is typically two weeks after your missed period. That gives you, at the absolute maximum, a two-week window to get an abortion. But statistically speaking, young people detect their pregnancies later, and this makes sense. It takes a while to understand your cycle, and no matter what age you are, there are so many things that can make your period late–changes in diet, sleep, stress, or environment can all delay a period or make it start early. 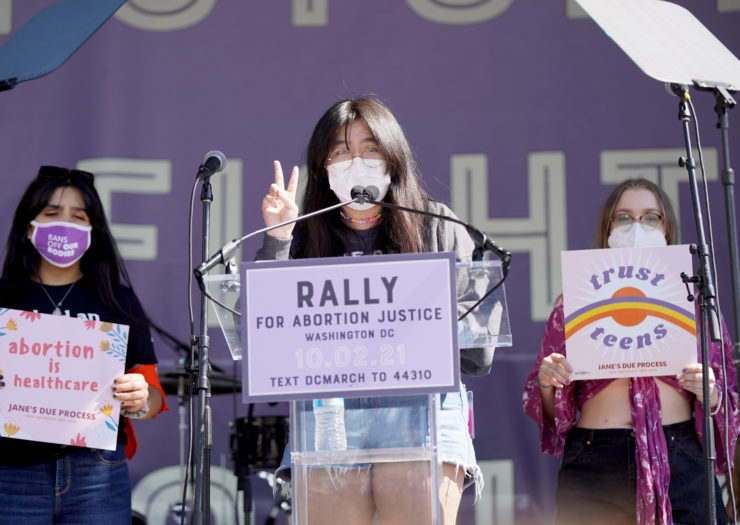 But for young people who can’t involve a parent, parental involvement laws only present further challenges; these are often young people in foster care, or whose parents have been deported or incarcerated, or who live in abusive households. And for these minors, the delays caused by the judicial bypass process will make it nearly impossible to get an abortion in Texas before that two-week window has passed.

As if that’s not bad enough, Texas also enforces a 24-hour mandatory waiting period for all abortions, adding another day’s delay.

The TLDR: If you’re under 18, it’s possible to access abortion in Texas, but thanks to a bunch of harmful laws it’s really really hard.

What to do if you need an abortion in Texas

Put in a call to Jane’s Due Process, a Texas-based nonprofit that works with young people to help them access abortion and other reproductive health care, including by providing support for minors going through the judicial bypass process. They have a 24/7 hotline that you can call or text: 866-999-5263. Jane’s Due Process can also help you find contraceptive services, so if that’s something you want to consider to help protect you against unplanned or unwanted pregnancy, they’ve got you covered.

“SB 8 is so devastating for minors because, on top of the complicated and time-consuming process of getting a judicial bypass, SB 8 would make it nearly impossible to get a bypass and get an abortion in a six-week time frame, says I found out I was pregnant as early as I possibly could and I still had the abortion past six weeks,” said Veronika Granado, a youth advocacy fellow with Jane’s Due Process.

You might be eligible to access a medication abortion, which you can find more information about here. If you have questions about the risks of self-managed abortion, you can contact the Repro Legal Helpline online or at 844-868-2812, or the Miscarriage + Abortion Hotline, which is a free service.

Planned Parenthood Mar Monte has clinics across California and Nevada - Find a Clinic.

Consider your traveling options. Traveling out of state is challenging for many reasons. For young people, the possibility of missing school, finding and paying for transportation, and finding somewhere to stay all complicate the option of traveling to a neighboring state with fewer abortion restrictions. Not to mention the complications added by a global pandemic. But if you can consider traveling, here’s what you need to know:

As always, you're also always welcome to ask for help, support and resources via any of the direct services here at Scarleteen.
How to pay for your abortion. Check out the National Network of Abortion Funds; they have funds in every state that can help cover the costs of your abortion, including travel and lodging. You can also call your local clinic and ask them about any funding sources they might be able to connect you with, and the National Abortion Federation has a hotline that can help with abortion referrals and financial assistance.

More questions? AbortionIsLegal.org has got you. Find resources for paying for abortion, medication abortion options, and locating a clinic at their website.

Finally: Take a deep breath. Things are really scary right now, but there are a lot of people on your side: advocates working tireless to fight these laws and to help pregnant people access abortion care, and abortion providers in neighboring states ready to welcome patients to their clinics.