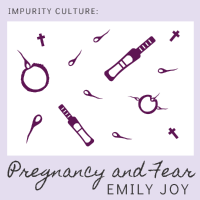 In Linda Kay Klein’s book Pure: Inside the Evangelical Movement that Shamed a Generation of Young Women and How I Broke Free, she tells a story about how she took a pregnancy test at the doctor’s office even though she’d been taking birth control pills and using condoms with her partner. When I read that, it brought to mind something even more paranoid I’d done in the past: I took a pregnancy test once when the most sexual experience I’d had was giving a hand job. I don’t really know why I did it, other than that I’m pretty sure I was convinced that stepping outside the bounds of what I had been taught about sex was sure to have consequences. Surely, somehow, some sperm must have traveled across space and time in exactly the right direction and gotten me pregnant—and that’s what I got for not waiting until marriage. That's what they said happened to girls like me. My anxiety was through the roof during that time, and it had absolutely no connection to biological, medical or spiritual reality.

And it turns out that it’s not just me. I ran a quick Twitter poll while I was writing this article and found that out of 1,843 people with uteruses who responded, 497 had taken a pregnancy test in the past before they had ever had any kind of sex that can get a person with a uterus pregnant. That’s hardly peer-reviewed science, but it also shows that I’m hardly alone. And it’s a really easy thing to feel shame about. On Twitter, several people reached out to me to tell me that they thought they were the only person in the world who had taken a pregnancy test when they couldn’t possibly be pregnant, and just knowing that other people had also had that experience immediately made them feel so much better.

While this phenomenon doesn’t make sense medically, it makes a lot of sense psychologically. Purity culture pedals lots of myths and lies about pregnancy, from theological threats to biological inaccuracies. If you’re a person with a uterus and you grew up in purity culture, it’s totally normal to have anxiety about pregnancy that stems from some of those falsehoods—even to the point of taking a pregnancy test when someone else’s sperm hasn’t been anywhere near your vagina. I’m going to unpack a few of these myths and lies in this column, and hopefully leave everyone reading with an unshakeable sense that you are normal and loved and there is nothing wrong with you if you have ever been affected by purity culture in this way.

1. You Are Not The Virgin Mary

The biblical account of Mary, the mother of Jesus, getting pregnant though a miracle of God even though she had never had sex is one of the most important and paradigmatic stories in Christianity. And there’s a lot of different ways to interpret it—not every Christian community takes the story literally, and there are interesting interpretive issues at play with both the Greek and Hebrew words that often get translated as “virgin” in the Bible. But for those whose communities do take the story literally, the idea that God could make you pregnant even if you didn’t have sex is pretty scary! From a theological standpoint, it’s fine to believe whatever you want about the veracity of the historical virgin birth of Jesus, or not believe in it at all. But it’s important to remember that no matter your theology, from a medical and biological perspective, getting pregnant solely through an act of God can’t happen to you—even if your anxiety is telling you otherwise. Truth is one of the most powerful tools we can use when our anxiety gets out of hand. Gentley confronting your anxiety with facts is the key to getting past this one.

One of the reasons this is such a common fear actually has nothing to do with Mary at all. In the Bible, we learn that God chose Mary to be the mother of Jesus because of her virtue. But often when young people with uteruses who are growing up in purity culture internalize this fear of divine pregnancy, it’s for the exact opposite reason: they believe they have been bad, and deserve to be punished. It’s as though they’ve taken one part of the virgin story and mixed it with the shame that comes from purity culture to create this monster under the bed that threatens to eat you if you stick even one finger over the edge.

2. Pregnancy Is Not a Punishment

That confusion makes sense: when so much religious sexuality education can be boiled down to “don’t have sex or God will be angry and you’ll get pregnant,” it doesn’t take much time before those two threats get conflated. When pregnancy is even more commonly talked about as “consequence” of sex, it’s also easy to start thinking of it as punishment. Parents and teachers and conservative lawmakers alike have all derided feminist movements for promoting “sex without consequences,” and by “consequences" they usually mean pregnancy, along with STIs. As someone who is both staunchly pro-choice and also hopes to be pregnant and have babies in the future, I think we can do better than calling pregnancy a “consequence.”

Unlike the Virgin Mary, many of us who grew up in purity culture spent months or years fearing that God knew we had transgressed the rules—if only just a little—and was going to punish us with a magical pregnancy as a result. But let’s be clear: Pregnancy occurs when a sperm and an egg meet and that fertilized egg then successfully implants on the wall of the uterus. Sperm doesn’t live long outside of a body or another protective environment (such as when it’s frozen for IVF procedures), and it can’t migrate from your hands or your mouth to your vagina unless you put it there. Stomach acid takes on much bigger projects than sperm cells every day. Pregnancy can only occur under very specific conditions—and it cannot occur merely because you had an experience that falls outside the norms of purity culture. I know it's easy to acknowledge this intellectually, but sometimes it's harder to really feel the truth of it in your mind and body.

But that does lead me to my next point:

3. It’s Actually Kind of Hard to Get Pregnant

The way that some churches and abstinence-only “educators” talk about it, you’d think that you could get pregnant as easily as tripping down the stairs or forgetting your keys. By their telling, pregnancy is everywhere, and only if you follow their very narrow set of sexual ethics with extreme care will you avoid it.

But ask anyone who’s been trying to get pregnant for a while without being able to, and you’ll find out that the story is actually a lot more complicated. Sometimes, even if a person with a uterus is having a kind of sex that can result in pregnancy, for various health reasons, they don’t ovulate in a given month. That means there’s not an egg there for the sperm to meet. If they do ovulate and have a kind of sex where sperm goes directly into the vagina, even that is not a guarantee of pregnancy. Lots of factors determine whether a sperm will meet an egg successfully, factors that medical science still does not completely understand. And even if an egg does become fertilized, it still has to implant on the uterine wall—which is the real challenge. Some estimates state that up to half of fertilized eggs don’t implant in the uterine wall and are reabsorbed by the body—low estimates are at about a third. But regardless, that’s a large percentage of fertilized eggs that never become pregnancies. Only if all of the factors are exactly right and the fertilized egg successfully implants do you become pregnant.

If you grew up in purity culture, you probably heard all about birth control. Many churches, parents and educators teach that condoms don’t work, that birth control pills make you infertile, that IUDs “cause abortions,” and many other lies. Purity culture “graduates” would be completely justified in being afraid that the condom they just used didn’t work, because they’ve been told their whole lives that condoms regularly fail. But the facts don’t back this up.

Traditional condoms are about 98% effective with perfect use, and even if you don’t use them perfectly each time they’re still about 85% effective (remember, effectiveness rates a figured for a year of using a method, which means that for any given instance of sex, a method can be 100% effective). If you’re using condoms in addition to another method, like birth control pills (which are 99% effective with perfect use), your protection goes up even more. Obviously we're humans, not robots: there are times when condoms break or someone forgets a pill. But by and large birth control is a very effective way of preventing pregnancy. If you’ve ever had pregnancy anxiety stemming from the purity culture lie that birth control doesn’t work, you’re definitely not alone, and I would encourage you to do some research and empower yourself! It goes back to the facts. When you know the facts, then you can make the choices that are right for you out of a place of knowledge rather than fear.

Purity culture can be kind of a head trip, and sometimes it’s hard to tell what’s real and what’s not. It can be easy for the traumatized mind to attach to a negative thought or idea and spiral downward along with it until you can no longer tell where the trauma ends and reality begins. And make no mistake about it, purity culture is a trauma—which is why I believe it’s so important to talk openly about these things and be gentle with ourselves.

Maybe you feel foolish for taking a pregnancy test when you haven’t had pregnancy-causing sex, or you feel ashamed of letting the lies and fear-mongering of purity culture get to you. Perhaps, deep down, you’re still not sure if you’re really on the right path after all, and you’re just waiting for the other shoe to drop.

But if there’s one thing I’ve learned since leaving purity culture, it’s that living your life waiting for the other shoe to drop is a surefire way to create a self-fulfilling prophecy. If you believe bad things are going to happen to you, you will live as if bad things are going to happen to you and make decisions accordingly. You will shame-spiral and self-flagellate, and all of the mental energy that could have been used on caring for yourself and thinking critically about your situation gets spent on feeling sorry for yourself.

Take your time with this stuff. It’s hard to undo. Go at your own pace, and know that you’re not alone. And if you ever get caught up in the false messaging that was so formative for so many of us, go back to the facts. Hit the books. That’s why a website like Scarleteen exists. That’s why I’m out here sharing about the time I took a pregnancy test when there was absolutely no way I could be pregnant. Because in community, we find our power.

You're Not Pregnant. Why Do You Think You Are?