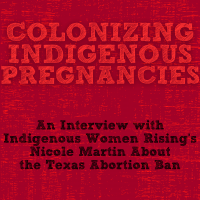 The Texas Abortion Ban, Senate Bill 8 (SB8), imposes that legal abortion can be accessed only within just six weeks into a pregnancy, when most pregnant people are unaware of their condition. And that’s just the start of the many injustices of this ban.

This measure is being regarded as another way of those in power to exert control over pregnant people and those who can become pregnant, particularly the poor, undocumented immigrants, and people of color. Indigenous people are a group that bears some of the greatest burdens and are done some of the biggest harms by SB8 and other bills like it.

Indigenous people have long been persecuted and oppressed on their own unceded land by the government of the United States and the picture gets darker with intersectionalities like gender, orientation and social class. SB8 is tinged with white supremacist, patriarchal and elitist values disguised as ways to help Texans.

In an interview with Scarleteen, co-founder and sex educator Nicole Martin of Indigenous Women Rising (IWR) speaks on SB8 and Indigenous people.

Scarleteen (ST): How are you feeling in the wake of SB8?

Indigenous communities have been experiencing a lack of infrastructure for generations. Access to reproductive healthcare is often overlooked. One area in particular is abortion care. At the beginning of the pandemic, Indigenous Women Rising received an increase in calls for funding for abortion care. Our abortion fund helped Indigenous pregnant people in states like North and South Dakota, Arizona, Florida, Oklahoma, as well as many other states.

We saw the rise of people coming to New Mexico from neighboring states. Within New Mexico, where we're physically located, callers from in state are in dire need of money and basic needs. This is where our abortion fund comes in to offset any financial burdens our callers may be facing.

Some statements in this interview are no longer accurate following the 6/24/22 United States supreme court decision on Dobbs Vs. Jackson Women's Health Organization that has dismantled Roe Vs. Wade, and with it, federal protections regarding abortion and other related healthcare services and human rights. For the most current information about abortion restrictions in the United States, be sure to look for pieces written or updated after that date, or to the resources listed within and at the bottom of this statement.

ST: How will it impact lives, especially lives of those who are, become or can become pregnant, in Texas? How specifically will it impact Indigenous lives?

NM: We expect communities most impacted by the 6-week abortion ban in Texas are migrating relatives, trans and non-binary relatives, those with no or low-income and so on. They are those targeted by this policy that is based on class warfare. Politicians and those in their families are able to access abortion because they have resources. People who are not wealthy will continue to struggle just to have their basic needs met. Reproductive healthcare, overall health is often not at the forefront of people's minds. They have children, elders, or relatives to caretake. Accessing child or eldercare is hard during the pandemic, just to make appointments is already a feat itself. Indigenous communities live in multigenerational homes, some in rural areas hours away from metropolitan areas. Class warfare looks like the rich being able to get an abortion on demand; go to any clinic, receive quality healthcare, while those in poverty have to weigh their options, keep the pregnancy or terminate.

In the end, SB8 is creating a bounty system. It favors “snitches” and the justice system provides them with 10 thousand dollars. Private individuals from any and everywhere can sue anyone who helps someone get an abortion after six weeks in Texas. If they win in court, they can collect $10,000 for each abortion-paid by the person who assisted someone in accessing care.

It is also tinged with white supremacist tones and puts the lower-class and the middle-class at each other throats. It is not only damaging those I mentioned but also challenging the constitutionality of the country and basic human rights. This policy and similar ones are enforcing pregnant people to carry pregnancies that may be unwanted or detrimental to the wellbeing of the fetus or pregnant person.

ST: Obviously, these policies are problematic in a million ways, including that they are decided on by a majority of people who don't even have the capacity to become pregnant in the first place. Given the impact this can also have on indigenous people, what about the fact that as usual, this is another place where colonizers are making decisions about indigenous people's lives and bodies?

NM: Good question and it is a fact! Colonizers are implementing policies to uphold white supremacist, heterosexual and patriarchal ideas in order to continue this situation in place. To oppress and regulate the bodies and livelihoods of those who are not white.  It is rooted in capitalism, imperialism, racism, sexism and Texas policies are disregarding the individuals’ ways of living their own lives. The United States was founded upon these principles so it is not surprising that policies and infrastructure reflect that.

ST: Do you think other states will do what Texas has done? Do you see any way to stop that?

NM: There are actually states in process to do it; Mississippi has the heartbeat ban while others are trying to implement more restrictive policies.

Therefore, to abolish the system we have to recognize its power through voting, lobbying and protesting, and sincerely, I don’t know the solution and common ground to achieve it. In places like Mexico and Ireland, abortion was approved and there is power in policies from grassroots movements and politicians.

ST: In and outside of Texas, can you give our readers a picture of abortion access for those living in Indigenous reservations?

NM: In the Southwest, New Mexico has around 3 or 4 clinics. Texas has 8 clinics. Still, look at the size of Texas and its hardships as immigration, border patrol, checkpoints – where one has to provide documentation - the majority of Indigenous people speak ancestral languages having English as a second language (ESL), our relatives from the south have Spanish as a second language, and not being able to properly speak English or Spanish is another barrier. Transportation also plays a role as many don’t have transportation, so IWR hires cabs or Ubers for them. I [also] recall the curfews that arose during the pandemic. Indigenous communities were most impacted by COVID-19, so in order to protect one another, some communities enforced curfews that start[ed] at Fridays 5 p.m. and finish[ed] on Mondays at 6 a.m.

Are you able to help financially support Indigenous Women Rising?
Here's a link to donate to them. Would you like to find out about abortion funds local to you either to give to them or because you need to fund your abortion? Here's a link to the National Network of Abortion Funds fund locator page.

NM: The United States has 576 federally recognized tribes, nations, pueblos. The Federal Government has a trust responsibility to Indigenous peoples. In exchange for the land they stole, they entered into treaties with respecting Indigenous communities, binding contracts. One of them is healthcare in the facilities of the Indian Health Services (IHS). Each respective tribal government allocates funding to these facilities differently. Within the state of New Mexico, there are 12 IHS facilities: only 6 of those facilities provide reproductive services. Due to the Hyde Amendment and IHS being federally funded, this means abortion care is not provided at IHS facilities. Indigenous people aren’t the only ones impacted by the Hyde Amendment: those in the military, peace corps, or others who utilize federal health insurance cannot receive abortion care. Federal funds will only cover abortion care in the case of rape, incest, or wellbeing of the fetus or pregnant person.

ST: What else is on your mind and do you want to be sure people know about right now?

NM: People have to know that when governments fail their constituents, common people can come together and work to make a change and leave a better future for the coming generations.