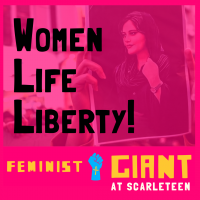 Is it a feminist revolution

Is it a feminist revolution because they’re burning their hijab

Is it a feminist revolution if men are taking part

Is it a feminist revolution if nothing changes

What does hair have to do with the revolution

Glory and power to the women in Iran.

Glory and power to the women in Iran who have seized the narrative and become object and subject. Women are too often the afterthought of a revolution, rarely its reason for being.

The slogan is Kurdish and has its origins in the Kurdish Freedom Movement, with its emphasis on women’s freedom and the struggle for self-determination. The protests have spread across Iran and have been especially strong in the Kurdish areas. It speaks to the intersections of oppressions faced by the Kurdish woman Mahsa Zhina Amini whose death after being taken into custody by “morality police” was the spark of the uprising.

Glory and power to the women in Iran for serving us this challenge: If women (and men) in one of the most perfect police states are this unscared, then what are you doing to fight your oppressors?

Their courage will set your very guts on fire. And put you on notice that you are next, whether you are an oppressor with a small o or a big-O Oppressor.

Glory and power to the women in Iran who have seized the narrative and become object and subject.

In too many revolutions women have died, been beaten, shot at, and sexually assaulted, fighting alongside men to rid their countries of that uppercase Patriarch yet so many lowercase patriarchs still oppress us.

We are no longer scared.

Glory and power to the women in Iran who burn their hijabs and in so doing set our imaginations on fire. The Arab uprisings were sparked by a man — Mohamed Bouazizi, a Tunisian street vendor–who set himself on fire and in so doing sparked revolutions and uprisings in the region that have stumbled and remain incomplete. And here now are Iranian women reigniting our revolutionary hearts with the feminism those Arab uprisings lacked.

Iran is not an Arab country but here come the women there to take up the baton, not by self-immolation but by setting alight a tool of their Patriarchy; a tool many other women in the countries around Iran recognize all too well.

When I heard that Mahsa Zhina Amini, died after being in the custody of the “morality police” who had taken her in because she was not wearing a “proper hijab” I immediately thought of other female lives sacrificed on the altar of a piece of cloth.

I thought of the 15 girls who died in a school fire in Mecca, Saudi Arabia, in 2002, after “morality police” in that country barred them from fleeing the burning building — and kept firefighters from rescuing them — because the girls were not wearing headscarves and cloaks required in public. And then, nothing happened. No one was put on trial. Parents were silenced. The only concession to the horror was that girls’ education was quietly taken away by then-Crown Prince Abdullah from the Salafi zealots, who have nonetheless managed to retain their vise-grip on the kingdom’s education system.

It is no surprise that the Iranian regime accuses the Saudi regime of orchestrating the revolution that has erupted in fury at Mahsa Zhina Amini’s death. Two theocracies so alike in their hatred for women and whose zealotry has for years wrecked lives in the region.

And that is why revolutions for and by women will liberate us all. Feminism liberates everyone. When women are free everyone is free.

There is a scene in Abbas Kiarostami’s film Ten when a woman sitting in a car in Tehran traffic gingerly removes her hijab to reveal a shaved head. When I first saw that scene of the film,  in New York City in 2003,  I started to cry. It had been 11 years since I stopped wearing hijab and it would be another 17 years until I shaved off my own hair.

I rewatched the film soon after I shaved off my hair and that scene still seized me.

What does the revolution have to do with hair?

During the Irish Revolution, both sides would forcibly shave or cut off women’s hair as punishment as well as a way to control women’s bodies.

The Iranian Revolution was co-opted by the clerics who then claimed as an achievement the mass covering of an entire nation’s women’s hair. Who owns my hair, let alone my body, when a revolution in which women fought alongside men soon after declaring victory, enforced hijab? When you shave the hair under that enforced hijab, are you then the revolution of one, defying, disobeying, and disrupting? When you rip off that compulsory hijab in public and shave off your hair in public, are you finally completing the revolution that the theocrats and the misogynists stole from you?

You fucking bet you are.

You signal FUCK YOU, I OWN MY BODY in a way that both Patriarchy and patriarchy understand; oppressor and Oppressor comprehend.

We are more than what’s on our heads and what’s in between our legs.

During the Egyptian revolution, the chants were Bread Freedom Social Justice. The chants we hear in Iran’s revolutions today remind us that none of those are possible without feminism: Women Life Freedom.

And a feminist revolution disobeys all those who insist “People are not ready,” because as revolutionaries we must recognize that if our communities are ready for us, we are too late.

Are you ready? If women (and men) in one of the most perfect police states are this unscared, what are you doing?

Where is your feminist revolution against your theocrats?

This piece was syndicated here with permission from and in partnership with the Feminist Giant newsletter, a newsletter of essays written by Mona Eltahawy, and Global Roundups curated by Samiha Hossain and Inaara Merani. You can sign up for either a free or paid subscription to Feminist Giant here.