Power at the Polls: Why Voting Matters 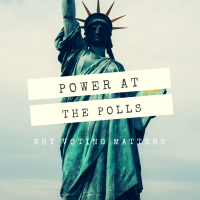 There are important elections happening all over the world on a regular basis. Since many of us who work at Scarleteen live in the United States, we’re particularly invested in the upcoming midterm elections in November that offer voters across the country a chance to mitigate the damage done by the Trump Administration over the last two years, and hold some of the people who caused that damage accountable for their actions. But there are elections in other countries that certainly carry an equal sense of urgency and also offer a chance for everyday citizens to change the political landscape of their country for the better.

At the same time, there’s also a creeping phenomenon where many people see voting as an empty action, something that cannot have any meaningful impact on their lives or social issues. It’s deeply important to us that you know how to vote and, more importantly, why to vote. What we want to do is offer some thoughts on why voting matters, including instances where voting made a big difference to issues near and dear to our hearts like access to sex education, queer rights, and reproductive healthcare. We also want to offer a few resources to help you exercise your right to vote, no matter where you are.

Why We Believe in Voting

Voting allows people a voice in decisions that affect their daily lives. Barring the sudden acquisition of super powers, many people are never going to have as much influence over what happens in the world as they’d like. When you’re looking at big-picture things like civil rights, climate change, or healthcare, it can sometimes feel like there’s no way for you to influence what happens, even if the issue directly affects you or the people you love. Voting is a way to make your voice heard about those issues.

And just in this past year, we’ve seen it’s possible to vote more diverse, progressive candidates into positions of power across the globe. In a time when many people feel powerless or are being told that their desires for candidates who look like them and will work for them are “too radical,” those election results serve as a reminder that the combined power of hundreds of individual voters can have incredible results.

To be clear, voting is not the only way to make your views on political and social issues known. There are many forms of activism, including protests and other types of resistance, to influence those in power. But when fighting for social change, you need every tool at your disposal, and voting is one of those tools.

Another reason to vote: voting also has ripple effects that aren’t immediately obvious. Imagine you vote for a pro-LGBT representative in a local election and they win. Once in their new position, they introduce legislation to create better protections for queer and trans people in your area, and that legislation gets passed. Now you have legislation that makes your area safer for queer and trans people. And, that legislation can act as a model for other places that want to create similar protections, meaning that even more queer and trans folks may benefit from it. So, by voting for a specific person, you’ve helped create a chain reaction that improves life for lots of people. Voting can feel like a small action sometimes, but it can have big consequences.

Finally, voting is important because we are facing an uptick in global fascism and conservative extremism. We need people  -- especially plain old citizens like you and me -- to be politically engaged and active now more than ever. The most vulnerable groups are already bearing the consequences of this shift, and there is a very real chance that these trends will continue to get worse. This is not a pleasant thing to think about, given what these types of extremism have meant for marginalized people in the past. If we do not confront this reality and take steps, voting among them, to address what is happening, we risk being passive at a time when major resistance is needed. We risk our passivity allowing or enabling very real and widespread harm.

We do need to note that in some areas, and for some populations, voting can be difficult to impossible due to a variety of factors, citizenship status, the carceral state, and voter suppression among them. For example, in the U.S. there has been a wave of states purging their voter rolls, meaning that some people who assume they are all set to vote may get to the polls only to discover they’re ineligible (we recommend checking your registration status at vote.org before the voter registration deadline in your state). Acts like purging voter rolls often target groups, such as Black communities, that historically support more progressive candidates.

We, along with many other organizations, are pushing hard on the movement to get people out and voting, including sharing tools to help people navigate those challenges. But we do recognize that some people still may not be able to vote -- including because of their age -- or may do everything right only to find that they are still turned away at the polls. Being disenfranchised is nothing to be ashamed of, and it's not the fault of those who are disenfranchised.

When Has Voting Mattered?

Historically, voting has been super-important when it comes to issues that matter to us. I’ve rounded up a few examples to show you how much voting matters when it comes to reproductive rights, sex education, and LGBTQA rights.

Birth control: Voting influences people’s ability to access birth control in multiple ways. On local levels, entities like school boards can vote on whether to allow contraception to be available at school-based clinics. Local and state governments also have the ability to determine what, if any, “family planning” services to offer in an area, increasing or decreasing resident’s access to birth control accordingly. On a larger level, the politicians you vote for may also affect when, how, and if people can access birth control. In 2012, the Philippine Congress passed legislation that made it far easier for low-income and rural individuals to obtain birth control. Moving in the opposite direction, U.S. politicians continue to try and limit contraception access through the Affordable Care Act. Politicians can, and do, also push for things like “religious exemptions” that make it easier for pharmacists to refuse to fill prescriptions and employers to decline to cover birth control costs under insurance plans. This introduces barriers to access for affordable contraception.

Sex Education: Voting influences people’s access to comprehensive sex ed in a few different ways. At a national level, the people voted into office can decide what types of sex ed, if any, to fund. Depending on who wins elections, you can go from a government that only funds inaccurate, fear-based sex ed to one that funds inclusive, comprehensive sex ed and vise versa. What type of sex ed programming gets funding can have far-reaching consequences when it comes to things like STI and unintended pregnancy rates, rape culture, and LGBTQA issues. We’ve seen this in the U.S. and recently in Ontario, where the results of a recent election lead to a roll-back of the modern sex ed curriculum and promotion of a horrifically outdated and incomplete curriculum.

Sex education can also be influenced by local politics and votes. In some places, sex ed programming is decided by cities or school districts. For instance, in the state where I live, each school district gets to decide what type of sex ed to offer students. One major city has a comprehensive curriculum, another has an abstinence-only one. This means a huge chunk of young people in the state are not getting the kind of sex ed they need and deserve.

Abortion: A very recent example of this is the campaign to repeal the 8th amendment, which banned abortion in Ireland. Pregnant people had to travel huge distances to access abortion services, and were sometimes denied life-saving abortion care. Through an immense amount of organization and campaigning, pro-choice advocates helped people vote yes to repealing the 8th. The movement to repeal gained so much momentum that Irish citizens from around the world flew back to the country in order to vote in favor of the repeal. Because of all the people who organized and voted in favor of a pro-choice Ireland, a necessary reproductive right is in the process of being restored.

Another timely example of how voting influences abortion access is that elected officials in the U.S. have the power to confirm a Supreme Court nominee who will almost certainly try to overturn Roe v Wade, massively restricting abortion rights in the U.S. If the nomination is delayed until after the midterm elections, it could have very different results than if it happens now, based upon who is voted into the Senate in November. This scenario also illustrates another reason why who you vote into office matters; they have a say over who gets put into positions, like the Supreme Court, where citizens don’t get to vote.

Same-gender marriage is a common issue to appear on ballots. While a Supreme Court decision made it legal across the U.S. in 2015, I can remember the time several years prior to that when Prop 8, a ballot measure in California that was designed to ban same-gender marriage, was passed by voters. The result was devastating to the queer community and was only overturned when the Supreme Court came to their decision several years later. More recently, a voter’s survey went out in Australia to gauge whether the population was for or against changing the legal definition of marriage to be “between two partners.” The results of the survey were “overwhelmingly in favor” of changing the definition, increasing the rights available to same-gender couples across the country.

Another example is the seemingly never-ending barrage of anti-trans “bathroom bills” turning up on state and local ballots. These measures are often designed to restrict the rights of trans and other gender nonconforming people, and whether those measures are voted into law sends a strong message about how safe that area is for trans folks. Voting when these measures appear on the ballot means you help keep the rights that trans and queer people have worked so hard to secure from being eroded by bigoted individuals.

Hopefully these examples demonstrate why it’s so important to vote if you’re able to, and maybe inspire you to see that change is possible through voting. We’ve included some country-specific resources below to help you with that process if you’re feeling stuck. (If you know of a great resource you don't see in the list below, or have resources for a country we didn't list, please fill us in!)

I encourage you to find the tools you need to vote and to share them with as many people as possible. Because the more of us who exercise our right to vote, the better chance we have of creating communities where everyone is safe and welcome.