Where The Wild Things Are, Or, How Scarleteen Came to Be 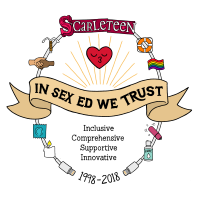 Once upon a time, there was an Internet.

Well, not really an Internet.  Not the way it is now.  Not with all the bells and whistles and gizmos and gewgaws and streaming services and algorithms and a bajillion sites all trying to tell you what the one shocking secret you’ll never guess might be and the ability to buy virtually anything from just about anywhere at absolutely any time at all.

(I mean, this was before the Internet was really even very interactive.  You could read and you could click on stuff, and send and receive email or spend some time in a chatroom, but the idea of something like Twitter would’ve seemed like crazy moon talk, and a Vine was something that grapes grew on.  You get the picture.)

The Internet, back in 1998, was a smaller place.  A quieter place.  A place to which a lot of people with a lot of dreams and big plans gravitated because the Internet looked like a place where an enterprising person, or group of people, could create a whole new world by publishing content online. It was pretty wild, to tell you the truth, even though it was quieter and smaller.  People were doing some way-out, unprecedented, groundbreaking, awesome things with this brand new Internet thing.

Heather Corinna was one of those people, and in a much smaller way, I was too.  And when we first met up -- online, no less, which was a rarity back in those virtually Pleistocene days -- we soon realized we shared some wacky dreams about creating sexually explicit entertainment and sex information by women, for women.  Sexual content made by women, for an audience of mostly women, was a real rarity at that time, and Heather’s website Scarlet Letters was among the very first websites ever, anywhere, that delivered feminist, queer-inclusive, thoughtful, smart, sexy material by and for women.  I joined Scarlet Letters as an editor and writer, and was part of the collaboration for quite a few years.

Scarlet Letters doesn’t exist any more, so I’ll tell you a little more about what it offered: it included stories, nonfiction articles, sex education articles and columns, still photography, digital artwork, and even poetry.  Another thing it included was the by now standard age disclaimer, a page at the opening of the site that asked the user to click on one link if they were under 18 and thus not legal to look at sexytimes content, or a different “over 18” link to take them into the site proper.

That, believe it or not, was where Scarleteen started.

I agreed.  This seemed condescending and really counterproductive.  I remember thinking about a particular teenager I knew and imagining how angry they would be if they were looking for sexuality content and some website effectively handed them a pair of mouse ears instead.

Probably, or so we reasoned, having been under-18s looking for sexuality content once upon a time ourselves, a lot of the under-18 folks who found their way to Scarlet Letters were actually looking for information more than they were for smutty stories.  A few of them had even already written in, asking for advice, pretty obviously looking for something like we had in mind.  We couldn’t legally give them the smutty stories anyway, but we could legally give them information.  Besides, we figured it would be a friendly gesture and a good idea to provide sex education where we could.  Abstinence-only sex education legislation had been recently passed (thanks, Bill Clinton…) and we knew that meant that a lot of teenagers and young adults were losing the best source of accurate sex ed they’d had.  We had the means to help, and the motivation.  So we did.

But we didn’t want to provide just any old sex ed, or to cut-and-paste other people’s content.  We wanted to do it better.

It was important to us that the sex education we offered be as real as we could make it.  We wanted to provide sex ed that taught readers how to avoid problems like unwanted pregnancies and sexually transmitted infections, sure.  But we also wanted to provide sex ed that didn’t lie about the fact that sex can be a good thing and a pleasurable thing, that not everyone was straight or cisgender, that not everyone was necessarily going to be monogamous, that sometimes people had histories of sexual or other abuse, that relationships could be complicated… and much, much more.  We wanted sex ed that acknowledged that teenagers and young adults were smart, capable, thinking, feeling, decision-making human beings, and that they both wanted and deserved better sexuality information than they were getting.

And so Scarleteen was born, out of Heather Corinna’s genius and a radical idea that sex ed for teens and young adults didn’t have to lie, moralize inappropriately, or just generally suck.  Oh, and a whole lot of volunteer hours on everyone’s part, and calling in a lot of favors.  It takes a village to raise a sex ed clearinghouse, y’all.

Now, you have to realize that nothing, NOTHING like this existed at the time. Not on the Internet, and only very rarely anywhere else -- the Our Whole Lives program run by the Unitarian Universalist Association was one of the few other wholistic sex ed options (and it remains an excellent program!). LGBTQIA+-positive sexuality education materials for adults were just starting to be produced in and by the sex-positive community. Doing the same kind of sex ed for the under-18 population was all but nonexistent because, as far as I can tell, few people bothered to think to do it, and fewer still were willing to take the risks of doing it.

Heather was. None of it would’ve happened without them.  Heather was the ringleader, chief cook and bottle washer, cat-herder, editor-in-chief, provider of vegan pizza, fundraiser extraordinaire, coder, graphic designer, and far, far more.

Miraculously, twenty years later (TWENTY!  How is that possible?) they still are.  This sex-ed side project took over their life and their career.

I'm no longer involved with Scarleteen. I haven't been for a long time -- I had other projects to do and other places my life took me. Heather, in their unbelievably, beautifully, mindfully, lovingly dogged way, kept Scarleteen running and growing and putting the info and the compassion and the support out there.

Often they've done this with little to no money. Typically, Heather's done the lion's share of it themselves, with a rotating cast of volunteers and assistants to help out.

Characteristically, and heart-swellingly, Heather has done this entirely *independently*. Scarleteen doesn't have any allegiance to funders who can tell it what to do, and in particular is not shackled by state or federal funding requirements.  Scarleteen is one of the ONLY sex ed providers that can make this claim.

This, my friends, is an amazing achievement. But it is far from the only amazing achievement Scarleteen can claim.  I am a professor now, a historian and women’s studies professor who researches feminist health activism and organizations.  One of the things I can tell you is that historically, very few feminist health organizations survive anywhere near as long as Scarleteen has.  Most of them, in fact, disappear before their tenth anniversaries.  Not Scarleteen.  It has provided its services free of charge, twenty-four hours a day, seven days a week, every day of the year for twenty years, a walloping 175,200 hours of service available for absolutely anyone who found their way to the website.

That, my friends, is a long time.  Twenty years is a pretty long time by any reckoning, and it’s an even longer time on the Internet (Internet years are kind of like dog years, they are longer than they look).

What that twenty years means, in no uncertain terms, is this: Scarleteen is a modern-day sexual health miracle and Heather Corinna is at the heart of it.  I am endlessly proud to have been part of it, even just in small ways, at the beginning and along the way.

Scarleteen All Growed Up: Beppie