Getting Real: Relationships on the Net 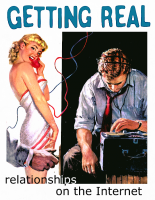 This is not another article about how everyone you meet on the net is an axe murderer.

The Internet can be a great way to communicate - that's why this website is here, after all. Many people successfully find friends, girlfriends or boyfriends over the 'net , and some of my closest friends are people I first met online.

Because it doesn't involve going anywhere in person, and because it's so easy to be anonymous or control how much personal information you give out, the Internet can be a very safe way to explore and interact. But it's easy to go to the opposite extreme and imagine that the Internet is totally safe or that we don't need to take the common-sense precautions that we would take for granted elsewhere.

When you're sitting in your own room looking at the computer screen, it's all too easy to forget how public the Internet is.

But if something's on a website or a bulletin board, anyone can read it. And that means anyone. One useful rule of thumb is that if you wouldn't want to put a particular bit of information on a billboard at the end of your street, you shouldn't post it on a website or announce it in a chat-room either.

In particular, that also means being very, very cautious about telling people your real name or phone number (let alone where you live), or where you go to school, or any other information that might be used to identify you or find you ' especially if it's alongside intimate details about your sex life or emotional problems.

Even posting your e-mail address can get you deluged in spam and/or very weird messages from strangers who may come across it and decide to e-mail you. I run a website, so every morning I have to clear out a virtual pile of e-mails offering me everything from penis enlargement to plans for an alien spacecraft. Sometimes it's just ridiculous and annoying, but I've also been sent stuff which has revolted or frightened me.

So be choosy about who you give your details to. Once you've given them out, you can't take them back. Don't give someone information like your phone number unless you're absolutely certain that you want that person to be able to contact you again.

And remember that information can travel. Once a photo or a personal confidence leaves your computer and goes to someone else's, you can't control where it goes next. If an online friend turns out to be deceiving you, or even if their feelings about you change and they want to hurt you later, your private information has passed into their hands - and they can post it or share it wherever they want.

Okay, you've probably heard this before. But some of the horror stories are true.

The Internet makes it very, very easy for people to flat-out lie about who they are. Someone who says they're a 14-year-old girl might actually be a 40-year-old man (or vice versa).

Some people will build up amazingly elaborate and entirely false identities and stories. This might be because they're exploring different identities and don't realize how hurtful it can be to people they deceive. Sometimes people treat the Internet as their own personal fantasy computer game, and forget that they're interacting with real live human beings.

Some people lie in a misguided attempt to get attention and sympathy. They may think that they'll get more support from others if they make up dramatic stories or ask for help with a crisis for example, falsely claiming that their parents have died, or that they have cancer.

Others get off on fooling people they might get a sense of power out of manipulating others, or see it as a 'prank' and not be aware of the pain it can cause.

And sometimes people lie out of more sinister motives.

There are a few people out there who are out to exploit or hurt teenagers or young people, especially those who seem vulnerable. Some of them will use the Internet to 'groom' people for abuse getting you so involved and emotionally dependent on them that you won't protest when things get nasty.

So don't switch off your common sense. For example, if someone's stories don't add up, if something they tell you turns out to be untrue (even if they have a plausible-sounding excuse), or if they start insisting that you don't tell anyone else about them or that you meet up secretly, that's when the alarm bells in your head should start ringing loud and clear and you should clear the area, for good.

Most of the people you meet on the Internet aren't going to be out to get you. But there's another sort of con-job the one we can do to ourselves.

Even when everyone's telling the truth, people naturally act differently in different mediums. I hate talking on the phone, for example, so someone who'd only ever spoken to me on the phone would probably think of me as monosyllabic and tetchy. Someone who comes over as confident on the net may be really shy in a face-to-face conversation.

The Internet makes it very easy to control how you present yourself. People can't see your expression or your body language, or hear your tone of voice, or observe how you behave in everyday life. They can't talk to your friends or family or other people who know you. And you can spend hours re-writing an e-mail to make just the impression you want.

Those aren't always bad things. But it means it's important to remember that if you only know someone from the 'net, you only know one limited aspect of them. You may know some very intimate things about an online friend, and still be totally surprised by what they're like if you meet them in person.

Sometimes you'll meet up with someone and find you 'click' just as much as you do online. But sometimes, many times, you won't. That's just a fact of life, and it's a reality you need to be prepared to accept.

In addition, when there are lots of things we don't know about someone, our imagination usually fills in the gaps. And we tend to imagine people just the way we'd like them to be. That makes it very easy to convince ourselves that someone is 'perfect', especially when we're all excited about a new relationship.

But, as the man said in Some Like It Hot, nobody's perfect.

Everyone has flaws: it's part of being human. And no two people are going to agree about everything or like exactly the same things. Those flaws and differences may be no big deal, they may take some work and negotiation to live with, or they may be so major that you can't get past them - or shouldn't try to. But they're going to be there, and having a relationship means dealing with all of that.

Does that mean you can't get to know and like someone on the Internet? Not at all. But if you convince yourself before you've even met in person that they're the most perfect wonderful special person the world has ever known and undoubtedly your predestined soul-mate well, you're setting yourself up to take a big emotional fall.

One particularly important thing you can't tell over the Internet is whether or not you'll have any physical chemistry with someone - even a photo can only give you a vague hint, since chemistry isn't just about one person finding another visually attractive.

It's easy to tell yourself that mere physical details don't matter and you love someone for their mind. But it can be awkward and painful if you decide that someone is the love of your life and then meet them and find that they don't turn you on at all. They may be a nice person, they may be very good-looking - but they don't happen to ring your bell, or something about them grates on you. And you can't force yourself to feel attracted to someone when you just don't.

So it's not a smart idea to commit yourself to a romantic/sexual relationship before you've actually met someone face-to-face and spent time together. It's okay to discuss the possibilities - but leave room for both of you to back off and decide to be 'just friends'.

Once you've got to know someone online, there are some ultra-simple safety rules you can follow if you decide to meet up in person. In fact, these are pretty smart moves when you're meeting up with anyone you don't know well a friend of a friend, a blind date, or a person you've only met briefly at a club or concert.

1) Arrange to have your first meeting in a public place, like a coffee shop. Do NOT go to their house or invite them to yours.

This isn't just a safety rule; it's also a way to make your first meeting more comfortable. Meeting on 'neutral turf', with some sort of activity planned, even if it's just having a latte together, takes some of the pressure off, and means you'll have something to do in case you both go blank and just grin inanely at each other (which, believe me, can happen).

2) Make sure that someone you trust knows where you're going, the name and details of the person you're meeting, and when you expect to be back. Consider bringing a friend along with you. If you're a minor, you need to let your parents know about your meeting in advance.

3) Control your own transportation. Whether it's having a car of your own, or taking money for a bus or taxi, make sure that you can leave whenever you want to. Don't make yourself dependent on the other person for a lift.

Hopefully, all these precautions will turn out to be unnecessary. But knowing that you've taken sensible precautions can make you more relaxed and sure of yourself. And in a worst-case scenario, they could save your life.

If someone freaks out at these precautions and starts accusing you of not trusting them or being paranoid, that should be a big, flashing, neon warning sign. It doesn't necessarily mean that their intentions are evil - but it does mean that they're not being realistic or mature, and not respecting your right to take care of yourself.

Not only should you not agree to skip precautions, you might also want to think about whether you want to get involved with someone who's going to pressure you to put yourself at risk. In fact, if someone is smart and sensible, they'll understand that these safety rules protect both of you.

Even if it goes brilliantly, meeting someone for the first time in person after you've got to know them well online can be a major shock to the system. So give yourselves time to deal with it, and try to keep your first meeting low-pressure.

Often we talk about 'real life' or 'the real world' when we mean 'not on the Internet' hence the popular acronym IRL (In Real Life). That implies that the Internet is 'unreal'. And it's certainly true that online interaction can be different from everyday, face-to-face interaction in a number of important ways.

But the Internet is part of the real world too. It's possible to make very real friendships online, but there are also real dangers and real risks, especially when the online and offline worlds collide.

And in real life - online or off - one of the quickest ways of getting into trouble is to forget that real people don't always match the images of them in our heads.

How to Make New Relationships, Add New People to Pods and Have Sex More Safely During the Pandemic