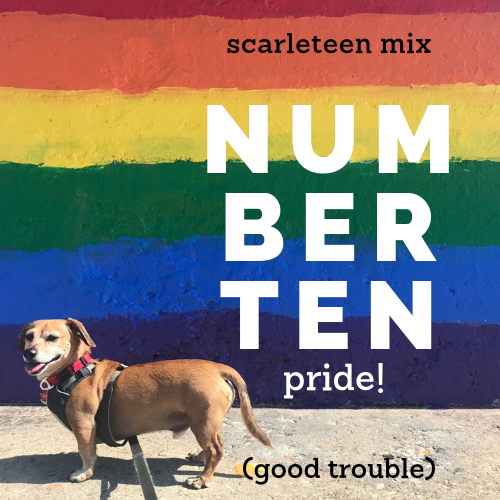 Want to start listening while you read? You can pick up this mix edition on Apple Music or Spotify right this very second.

Pride can be all kinds of things.

One of the things Pride -- and other ways we can claim and stand up for space and visibility for ourselves and others as queer people, trans people, nonbinary people, gay and lesbian people; as pansexual, bisexual, omnisexual, asexual people, as intersex, as questioning, and at and in all our intersections -- can be is positively disruptive.

I'm talking about what civil rights activist and United States Congressman John Lewis calls good trouble: about upsetting the status quo in order to help quash oppression and forge the way for expanding freedom instead of removing or limiting it; for creating culturally and personally positive change.

I remember a time not too long ago when we took an awful lot of crap around here, and encountered an awful lot of pushback -- even from some of our peers who are on board now -- when it came to queer, trans and otherwise non-heteronormative representation and inclusion in sex ed.  We faced some big-time resistance (and a great deal of harassment: we still do sometimes, unfortunately), for, for example, taking things like assumed and assigned gender out of the way we talked about sexual anatomy, or because we didn't segregate information for straight people and that which includes the rest of us, or even because I and others working with Scarleteen simply had the audacity (gasp!) to be visibly out queer people providing sex education in the first place, and without leaving our queerness at the door, no less.

I remember doing a radio interview in the early 2000s where they put some man on who accused me of providing sex education with the express purpose of "turning young women gay." I assured him that despite a lot of very lonely queer people wishing hard for that kind of power on occasion since probably ever, none of us actually had it (and also that no one seemed to be working harder than straight men to try and turn women off of them, so maybe he wanted to go talk to his bretheren instead of me about that).

There are still plenty of people around like that or who still patently refuse to be inclusive or think that way. But all of those kinds of things are still far more accepted by far more people now, including some of the people or groups who didn't used to be accepting even just a few years back.  Pride and many other kinds of good trouble in the interest of QUILTBAG/LGBTQ rights, visibility, love, community and plain old (but often hard-won) joy have helped us all move forward.

By all means, fighting for your mere right to be out and have community spaces like Stonewall was very, very powerful good trouble.  I absolutely think that creating, providing and standing up for sex and relationships education and information that fully includes those of us who are queer and trans/gendernonconforming people is good trouble. I think, if you can, helping to organize something around or about Pride is good trouble.  Some of the musicians in this mix have made (and some still make!) good trouble by being visibly queer in music, both by disrupting that industry and by giving so many of us the ability to feel seen and heard just by turning on the radio (once-babyqueer-me will never ever be able to thank David Bowie, Boy George and Elton John enough). Over the years, some of our users have positively disrupted Scarleteen just by speaking up to us about something they needed or wanted or didn't think was as inclusive as it could have been, helping us adapt or change positively ourselves: today I'm thinking particularly of both asexual and trans members of our community (thank you!).

I think attending a Pride event, if you can, and seeking out and taking in what you want from it that feels powerful and beneficial to you -- whether that's making yourself visible, finding community, celebrating your friends, hooking up, supporting your Mom, blending in without being visible to feel safe, presenting exactly how you want to for once, exploring identities -- can be good trouble. That's not just because when we participate or recognize Pride in some way we're acknowledging and honoring our elders and our ancestors who fought so hard to the great benefit those of us who came after, but that's absolutely part of it.

Pride parades or marches aren't for everybody, though. Some of the ways many of us participate in Pride simply aren't or aren't always accessible for everyone, whether that's about accessbility when it comes to disabililty, a lack of Pride within a community in the first place, personal safety, just not feeling ready to be so visible, or just not feeling very represented. (Elly Belle over at Teen Vogue suggests some great Pride alternatives, by the way.)

I'm sorry if Pride events are something you really want to be for you but just aren't yet: I hope that's something that changes for you soon. But I also think that doing whatever we can to accept and celebrate ourselves, in any way, has the capacity to create powerful change, certainly for yourself, but also outside yourself, too.  I even think just being queer, just being trans, just being nonconforming in any other way when it comes to the dominant paradigms du jour, just being who we are, not assimilating (as much as that works and is a match for what you actually want, anyway), even just holding our own space for yourself by yourself makes a whole lot of good trouble. We don't often act the same ways when we don't accept ourselves as we do when we do: when we accept, affirm and celebrate ourselves for who we are, as we are, when we see ourselves with compassion and care and respect, I believe that flows out to everyone else, even if it seems small or subtle. Small, incremental changes are powerful, too, and they're also usually how bigger change happens.

This Pride month is almost up, but before it's done -- even if Pride is just not your thing -- I hope you can find ways to disrupt some dominant heteronormative/cisgender/binary paradigms, even if that's only with, for or within yourself. You're always a perfectly excellent place to start and to experience some positive, affirming, and powerful change.

P.S. My dog and occasionally self-assigned Scarleteen mascot Trouble Pants would like you all to know he is also good trouble, and if he can do it (most of the time), so apparently can you.

If you're going to pitch in with or start your own revolution, you're going to need some anthems. Sam, Alice M., Izzy, Jacob and I crafted you a mix this time that's full of good trouble and we hope will power you up in all the best ways.  Check it out on Apple Music or Spotify. Happy, happy, happy Pride, everyone!