So Brett Got Confirmed. Now What? 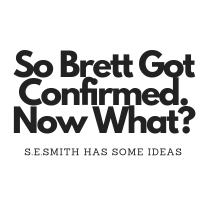 The nailbiter confirmation vote for Brett Kavanaugh has many people feeling dispirited and frustrated. Even before the revelations that Kavanaugh committed multiple sexual assaults, the hearing felt impatient and rushed, with Republicans eager to push it through before the midterm elections. After, in the face of dwindling public support and calls for further investigation, it feels like a slap in the face to see the senate voting for his confirmation — and then celebrating it.

If you’re feeling raw, furious, betrayed, or any number of other things after the confirmation, you’re not alone. At Scarleteen, we’re pretty enraged too.

It’s not just that Kavanaugh’s legal history suggests that he will be an extremely conservative jurist who is also pretty sloppy with the rules. It’s also that we spend so much time trying to build a better world for young people, and telling you that being kind and respectful to each other is the right thing to do, and it’s infuriating to see men like him rewarded. And to see people dismissing his abusive history with “boys will be boys.” We know that behavior like Brett’s is the result of unchecked toxic masculinity and privilege, not because he was a teenage boy, and we hope you do too.

Especially if you’re not eligible to vote, you may be wondering what you can even do about the whole Kavanaugh situation, since everywhere you look, the response seems to be “register to vote” followed by “actually go to the polls on election day.” Or it’s “donate to civil rights organizations.” Those are all great things to do if you can, and you can learn more about registering and voting in our primer on the subject, but what if you can’t vote or can’t donate? Or if you want to take other steps?

I rounded up five things that don’t require voting, documented residency, other bureaucratic markers, or cash to make a difference.

Kavanaugh’s case highlighted the fact that we’re still having complicated conversations about consent, sexual communication, and how to be kinder with one another. Some of those conversations happen best spontaneously amongst friends — and not just in the heat of the moment. Consider using this as an opportunity to talk about consent and learn more about how other people approach the topic.

We advocate for enthusiastic consent, but consent is much deeper than a single yes. It’s about an ongoing conversation, and not just in the sexual sphere. Friendships often involve elements of consent, whether it’s “may I hug you” or “may I talk to you about an emotionally charged issue right now.” Expand the conversation about consent and think about how it applies to your own life; you have the right to your autonomy in any setting, whether the doctor’s office or a sexual relationship and your own home. And you can negotiate and renegotiate those boundaries, whether we’re talking about sexual intimacy or a friend who’s handsier than you’d like in casual social situations.

How do the people around you think about consent? How do you advocate for people who are having trouble articulating themselves, or who are not able to provide affirmative consent? When you see someone pushing another person’s boundaries, do you intervene? Do you have gendered ideas about what kinds of consent people give, and in what situations?

The Kavanaugh hearings and confirmation vote were extremely difficult for some victims/survivors of sexual assault, some of whom live in silence and couldn’t even speak out about why they were experiencing pain. Being mindful of survivors is a good idea all the time, because chances are statistically high that someone in your social circle has experienced harassment or assault, but especially when these topics are in the news.

Survivors may be struggling with feeling like their trauma has just been refreshed and then denied; for a moment, it felt like people were validating feelings of violation and abuse, and then Kavanaugh was confirmed anyway. But some people may also have been struggling with issues like not being the “perfect” survivor, or speaking up and being ignored because of who they are.

How can you care for a population that might not always be visible? Make it clear that you are working to make the spaces around you safer for survivors of sexual violence from all backgrounds, and all levels of healing. Shut down rape jokes, victim-blaming, and comments that can make environments feel hostile and unwelcoming. Promote affirmative, enthusiastic consent and gender justice, and be mindful that sex workers, people of color, disabled people, and others in marginalized groups are at greater risk of sexual assault, while simultaneously being less likely to be believed or helped when they speak out about it.

If someone does open up to you, tell them “I believe you” and “I’m listening” and let them progress at their own pace. Tell them you’re happy to help them connect with resources, but you respect their needs and choices.

The Trump Administration is launching systematic attacks on funding for sexual education — it’s getting harder to access comprehensive, age-appropriate sex and gender education in many parts of the United States. And while lots of opinion editorials recently have proclaimed the need for “consent education,” sex education is bigger than that.

Information about the full spectrum of human gender and sexuality helps you make informed choices about both your body and your heart. Everyone deserves access to that education, provided in a setting and format that’s conducive to education; no cheesy half-hour video in the gym, please!

Changes to sexual education curricula happen in a number of ways, and you can intervene at each step. In addition to relying on federal funds, sexual education in your area can come from the state and community organizations as well. All of this funding can come with strings attached — and you can be involved in the decisionmaking behind those strings by submitting public comments to the people and agencies involved.

You can also get active with your local school board, which has a tremendous impact on policy across your district. School board meetings are often poorly attended, and the elections are often uncontested, too. Consider attending meetings, or at the very least, reading the agenda packets and submitting comments. The more you go and engage, the more seriously they’ll take you when you comment on agenda items or bring up issues you want them to address; they say “politics is made by those who show up” for a reason.

For bonus points, check out the requirements for school board officeholders. You might be surprised by who’s eligible to run!

4. Advocate and Agitate at Your Own Pace

In coming years, a series of important cases will work their way to the Supreme Court, and Kavanaugh may decide their outcome. You may hear people saying “we should take to the streets” after unfavorable verdicts, which can be empowering and energizing, but isn’t an option for everyone, for a variety of reasons. You don’t need to explain or justify yourself if you can’t engage in direct action — maybe it would threaten your immigration status or health, or maybe it’s just too scary for you right now. That’s okay!

There are lots of ways to make a difference. If you don’t want to take to the streets (or even if you do!) there are lots of things you can do to support social change. For one thing, all those marches actually need a lot of logistics, from developing accessibility plans to making signs, and someone has to be at home to pick up the phone if people get arrested and need someone to bail them out. Being on the support team is a vital part of making change happen. So is participating in letter writing campaigns; joining social media events; attending local government meetings; starting conversations at the dinner table; pushing for changes in your classroom, and so much more. Do the work that you feel able to do, and support others doing their work — and if you are one of the people fearlessly taking to the streets or calling your representatives every morning, don’t give people a hard time if that’s not within their capacity right now.

Social change doesn’t happen overnight. If you’re angry right now, think ahead to your potential career as well as volunteering opportunities. Maybe you’re already thinking about going to law school and joining one of the many organizations using impact litigation — lawsuits that rely on a big case that could set a precedent, like Obergefell v Hodges, which legalized same gender marriage in the US — to make a difference. Maybe you want to become a social worker who supports people in immediate need; volunteer on a sexual assault hotline; run for office; or start a spa that offers free and reduced-cost hair and skincare to low-income people who want to look their best for job interviews. Start learning about what will help you achieve your dreams of a better world.

5. Participate in the Process, at Any Level

At times like this, it often feels like the system is broken, maybe even irreparably. How can someone win the popular vote and still lose the election? How come votes in some places seem to count for more than others? How can elected officials and the people they appoint blatantly engage in criminal activity and apparently get away with it? If you’re having these feelings of defeat and frustration, you are not alone.

But you are also in a position to make a difference, because you do care, and the work of caring people can change the world — or at least pave the way to make that change possible in the future. Dedicated, loving humans have always existed, even during extremely dark times, and some of them changed thing by working within the process, like Oskar Schindler, who saved over 1,000 Jewish people during the Holocaust by leveraging his Nazi connections, subverting the system in a pretty spectacular way.

While it may seem pointless, participating in the process really does make a difference, even, and maybe especially, when your participation is actually designed to fundamentally reshape the process because it’s messed up and unfair and you think it has the capacity to be better. Sometimes that can mean voting, at any level. It can also mean attending meetings and events, submitting formal comments, contacting elected or appointed officials who work for you, or even going to work for a government agency yourself.

Find the kind humans who care and are doing their best and support them. Find the unkind humans who are being cruel, and work to push them out. Because kindness does prevail through darkness.