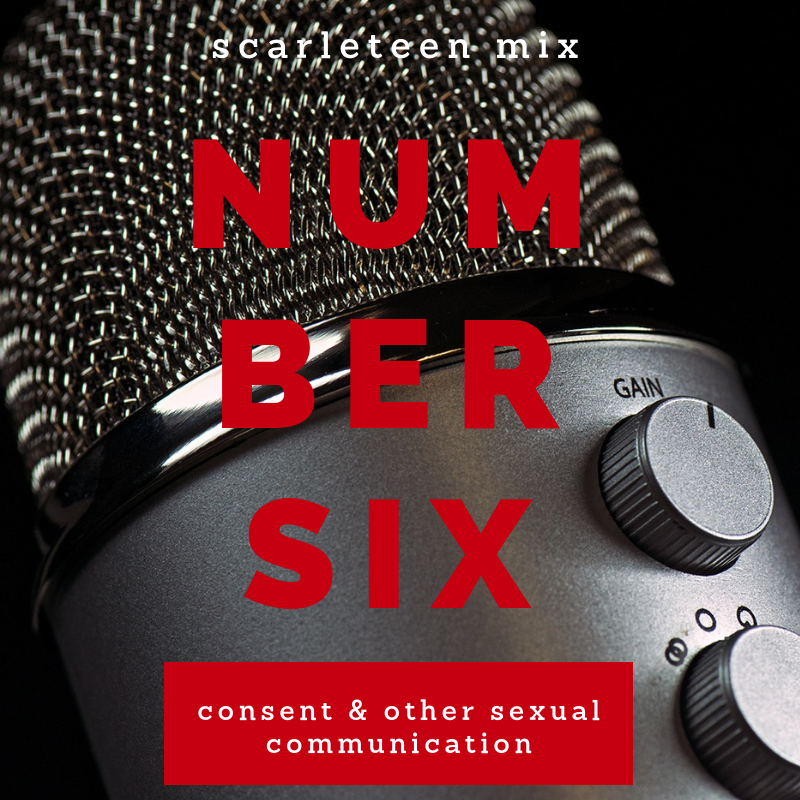 Real-deal consent requires clear, open and honest communication. And if we're going ahead and actually being sexual together in some way,  that also means an ongoing, nuanced and pretty highly situational process of communication, not just one or two super-quick, super-basic exchanges.

Not only is communication as a process essential to keeping it consensual, it's a big part of sex actually being any good for everyone involved.

I've noticed over the years that a lot of people have the idea that consenting and other kinds of sexual communication are like going through a drive-through window to pick up take-out.

Like: You roll up and see if the place is open. They are. You decide what you want from the small menu, if you look at it at all, since you usually order the same two things. You shout what you want at some random somebody. If they have the stuff you shouted out, they just give it to you and you give them money.  Maybe they ask one or two extra questions, like if you want fries with that or how you want your change. You answer those (or not), take your stuff, you each say thanks and you roll off as the guy behind you in his giant Dodge Ram starts honking, because of course he does.

The thing is, if you truly want to do this right, and if you're actually going ahead and being, and staying, sexually active with another person, consenting and other sexual communication should be a lot more like going to a long lunch at a nice restaurant.

So, something more like this: You roll up and see if they're open. They are, so you go in. Someone asks if they can take your coat, and if you want a table. You say you want a table, but you're keeping your coat with you. They ask if you want this table or that one? You choose that one. They say they’ll be back.  They come offer you water, and ask if you want sparkling or still?  You say still. They pour it. They ask if you want to hear their specials.  You say yes, they tell you. They give you two menus -- one for drinks and one for food -- tell you to take your time, and ask them any questions if you have them. There are a LOT of choices, so you do take some time, thinking about what you're in the mood for, what looks good, what you know you do and don't like, the works.

The come back and your order. You ask them if something on the menu can be adapted in a specific way for you: they say they're sorry, but it can't. You say you understand, and go with something else that looked good. You tell them not just what meal you'd like, but how you'd like it -- how you like it cooked, what you want served first if possible, what you want on the side. You order a drink, doing the same. They say they'll get those things going and you thank them.

They bring you your drink. You chill. They come back a little later to ask if your drink is okay and to tell you it's taking a little longer in the kitchen than anticipated. You say it's no problem, but thanks. Someone comes and offers you more water. You say yes, please. Your server then brings your meal, asks if it looks okay and if you need anything else. You actually notice your soup has something on it you're allergic to and tell them. They apologize and say they'll bring you another, and hope you will enjoy the rest of your meal while they get it. They come back with the soup, ask how your meal is, and you tell them it's awesome. They say it's actually their favorite, and you two talk for a little while about how much you both love the meal you're eating. They ask if you need anything else, and if you'll want to see a dessert menu.  You say you're good, and no thanks, you don't want dessert today.  They bring you the check, they tell you to take as long as you'd like, and you take your time finishing your meal. You pay it, tip your server, you thank each other and you roll on.

See the differences? How could you miss them? You'll find them in this mix, too: there's a whole bunch of back-and-forths and a wide range of not just ways to talk about sex, but different ways we might, whether that's about telling someone we're feeling when we're out with friends to call us the next day when we're sober, asking someone if they want to touch you, or telling a partner to slow down or not to touch some part of you.

Another thing I notice is how many people -- especially people who haven't ever been sexual with others before, or are really new to it all -- still seem to have this super-strange idea that consenting and other sexual communication in words is a drag, isn't sexy and somehow ruins the moment.

There are a lot of different things to say about that. For today, though, I think one of the most important things to know is that talking just at least enough to make sure everyone involved is truly on board, really wanting what's going on, and wanting it HOW it's going on, for every part of what you do, is vital, no matter what. That's because what actually ruins the moment are sexual abuse, assault and being or feeling unable to stop someone from doing something sexual to you that you don't want, really doesn't feel good or is freaking you out or otherwise has you feeling very not okay in some way. Sexual abuse, assault and otherwise being or feeling unable to stop something sexual being done to you you don't want, don't like or simply feels bad for you do very serious harm and usually create very difficult and long-lasting emotional, physical, interpersonal and even economic consequences for those victimized.

If you're going to worry about the impact of your sexual communication choices, I really hope you worry most about preventing serious sexual harm and trauma -- and participate in sexual communication and sexual choices that make make that harm prevention your top priority -- not the momentary, no-big-deal loss of your own or someone else's buzz or boner.

I think this is the second most important thing to know: it DOESN'T ruin the moment when the moment is everyone involved actually wanting to totally be there and to really be as close with each other as sex can put us. It is NOT a drag and is NOT unsexy to say and hear what's wanted and liked (and what isn't, too!), and how everyone involved is really feeling. Instead, what sexual communication can do in that context is not only prevent sexual trauma, but help everyone involved have more emotionally healthy, fulfilling and satisfying sexual interactions and sexual lives.

Maybe that's why so many of the songs in this mix  -- created and curated by me with some sweet additions from Sam, Jacob, Siân, Alice M. and Al , that you can listen to on Apple Music or Spotify -- sound so very good.