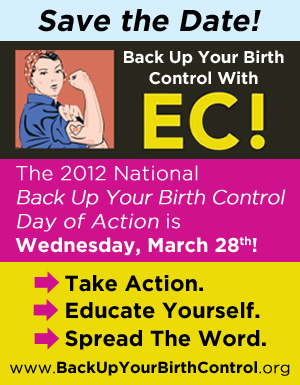 It's been a few months now since Heather posted "Back Up Your Birth Control Backup Day" making it crystal clear that, despite some pretty unethical misinformation given to young people seeking it, emergency contraception in the US is totally legal to sell to people 17+ without prescription.

It was few days later over here in the UK that I read a blog-post from a student in London that she had been refused emergency contraception, but not because of her age:

I went to a Boots pharmacy which said on the door come here for emergency contraception. So I went in and asked and the woman pharmacist told me that due to her religious beliefs she was unable to serve me the morning after pill.

Which had me asking myself what the law actually is in the UK.

Despite not having a uterus of my own, I've still bought emergency contraception with a partner and would appreciate knowing. After doing a bit of research, and with some help from the wonderful Dr. Petra Boynton, here's what I found out:

The age you can legally consent to medical treatment and to sex are the same; 16 in the whole of the UK.

So: if you're 16 you're legally considered completely capable of making the decision to get contraceptives on your own. If you're younger, then the law is flexible so that you can receive it if the pharmacists feel you're mature enough to understand the treatment. In theory this just means the law recognises your maturity, as reflected in your ability to make decisions for yourself even if you're under 16. Many pharmacies won't serve under-16s without a prescription, but they are allowed to.

The policies on that are often standardised accross a local area. That given, if you're under 16 and having sex it's worth finding out whether, in your local area, you'll need to get a prescription by going to your GP or an NHS Walk in centre, etc, or if you can just buy it over the counter. Being a young person can also mean you might be able to get it for free, but this varies around the country.

Buying for someone else:

In the UK, pharmacies explain to you what the medication does and how to take it and they get you to sign something saying you understand. Unfortunately, that means it doesn't allow for a friend or partner to go get it for you.

The pharmacists I spoke to on the phone who were pro-choice actually defended the main way in which UK regulation differs from US regulation. In the US, as outlined in Heather's blog post, workers are legally obligated to serve you, whereas in the UK, the General Pharmaceutical Council (i.e. the GPhC, who control the registration of pharmacists) outline that on Religious Grounds you may be refused emergency contraception, however the pharmacist must inform you that this is why they are refusing you (they can't tell you some other false reason) and they then must direct you to an alternative venue for buying it so long as it will be realistically accessible to you in the time frame, otherwise they're guided to serve you.

This is all in the guidance and standards aimed at pharmacists and published by the GPhC.

You [ie the pharmacist] must:

2.2  Make sure that your professional judgement is not affected by personal or organisational interests, incentives, targets or similar measures

2.4  Be prepared to challenge the judgement of your colleagues and other  professionals if you have reason to believe that their decisions could affect the safety or care of others

2.5  In an emergency, consider all available options and do your best to provide care and reduce risks to patients and the public.

3.4  Make sure that if your religious or moral beliefs prevent you from providing a service, you tell the relevant people or authorities and refer patients and the public to other providers

The above exerpts are from the GPhC's Standards of conduct. ethics and performance.

The following is from Guidance on the provision of pharmacy services affected by religious moral beliefs.

• If you do not supply Emergency Hormonal Contraception (EHC), (either over the counter or against a prescription) women should be referred to an alternative appropriate source of supply available within the time limits for EHC to be effective.

• If you do not supply Routine Hormonal Contraception, women should be referred to an alternative appropriate source of supply available within the time period which will not compromise the woman’s contraceptive cover.

• If you refer a patient to a doctor’s surgery or hospital you should think about whether  the patient will be seen by a doctor or other appropriate practitioner within the timeframe required for treatment to be effective (i.e. consider factors such as the practice’s opening hours and whether the patient will be able to get there).

• If you refer a patient to another pharmacy, check that there will be a pharmacist available there who can provide the service and that they have the relevant stock.

2.7 Patients should not be discouraged from seeking further information or advice.

This is the level of service you should expect if someone calls themself a pharmacist. No lectures, just a disclosure of their bias and the information you need to get the EC you need in time. Or if you're out of time, the EC itself.

Perhaps we'd be better off if emergency contraception could be seen for what it is, a medical and societal necessity instrumental to equality and female empowerment, and plenty of people would like it to be mandatory part of the job. On the other hand, it might be better to have this official provision for refusal and a procedure for it, rather than for those opposed to EC within the profession to turn to tactics like lying about age restrictions.

Either way, at least in established policy, you should be able to get what you need when you need it.

If you'd like a similar printable fact sheet with a complaints phone number for the GPhC you can also download it here: Standards of conduct, ethics and performance.pdf

Guidance on the provision of pharmacy services affected by religious moral beliefs g.pdf