Sexuality In Color: Queerness in "The Land of Many Waters" 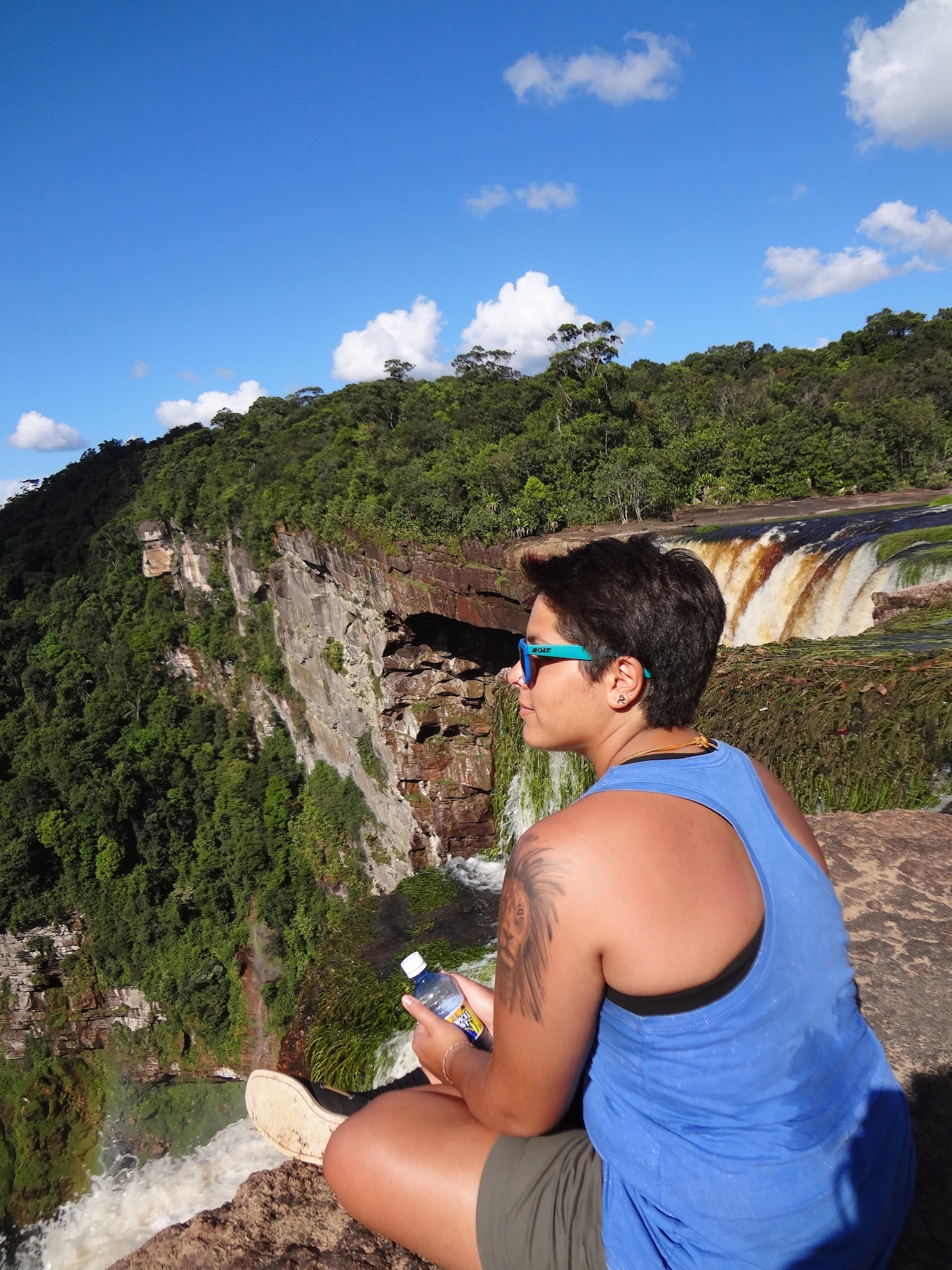 This is a picture of me taken several years ago: I’m sitting by the world’s largest waterfall by volume. Kaitur Falls is located in Kaitur National Park, in the heart of a small South American country called Guyana. In this picture, I’m wearing linen shorts, a light blue tank top, and sneakers. I have short hair, I’m wearing electric blue sunglasses, and a large tattoo of a lion is clearly visible on my left shoulder. I’m sitting and looking out at the lush landscape, and I look sweaty and like I’m deep in thought.

I don’t think that I’ll ever forget this moment, because the sight was just so beautiful. The water was roaring over the top of the waterfall, and cascaded down into rainbow mists that covered the valley below. All the trees and plants were the greenest green that I could possibly imagine, a far cry from the arid desert landscape that I grew up in. The sky was so blue, and the only sounds I could hear were the sounds of the waterfall, of my family talking nearby, and the distant call of birds and monkeys from the nearby jungle. The natural and uninterrupted beauty of everything was stunning. It made me feel small, but in a very good way.

Guyana, or the "Land of Many Waters," is one of the lesser-known South American countries. It was a colony of the British Empire up until it fought for and gained independence in 1966, and so the main language spoken there is a Creole-adjacent Guyanese vernacular form of English. Most of the people there are either Afro-Caribbean or Indo-Caribbean, depending on whether their great-great-grandfathers were brought to Guyana as slaves from Africa or indentured laborers from India. It’s nestled between Venezuela and Suriname (formerly “Dutch Guiana”) and shares a border with the northeast region of the Amazon rainforest in Brazil. Guyana is home to about 700,000 people, which is roughly the population of the city of Seattle spread across a land area the size of the entire state of Washington. It’s the eighth least populous country in the world, because most people live in or around the capital city, Georgetown, and almost everywhere else is relatively untouched jungle.

This trip was a difficult one for me, for many reasons. The heat, the humidity, and the mosquitos were one aspect, and then the struggle of diaspora was another. My grandmother, my mother, and my mother’s siblings left Guyana and headed to England during the revolution and hadn’t been back since. 40-something years had passed, and I’m sure that the people and the landscape changed quite a bit during that time. My mother was eight years old when she left, and she had only a few vivid memories of the house and the village that she grew up in. Coming back to Guyana meant that there were a lot of painful relationships and memories that resurfaced for my mother and her family, and a lot of unresolved tension and unspoken conversations among the grandchildren. The landscape held a lot of narratives and experiences that simply aren’t talked about in my family.

This trip was also emotionally taxing for me as a queer person. At the time, I was identifying as a lesbian, and I was the only outwardly queer person in my family. I had actively chosen to not shave my body hair, I had a short haircut (including a funky blue stripe!), I didn’t wear makeup, and I wouldn’t be caught dead in a dress. This was in stark contrast not only to the other members of my family, but also the traditional gender roles that Guyanese people tend to rely on (women as mothers and homemakers, men as authoritative providers).

When my family would walk out in public, we would all get stares and looks from locals because a) we were dressed differently, b) we had much lighter skin, c) our accents and mannerisms were different, and d) there was one member of our party that didn’t seem to fit neatly into either category of “woman” or “man” (a.k.a. yours truly). At least once I was asked by a distant relative why I dressed like a man, but most of the time the confusion and/or discomfort about my appearance came in the form of dirty looks. If it weren’t for the rest of my family (including my large, muscled uncles who went everywhere we went), I definitely would have felt unsafe.

Guyana is generally considered to be a fairly conservative country in terms of LGBTQ rights. “Homosexual activity” and same-sex marriage are still outlawed, and there is no legal protection for gay or transgender people against discrimination in public places, employment, healthcare services, or law enforcement. Homophobic and transphobic legislation like this is a remnant of the “common decency” laws of the British Victorian era, inflicted on Guyana by a colonial infrastructure and abandoned when the small country gained independence. Because of the reinforcement of this intolerant attitude and the lack of legal protections for LGBTQ folks, instances of violence fueled by homophobia/transphobia are common.

In 2017, Petronella Trotman, a transgender Guyanese woman, was attacked in the street over her gender identity and expression, and when she sought justice through the legal system, she was denied access to the court during her own trial because she was wearing clothing deemed “inappropriate for a man.” Her treatment was based on a law written in 1893 (when Guyana was still under British colonial rule) stating that men dressing in “female attire” is illegal if done for an “improper purpose.” Note that there is no set standard for what constitutes as cross-dressing or what constitutes an “improper purpose,” and the law leaves out women who wear “men’s clothes” entirely. The vagueness of that language means the law is interpreted however the law enforcement officer wants it to be interpreted, which leaves very little power in the hands of LGBTQ individuals. (This cross-dressing law is currently under review and oral arguments are being heard at the Caribbean Court of Justice.)

But none of this means that queer and trans Guyanese people don’t exist — we’re here and we have been for centuries. (In fact, the only other Guyanese person I’ve met outside of Guyana is queer as well!) Just like the U.S., the United Kingdom, or any other nation, when discrimination and bigotry are rampant, those of us in marginalized communities come together in our fight to survive and thrive. Guyana just celebrated its 50th year of independence from the British Empire and is continuing to develop and distinguish itself as an independent republic. While infrastructure grows and changes, there is more and more support for Guyanese members of the LGBTQ community (or LGBTQ members of the Guyanese community).

Organizations like the Society Against Sexual Orientation Discrimination (SASOD), Guyana Trans United (GTU), and the Guyana Rainbow Foundation do the good work on the ground level to push back against outdated legislation and seek justice for victims of homophobia and transphobia. These folks are absolutely instrumental in the movement; they show up and take up space, demanding that their right to respect and community be recognized based on their humanity. In fact, on June second of this year, these organizations came together for Guyana’s first ever Pride parade, held on a main street of the capital. While the crowds pictured weren’t as big as in Pride parades in New York, LA, or San Francisco, the folks that were there were loud, and proud, and beautiful.

I can’t look at this picture without feeling a confusing tangle of sadness, gratitude, and admiration for all the queer and trans Guyanese people and their allies who marched on that day. I can only imagine what it felt like to walk through the streets, singing, waving rainbow and multicolored flags and banners, side by side with family and friends who believe that everyone should be able to freely be who they are and love who they love.

It makes me feel grateful that I have that ability (when I have ability) here in the United States. It fills me with pride, in every sense of the word — proud to belong to a nation that is trying to make itself better, proud to be part of a community determined to exercise love in the face of hate, and proud to embody the unique combination of these identities (and more!). Marching in that Pride parade must have been terrifying and exhilarating at the same time — kind of like what it felt like to walk through the streets of Guyana with my family or sit at the edge of the world’s largest waterfall.

My existence is resistance. I am a queer Guyanese American.