Is part of my vagina hanging out?

This is a little bit embarrassing but one part of my vagina hangs out by about two centimeters and I'm really self conscious about it, and I'm worried it isn't normal. Sorry if this is an obvious question I just really need an answer.

In a world where we all got filled in on the specifics of our genitals really well, it'd be an obvious question. But since most people don't, a lot of people have questions like this, all the time. It's no sweat, and there's no reason to feel foolish for asking.

Let's first make sure we're on the same page, okay? 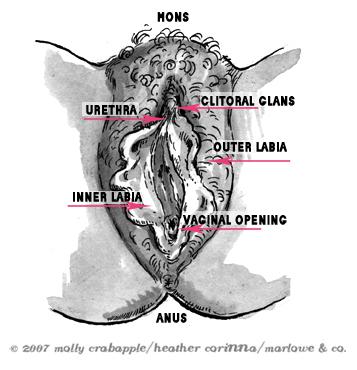 Here is your vulva, the entirety of your external genitals. A lot of people call the vulva the vagina, because we were simply taught the wrong word for your genitals. If you need to understand more about what's what, click here. if you click on that link, you'll see another illustration which is a cross-section of the female pelvis, and on which you can see where the vagina really is.

As you can see -- or rather, as you CAN'T see -- your vagina is part of your internal reproductive anatomy. We can see the opening from outside, but that's it. Most of the vagina is a tubular muscle that runs from the vaginal opening to behind the cervix, deep inside your body.

If, in fact, something is hanging out of your vaginal opening a little bit, then what that likely is is some residual hymen, the thin tissue that when you're younger, covers the vaginal opening, but which as you develop, wears away. It's normal for it to sometimes wear away in such a way that some of that tissue hangs around like that, and in time, it'll wear away further to the point where it's not visible anymore. It's nothing to be embarrassed about, but since it's not something that has any purpose at all (or nerve endings), and something which is supposed to wear away in time, if it's really bothering you, you can ask a gynecologist to snip it off for you.

If you don't mean your vagina, but mean your vulva, and you're talking about seeing something sticking out of your outer labia -- the two thicker mounds of skin, usually with some hair on them, which meet to cover your vaginal opening, urethra and clitoris -- it's likely that that's just your inner labia -- the fleshy, hairless "lips" that are between your outer labia, and which connect at the top to your clitoral hood -- peeking out. The length, size and shape of inner labia varies between women, and it's perfectly normal to have inner labia that stick out from the outer labia. That's nothing to feel funny about: lots of women have inner labia which aren't totally hidden by the outer labia.

Too, if you have shorter outer labia, and a larger clitoris or hood, it may even be that part of your clitoral hood and/or your inner labia are visible outside your outer labia. That's also okay.

Either way, I'm willing to bet what you've got going is completely normal. But if in doubt, you can always ask a gynecologist to take a look at it. It's wise for women to start going to the gynecologist for preventative health exams once a year once menstruation starts, and vital for women to go every year once they become sexually active. So, if you haven't started going yet, now might be a great time to hop on that, since you also can get a second option from someone who knows better than most what normal vulvas look like.