The Answers (for Now) - Ben 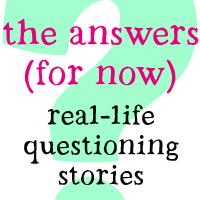 I guess questioning probably goes back to college. Not from experience, as all the people I felt seriously attracted to in college were women, but there was a fad at that point in the 90s of getting together with friends and taking "purity tests," long inventories of questions probing what you've done sexually and with whom (other "transgressive" topics were covered, but the focus was usually sexual). There were a lot of things on there where I'd think "eh, I could potentially do that with anyone, maybe."

And in general, I felt increasingly disconnected from our culture's pervasive ideas of masculinity and straightness. I didn't know what else I was, but I clearly wasn't tied to that. At one point I liked the phrase "straight but not narrow," which I find kind of problemetic today, but I see where I was coming from.

Also cross-dressing for an event a couple times was fun, so.

When I dated a dude. It should be noted that this happened in my 30s, so it wasn't resolved for a long time.

If I need a word, I now use bisexual. Queer also works, depending on context. Some days I'm more drawn to general fluidity than particular terms, but on the other hand, given the amount of biphobia I've seen in both straight and some queer spaces, I lean towards using it as maybe some small help from my position of relative privilege (white, male, in a relationship that's straight-passing to people who don't know me yet).

My feelings are generally positive; questioning and exploring are good things. Gender and sexuality can be fluid, so being continuously open to questioning is something I see as positive.

The one thing that probabaly gave me the most trouble along the way, and still does sometimes, is a case of imposter syndrome. Statistically, I'm more frequently attracted to women than men, so do I "deserve" to claim the bisexual label? Of course, I've long subscribed to the notion that there's no "right" way to be queer/trans/etc, so I strive to apply that principle to myself as well.

As mentioned above, dating a guy was when I finally convinced myself, yeah, I can just identify as bi.But being comfortable with fluidity and queerness in general was a much longer process beforehand.

I had friends who knew I was queer before I did. I don't know that I ever talked a lot about it, but their general acceptance and love definitely helped me along.

Don't sweat the labels too much. Embrace whatever feels right, and defining yourself can follow after. Or not! It's always an ongoing process.