Some Books and Balms for Nonbinary Folks

I've been alive long-enough to watch the Western cultural progression from having nothing but "androgynous" -- a category which was always very limited, particularly in the presentation it demanded, one which simply wasn't attainable for nearly anyone who wasn't white and very thin -- to terms and frameworks that came out of the late 1980s and early 1990s like genderfluid and genderqueer. I've seen all the fun made of gender-neutral pronouns and neopronouns as both cisgender feminists and QT+ folks attempted to use them over decades. I've watched more and more progressions of gender frameworks get us to where we are now. It’s been quite a journey in this half-century alone. So, it's quite an awesome thing to witness a whole Nonbinary Awareness Week, centered around International Nonbinary People's Day (On July 14th), which just celebrated its 9th anniversary this year. It’s especially something to take in as someone who sure could've used our newer frameworks and the still grudging, but at least slowly growing, cultural acceptance for them frameworks long, long before now.

When I was a kid, I was involved in an accident in which I violently mangled two fingers on my dominant hand.  There's a whole long story about it and how I got to the hospital which I'll tell you someday if you have a minute, aren't squeamish, and like stories about rich guys getting their nice sports cars messed up by adrenaline-fueled single moms. Part of that story involves a guy who found me after it happened in his alley. He called my mom and told her that her little boy had hurt his fingers. My mother said she didn't have a little boy, only two daughters, but that she was a nurse who lived down the block, so would come anyway.  Apparently my tomboy style (overalls forever!), my bravado, and my swearing instead of crying (I was so sure I was going to be in big trouble: I mean, I got in big trouble for losing my mittens, imagine what was coming for losing what went INSIDE them) gave this guy a gender message he read as not-girl, and thus, boy: we absolutely only had two options in the mid 1970s, see -- girl or boy.

Every time my mom told that story it made me feel amaaaaaazing. I think people would often assume that was because I didn't like being a girl, specifically, or that I wanted to be a boy instead of a girl.  But really, what made me feel good -- still does! -- is not either of those things, but that this person didn't know what my gender was. That he couldn't read me, period, and didn't read me the way most people usually did.

That was a rare moment of gender euphoria for me growing up, and honestly, in my life, period, because, as a person who just really doesn't internally experience a feeling of any gender at all -- a thing it took me a long time to figure out for myself, and longer still to brave trying to fully express to more than but a few other people -- that's the kind of thing I need to have those good gender feelings come from the outside: for people to, most ideally, not assign me any gender at all, or, if they do, for them to assign me something besides my assigned sex, or what my body parts apparently "tell" them I must be. I've always been one of those people that no matter how I present -- yep, even in baggy clothes and a shaved head, even ripped with muscles, you name it, I've probably looked like it -- people assign me a feminine gender. Perhaps, whether that’s your exact issue or not, you can relate.

I know how hard it can be to be nonbinary in a binary world. I know that weeks like this week and days like Wednesday can be great, but they also only make the rest of the year so much easier. Heck, they only make this week and that day so much easier. I've been misgendered myself badly within this week alone, and it'll probably happen again before the day is out. I get it. The newer frameworks we have now, if I do say so myself, really are better, and hold so much more of us than some of the ones that came before. But they cannot undo the colonization that brought about the binarization of gender in the first place (not to mention all of the other kinds of horrors colonialism and white supremacy has wrought and still does every minute of every day), and eradicated, erased or reduced all of the gender expansive indigenous frameworks of gender and the people who created and lived them.

They also can only do as much as the number of people who'll accept them, and accept those of us who they represent. If this last week didn’t actually make you feel any better, I get it. If this last week maybe even made you feel worse, I get that, too. Sometimes these kinds of awareness weeks or days can just be a reminder about what we wish we had and don’t have: visibility, acceptance, affirmation, understanding, a sense of belonging -- from our communities, from our friends and families, sometimes even from ourselves. Sometimes the very things meant to make us feel less alone can actually make us feel more alone. If you’ve felt or are still feeling that way, I’m so sorry that you are. I hope that however alone or isolated you’re feeling in this right now, this can maybe be the last day you feel that isolated or alone, and that from here on out, little by little, you can feel less so as the days, weeks, years and decades go on.

As a writer and a reader, books have always been my constant companions: when I feel alone and isolated, they're one of the first places I turn. We've got you here in our direct services at Scarleteen (and if you want to talk to a nonbinary person specifically, you can always ask for, or email, me or one of our other nonbinary team members, like Ruby, Val or Jacob), but if you also like the company of books, here are a few books I like from nonbinary writers, about nonbinary identities and thought, relevant self-care or help sorting things out for yourself, and a couple of my favorite nonbinary or trans balms for the soul.

Nonbinary: Memoirs of Gender and Identity, edited by Micah Rajunov and Scott Duane, and In Their Shoes: Navigating Non-Binary Life by Jamie Windust: Do you need more nonbinary people in your life? Are you craving nonbinary friends, family and community? If you're having a hard time finding it in person or online, or you have it but want more, or more diversity in yours, these books can deliver that for you.

Beyond the Gender Binary, by Alok Vaid-Menon: Alok is amazing, and so it's no surprise that their book is also amazing. If you want to feel held as a gender-nonconforming person and also get some practical help navigating life lived as one, this book is a great starting place.

Life Isn't Binary: On Being Both, Beyond, and In-Between, by Meg-John Barker and Alex Iantaffi: This book is about nonbinary gender, but it's also about questioning and deconstructing binaries in bodies, sex, relationships, and even our emotions and ways of thinking. It's kind of amazing, seriously.

Gender Identity Workbook for Teens: Practical Exercises to Navigate Your Exploration, Support Your Journey, and Celebrate Who You Are, by Andrew Maxwell Triska, LCSW: If you want help figuring gender identity out for yourself and are someone who needs or likes focused, tangible reflection and step-by-step walkthroughs get you there, this new workbook is DEEPLY great for that. I'm 51 years old and have had a good handle on sorting out who I am over time and I am setting aside some time for myself so that I can get to do this freaking awesome workbook for my own self. It's so good. 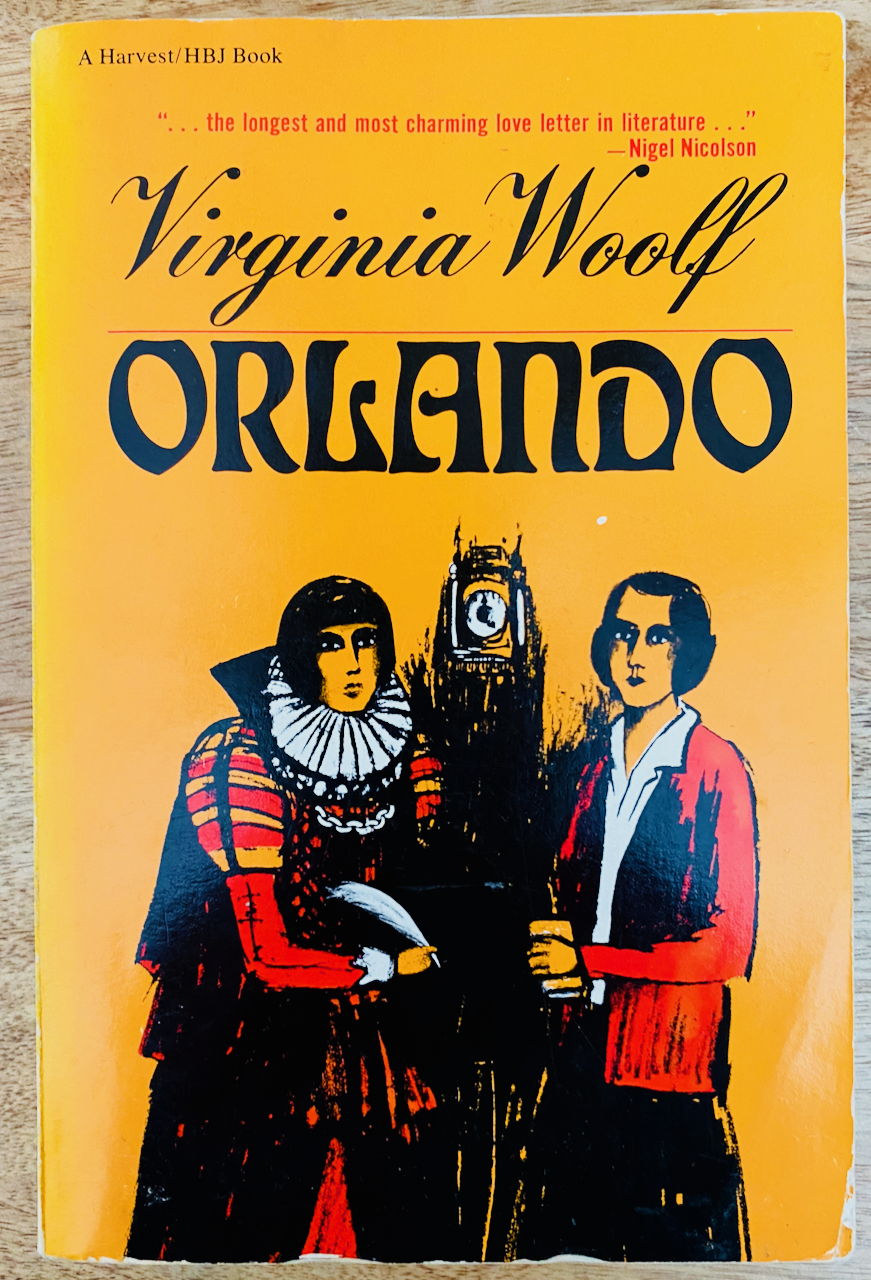 Lastly, a few of my personal favorite balms for my own nonbinary soul: Leslie Feinberg's Trans Liberation (and you can also find, per hir wishes before dying, a free PDF copy of Stone Butch Blues via that link), S. Bear Bergman's The Nearest Exit May Be Behind You, and Virginia Woolf's Orlando.

I hope if you're a nonbinary person -- or you feel like you might be --  that if you haven't already, you take some time to give yourself some affirmation, respect, care and love. Please know that you belong: to yourself, and period, even when it doesn't feel like it, and even when there dosn't feel like there are places were we can wholly belong, or communities to belong to, or that will wholly have us. In the event that the rest of the world doesn't seem to get that, or when it expresses the opposite at any point, as it all too often does, this passage from Orlando might be helpful to keep in mind:

At one and the same time, therefore, society is everything and society is nothing. Society is the most powerful concoction in the world and society has no existence whatsoever.”