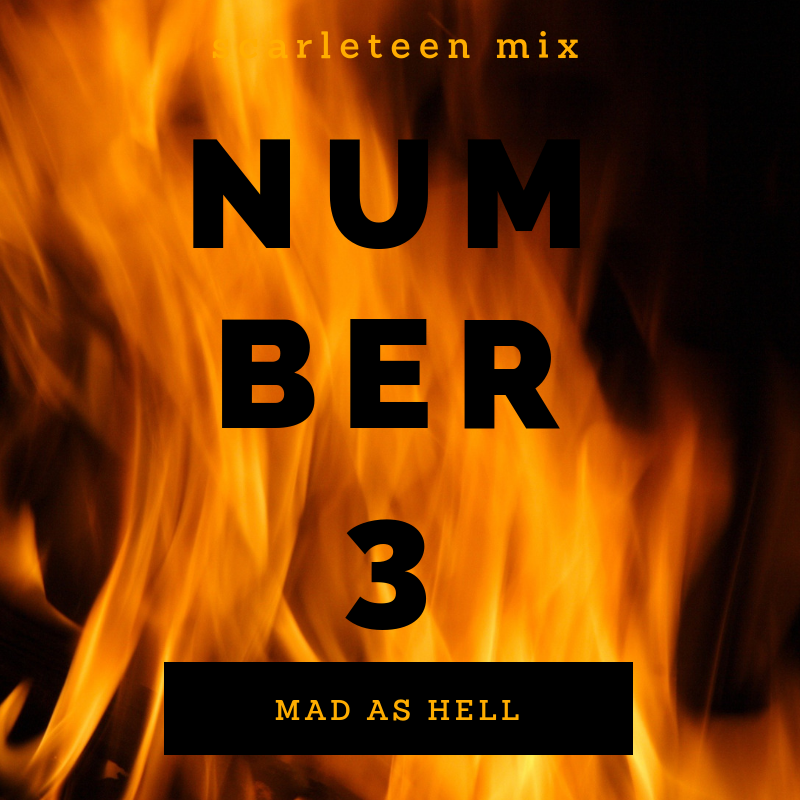 We are mad as hell.

Come rage with us on Apple Music or Spotify.

This third mix (you can find the first one here and the second one over here) is brought to you by myself and fellow Scarleteamsters Mo, Jacob, Sam, Alice, Al and Ruby.

What can we say? The world has been a raging dumpster fire, most certainly including all of the awful things the American government as led by the Trump administration and its various fellow bad guys have been doing, like continuing to personally profit from their positions to endlessly denying climate change at our great peril, to again picking up the horrifying colonial tradition of abducting people's -- and by that we mean mostly brown people's -- children and pretending like that isn't what they're doing (it is what they are doing, and it's more complex and also even much, much worse than it seems), just to name a few of the many big, bad things happening every single day in the country Scarleteen makes its home base.

And then, as if all that wasn't horrible and heartbreaking enough, there was the Kavanaugh nightmare. There was everything around it -- including all of the constant gaslighting we who are survivors had to keep listening to, much of it literally coming from the people in charge of this nation right now --  there was the hearing, and worst of all, because of course it was going to happen no matter what, the confirmation to a seat on the Supreme Court in spite of everyone knowing full well that Christine Blasey Ford, Deborah Ramirez, Julie Swetnick and others were telling the truth when they told us who Brett Kavanaugh was. Including because Brett Kavanaugh himself was showing us that same truth of who he was in his every response.

It's almost impossible to really give voice to the whole of our feelings and have them come out as anything but guttural screams. But s.e. smith wrote up a solid list of things we can do, and super-power with our sadness, our outrage, and our anger. Scarleteen supporter and all-around force of nature Deanna Zandt also came up with a way to give some wearable visibility to survivors and benefit Scarleteen in doing all we do to educate people about consent, to support survivors and to do all our other work here. So many people we admire have said and done so many things in the last few weeks, it would be impossible to chronicle them all, but one thing we think you probably shouldn't miss are the things Tarana Burke, founder of #metoo, had to say here, including this:

I don’t think there’s anything wrong with the rage because it’s a righteous rage. This is not people just angry to be angry. These are people who are hurt. One of the things I want to do at some point soon is to call for a healing. We rally around causes, and we protest and we march, but we don’t ever take time to just sit and focus on what we personally need. Some people need this in this moment.

Rebecca Traister had some things to say in the midst of all this awful that speak mighty well to some of the feelings we're trying to work out in this mix. She said:

If you are angry today, or if you have been angry for a while, and you’re wondering whether you’re allowed to be as angry as you feel, let me say: Yes. Yes, you are allowed. You are, in fact, compelled.

If you’ve been feeling a new rage at the flaws of this country, and if your anger is making you want to change your life in order to change the world, then I have something incredibly important to say: Don’t forget how this feels.

Tell a friend, write it down, explain it to your children now, so they will remember. And don’t let anyone persuade you it wasn’t right, or it was weird, or it was some quirky stage in your life when you went all political — remember that, honey, that year you went crazy? No. No. Don’t let it ever become that. Because people will try.

The future will come, we hope. If we survive this, if we make it better — even just a little bit better — the urgency will fade, perhaps the ire will subside, the relief may take you, briefly. And that’s good, that’s O.K.

But then the world will come and tell you that you shouldn’t get mad again, because you were kind of nuts and you never cooked dinner and you yelled at the TV and weren’t so pretty and life will be easier when you get fun again. And it will be awfully tempting to put away the pictures of yourself in your pussy hat, to stuff your protest signs in the attic, and to slink back, away from the raw bite of fury, to ease back into whatever new reality is made, and maybe you’ll still cry angry tears at your desk and laugh with sharp satisfaction in front of late-night television, but you won’t yell anymore.

What you’re angry about now — injustice — will still exist, even if you yourself are not experiencing it, or are tempted to stop thinking about how you experience it, and how you contribute to it. Others are still experiencing it, still mad; some of them are mad at you. Don’t forget them; don’t write off their anger. Stay mad for them, alongside them, let them lead you in anger.

This is a mix we made you for you to shout back to the world with when it has the audacity to tell you not to get mad again or stay mad. (There's a lot of swearing in it, because no shit there is.)